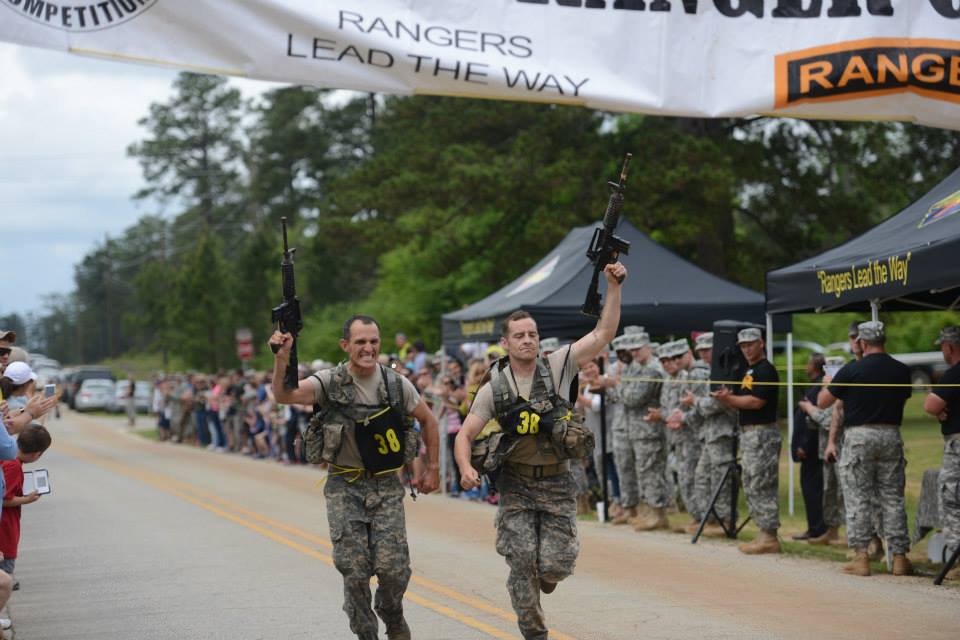 Sgt. 1st Class Jeremy Lemma and Sgt. 1st Class Timothy Briggs earned the title of “Best Ranger” on Sunday, April 12, after three days of intense competition.The two NCOs, from the Airborne and Ranger Training Brigade at Ft. Benning, Ga., eclipsed 51 other two-man teams to win the 2015 competition.  Briggs is a veteran of the event, having achieved victory in 2013 with a different partner.Of the 51 teams at the starting line, only 24 made it to the final day of competition.Coming in second were Capt. Robert Killian and Capt. Travis Cornwall, Army National Guard.Third place went to Staff Sgt. Philip Jewah and Sgt. Thomas Malphrus with the 75th Ranger Regiment.This year marked the 32nd anniversary of this storied competition.  It began in 1982 in honor of Lt. Gen. David E. Grange Jr., a veteran of 20 campaigns in three wars as an infantryman. Grange also served as director of the Ranger Department, and later commanded the 2nd Infantry Division and the U.S. Army Infantry Center.Speaking at an awards ceremony held Monday, Lt. Gen. Grange said it is “a privilege to call yourself a Ranger, and a privilege to be around this kind of Ranger.”Adding, “The spirit of the American Ranger is just as strong today” as it was when the Rangers were established over 200 years ago.Events during the competition are held back-to-back over 60 continuous hours, and teams cover over 60 miles of ground with no programmed sleep. Specific events include marksmanship with pistol, rifle and machine gun, an airborne operation/spot jump, day and night demolitions, and a 20+ mile ruck march, to name a few.For more information, visit http://www.bestrangercompetition.com/.