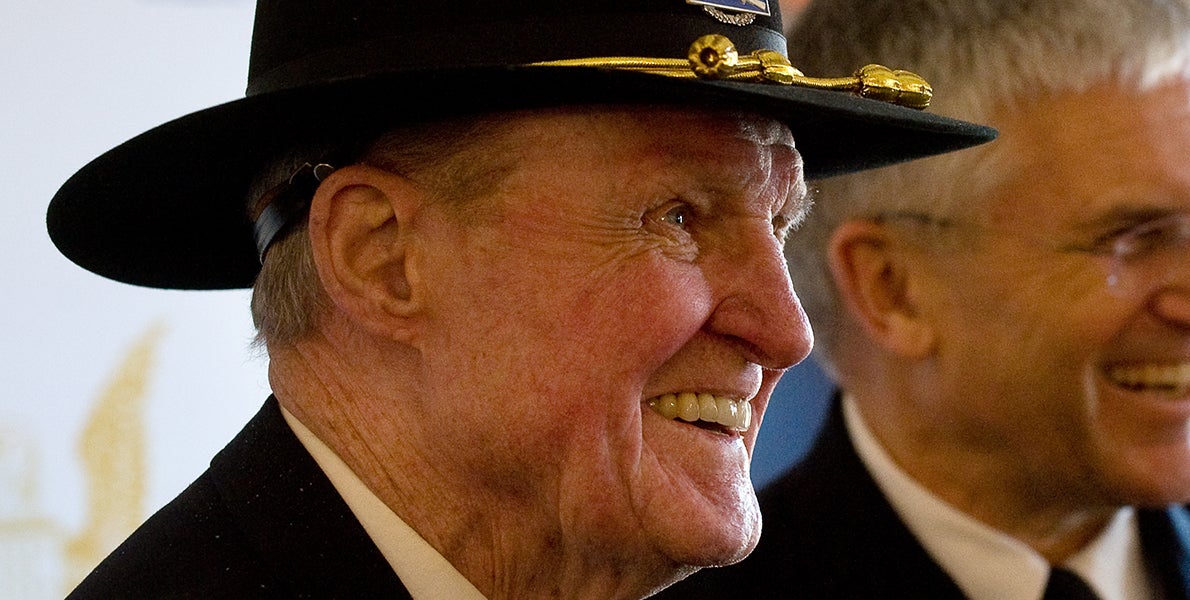 Infantry icon retired Army Lt. Gen. Harold “Hal” Moore Jr. will be buried Feb. 17 at the Fort Benning, Ga., post cemetery following a memorial service at the National Infantry Museum. The 94-year-old died Feb. 10 at his home in Auburn, Ala.

Outside the Army, Moore was best known as the co-author of “We Were Soldiers Once, and Young,” a book describing actions of the 1965 Battle of Ia Drang in Vietnam, when he was a lieutenant colonel and commander of the 1st Battalion, 7th Cavalry Regiment. The book became a 2002 movie, with actor Mel Gibson playing Moore.

Inside the Army, Moore is known as a legendary combat leader and strategist. Retired Army Gen. Carter F. Ham, Association of the U.S. Army president and CEO, said he met Moore at Fort Benning in 1990 “when he spoke to the Infantry School about his experiences at LZ X-Ray. I was privileged over many years to see him as he continued to mentor developing leaders. He exemplified the Infantry motto, Follow Me!”

Moore was a 1945 graduate of the U.S. Military Academy whose Army career spanned 32 years, including combat tours in Korea and Vietnam. His first military assignment was attending the Infantry Officer Basic Course at Fort Benning, and his first overseas tour was in Japan, where after completing jump school he volunteered to be part of experimental parachute testing. “He tested parachutes, surviving multiple malfunctions to include being hung up and towed behind a plane,” the Army said in a press release describing Moore’s career.

In the Korean War, Moore was assigned to the 17th Infantry Regiment, 7th Infantry Division, commanding a heavy mortar company and an infantry company, and also serving as a regimental operations officer.

He later commanded a battalion of the newly formed air mobile 11th Air Assault Division as it was undergoing air assault and mobility training and testing at Fort Benning. He taught tactics at West Point, worked in development of airborne and air assault equipment, had a tour in Norway and attended the Naval War College between the Korean War and Vietnam War.

In the battle covered in his book and movie, Moore’s unit was vastly outnumbered by Peoples’ Army of Vietnam soldiers. “After a three-day bloodbath, the enemy quit the field leaving over 600 of their dead littering the battleground,” according to the Army biography.

During the post-Vietnam years, much of Moore’s career focused on creating and improving education for officers and noncommissioned officers, and he also played a major role in shifting to an all-volunteer force.

“Hal was personally modest with a deep love for soldiers,” the Army biography says. “When his hometown announced it would celebrate his return from Vietnam in 1966 with an elaborate Hal Moore Day, he refused to participate unless the event was refocused to be a Vietnam Veteran’s Day. Likewise, while his funeral and memorial service will necessarily center on him, he would not want us to forget all Americans who served.”