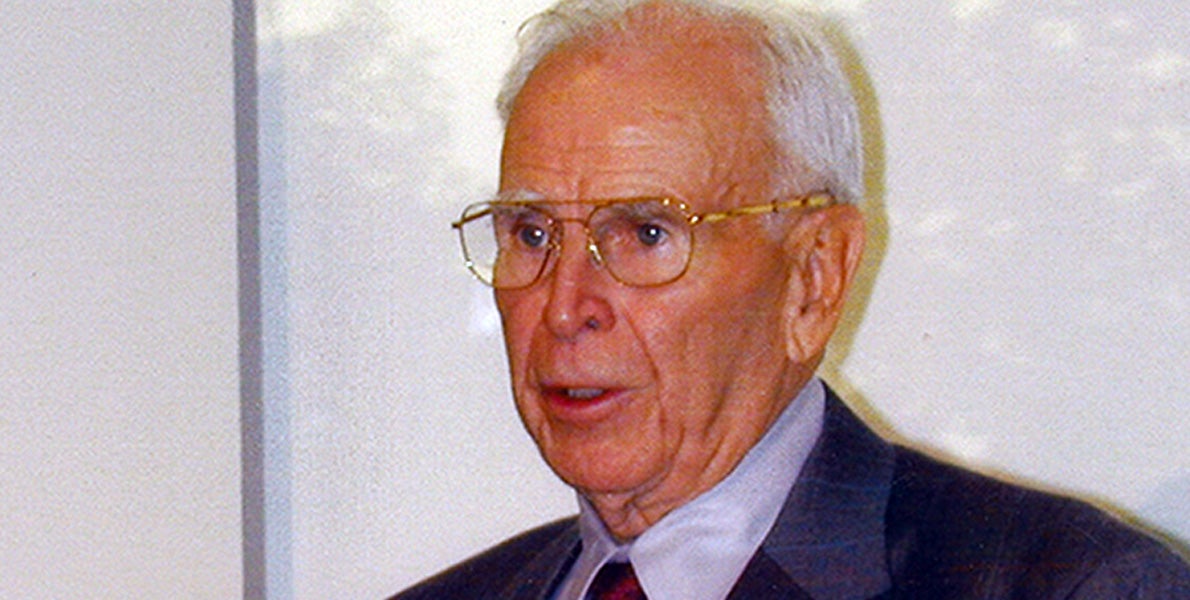 The 94-year-old was Army vice chief of staff in 1982 when he was selected by President Ronald Reagan to be the military’s top uniformed leader. When he retired in 1985 after 46 years of service, he was the last four-star World War II combat veteran still on active duty.

In his humble retirement speech, Gen. Vessey said that during his morning run, he had thought about all of the great and inspirational things he might say. “As I thought about Arlington Cemetery in which all those gravestones are there for all the other ‘indispensable’ people who preceded me, I was reminded that defending the country over the past 209 years has been steady business—steady work—and will continue to be in the years ahead,” he said.

“I have a very good man replacing me. So, I put the flag out in front of Quarters Six and, as I put it in the bracket, I thought that in addition to all the JCS problems and all the undone work I was leaving [Navy Adm.] Bill Crowe, I leave him that very good, 20-buck bronze eagle that I bought for the end of that flag pole.”

During the retirement ceremony, Reagan said one of the general’s greatest accomplishments was not in his military personnel files. “Jack Vessey always remembered the soldiers in the ranks; he understood those soldiers are the backbone of any army,” Reagan said. “He noticed them, spoke to them, looked out for them. Jack Vessey never forgot what it was like to be an enlisted man, to be just a GI.”

“I had the privilege of meeting him for the first time in 1996. He never forgot, even as chairman of the Joint Chiefs of Staff, that the individual soldier was the most important person in the Army,” Ham said.

Born in 1922, Gen. Vessey enlisted in the Minnesota National Guard while he was still in high school. He served in World War II as first sergeant of a field artillery battery in the North African and early Italian campaigns. He was commissioned a second lieutenant of field artillery at the Anzio beachhead and continued with the 34th Division until the end of the war in Italy.

After the war, most of Vessey’s service continued to be in field artillery assignments. In the 1950s, he served with the 4th Infantry Division in Germany and the Eighth U.S. Army in the Republic of Korea. During this period, he also attended the Command and General Staff College at Fort Leavenworth, Kan. In Vietnam, he served as executive officer of the 25th Infantry Division Artillery. In March 1967, while acting as commander of the 2nd Battalion, 77th Artillery, he received the Distinguished Service Cross and the battalion received the Presidential Unit Citation for actions during Operation Junction City.

From Vietnam, he went to Germany to serve as commander of the 3rd Armored Division Artillery from October 1967 until March 1969, and then as division chief of staff for a year. He went back to Southeast Asia in December 1970 to head the U.S. Army Support Command, Thailand. In January 1972, he went into Laos to coordinate all U.S. military operations in support of the war in Laos.

From July 1979 until June 1982, he served as vice chief of staff of the Army. After his 1985 retirement, he served three presidents: Reagan, George H.W. Bush and William J. Clinton, as a special emissary to Vietnam working to resolve the fate of missing U.S. service members from the Vietnam War.