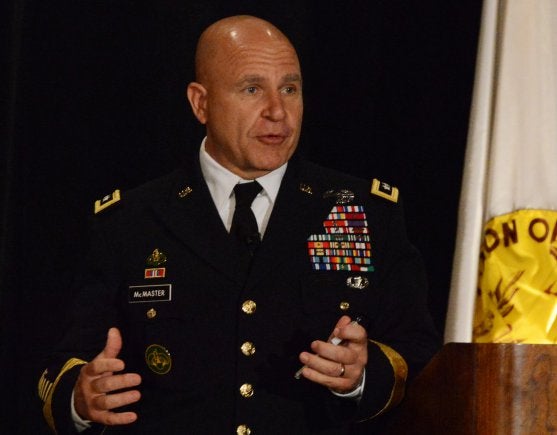 A Senate Armed Services Airland Subcommittee hearing on Army modernization took a hard turn into the issue of personnel cuts amid growing global threats when Lt. Gen. Herbert R. McMaster Jr. said plans to cut total Army end strength represent high risk—and quite possibly “unacceptable” risk.“It’s unacceptable risk because of a combination of factors,” said McMaster, director of the Army Capabilities Integration Center and deputy commanding general, futures, of the U.S. Army Training and Doctrine Command. “We all recognize that the threats to national and international security are increasing. Many of those threats are interconnected.”Those threats include “revisionist powers” Russia and China as well as North Korea and Iran, on top of the ongoing “transnational terrorist” threat, McMaster said. “As we look at the way threats to our national security are evolving, when we look at what’s required to deal with those threats, it is a joint force … that places a very high demand on ready land forces.”He noted that current end strength plans would shrink the Regular Army to its smallest size since before World War II, at a time when the service has not been heavily modernizing weaponry and equipment. Previous drawdowns, such as after the Vietnam War and the Cold War, occurred after the Army had been “considerably” modernized, he said, and “we are not recently modernized.”Sen. Dan Sullivan, R-Alaska, said the increased global threat is “a common theme that we’ve heard in the last year,” adding that “there are a number of” lawmakers in both parties who believe “450,000 for the active-duty force is unacceptable risk.”Sen. Tom Cotton, R-Ark., the subcommittee chairman, said lawmakers have discussed a larger active-duty Army—perhaps 480,000 to 490,000 soldiers—but “what would be the implications if Congress took that step but did not increase funding?”“The Army will never give up the readiness of its formations,” said Lt. Gen. Joseph Anderson, Army deputy chief of staff G-3/5/7 operations and plans. “So if you increase the number of soldiers” without an increase in the budget, modernization will take another hit. We can’t stretch out things more than we already have. It would make the problem we have right now even worse.”