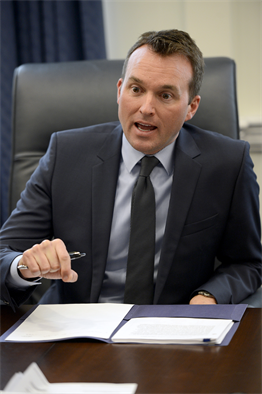 Eric K. Fanning, the acting undersecretary of the Army, will be nominated to succeed Army Secretary John McHugh, the White House announced Friday.Fanning has served in a variety of senior Pentagon jobs during the Obama administration 2009. First, he was a deputy undersecretary of the Navy. Then, he was undersecretary of the Air Force and the acting Air Force secretary. He later served first as special assistant and then as chief of staff to Secretary of Defense Ash Carter, and has been the Army’s acting-undersecretary since June.McHugh has announced his hope of resigning by Nov. 1, although there are indications he might stay on the job until his successor is confirmed.Fanning also has served as a staff member of the House Armed Services Committee, a senior vice president with Business Executives for National Security, was a special assistant in the Defense Department in the mid-1990s and an associate director for political affairs at the White House in 1996.For all of his experience, Fanning is likely to get a lot of attention over the fact he would be the first openly gay person to serve as Army secretary.The White House announcement of the intention to nominate Fanning for the job is not a surprise, as Fanning has been a close associate of Carter. The formal nomination process won’t begin until his nomination is submitted to the Senate. What happens in the Senate is not clear, as Sen. John McCain, R-Ariz., the Senate Armed Services Committee chairman who would schedule a hearing and vote on the nomination, has told reporters he intends to freeze civilian nominations for Defense Department jobs until a deal is struck with the White House over the 2016 defense policy bill, which faces a veto threat.