Carter Pledges to Focus on Soldiers and Families

Carter Pledges to Focus on Soldiers and Families 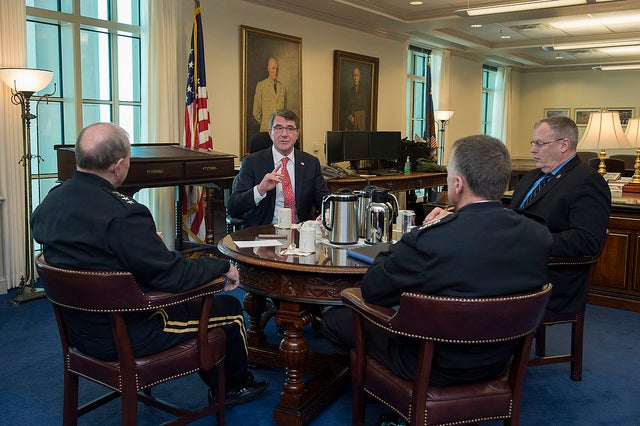 Defense Secretary Ashton Carter pledged Tuesday to focus on soldiers and their families in what he forsees as continuingly uncertain times.In a message to military and civilian personnel, issued shortly after he was sworn in as the nation’s 25th defense secretary, Carter pledged to focus “on the well-being, safety, and dignity of each of you and your families.”“I will ensure your training and equipment are as superb as you are,” Carter wrote. “And I pledge to make decisions about sending you into harm's way with the greatest reflection and utmost care because this is my highest responsibility as secretary of defense.”Carter said he will need the help of military personnel to succeed. “We confront a turbulent and dangerous world: continuing turmoil in the Middle East and North Africa, and the malignant and savage terrorism emanating from it; an ongoing conflict in Afghanistan; a reversion to archaic security thinking in parts of Europe; tensions in the Asia-Pacific; the proliferation of weapons of mass destruction; and intensifying threats in cyberspace,” Carter wrote. “In addressing these challenges, I have pledged to provide the president my most candid strategic advice. I will count on your experience and expertise as I formulate that advice. I will also ensure the president receives candid professional military advice."Carter has worked in the Pentagon off and on for more than 30 years, serving under 11 defense secretaries from both major political parties. This gives him a deeper view of defense issues that some of his predecessors. Carter said he believes the U.S. “remains the strongest and most resilient nation on earth,” and he credits military and civilian workers for making this possible.“Because of you, we have the finest fighting force the world has ever known. We have friends and allies in every corner of the world, while our adversaries have few. We have long possessed the world's most dynamic and innovative economy. And our values, principles, and leadership continue to inspire hope and progress around the world,” he wrote.