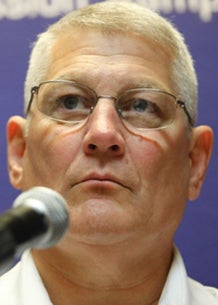 The chairman of the National Commission on the Future of the Army warns the potential return of sequestration in fiscal year 2018 would be a dangerous blow to Army efforts to improve readiness and carry out missions.Sequestration, which was suspended for two years by the November 2015 passage of Bipartisan Budget Agreement, returns as a threat if Congress and the White House cannot reach accord on spending priorities. If that happens, the number of Regular Army soldiers could fall as much as 30,000 troops below the 450,000 active-duty members the commission holds as the absolutely minimum required to carry out national security commitments.“It was our assessment that the Regular Army force of 420,000 would be inadequate to meet the nation's requirements at acceptable levels of risk,” said the commission chairman, retired Gen. Carter Ham, at a hearing of the Senate Armed Services Committee.Uncertainty surrounding Army budget levels over the next few years is manifesting in a variety of ground-level readiness issues. For example, retired Army Gen. James D. Thurman, former commander of U.S. Forces Korea and a commission member, said the Army must sustain regular rotations through its Combat Training Center in order to properly prepare to conduct “decisive land combat.” The current lack of predictable budgeting is degrading the Army’s ability to do that, Thurman said.“There were cases over the past few years where rotations were canceled,” Thurman said. “That is not a good ideal, particularly when we've got formations that have to be trained for land combat.”The commissioners’ warnings found sympathetic ears among members of the Armed Services Committee. “Our Army is confronting growing threats and increasing operational demands with shrinking and less ready forces and aging equipment,” said Sen. John McCain, R-Ariz., the committee chairman.McCain noted that only a little more than one-third of the Army's brigade combat teams are fully ready for deployment, and many “key enabling forces” such as artillery, armed cavalry, engineers, air defense, chemical, biological, radiological and nuclear response, and theater transport “have been reduced to levels that compromise the Army's ability to field campaign-quality forces.”“The Army has no plan to return to full-spectrum readiness until 2021, at the very earliest,” McCain said. “Put simply, our ground force is not in balance. We're not sized with the adequate capacity or with key capabilities to give our soldiers what they need to win decisively. We can and must do better.”