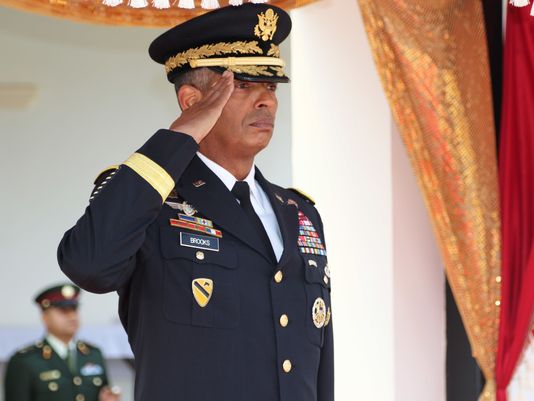 The increasing unpredictability of North Korean leader Kim Jong Un and his continuing pursuit of nuclear missile capabilities are reasons to pursue deployment of the U.S. Army’s premier anti-ballistic missile system in South Korea, said Gen. Vincent K. Brooks, commanding general of U.S. Army Pacific, during his April 19 confirmation hearing to become the next commander of U.S. Forces Korea.Brooks told the Senate Armed Services Committee that deploying the layered, integrated Terminal High Altitude Area Defense, or THAAD, system would “thicken the defensive structure” of South Korea against a “particular set of threats that are emerging” in the North’s missile program.North Korea is “moving in the wrong direction,” Brooks said. “The changes that we've seen are all provocative and dangerous. We need to take Kim Jong Un’s actions with a great degree of seriousness. I am not optimistic about the way North Korea is going.”North Korea conducted its fourth nuclear missile test earlier this year; South Korean officials say they have seen indications that a fifth may be in the works. In March, the U.N. Security Council approved stiff sanctions against North Korea in response to a nuclear test in January and a long-range rocket launch in February. However, the Kim regime has showed no signs of slowing its nuclear program. Equally worrisome, Brooks said, is Kim’s execution of dozens of officials in his regime over the past few years.“The approach that Kim Jong Un is taking toward his military leadership is a cause for concern,” Brooks said. “The potential of having anyone who can counterbalance him or provide advice … is going down. It's not evident that he’s able to receive advice.”Even China, North Korea’s longtime regional ally, is growing uneasy about the situation, said Brooks, adding that the Chinese are “frustrated. That’s what has been communicated to me.”Still, officials in Beijing have reservations about the U.S. deployment of a THAAD system in the region, Brooks said. “We’re trying to reassure them that this is not an issue for China.”