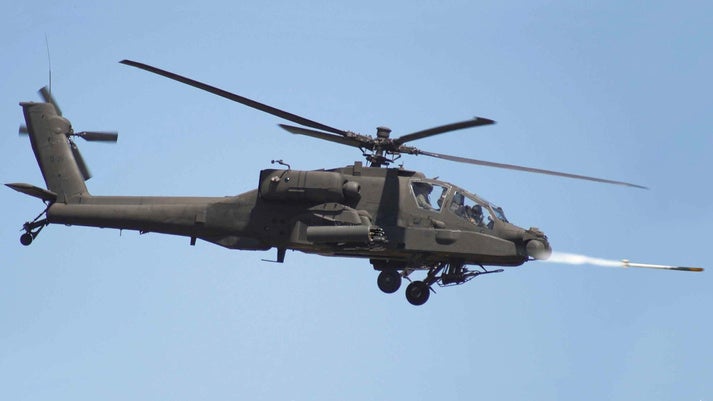 The Army is getting considerably more bang for the buck—both financially and operationally—from guided rockets mounted on attack helicopters, officials have told Congress.“Guided rockets have recently really proven to be very effective,” Maj. Gen. Michael D. Lundy, commander of the U.S. Army Aviation Center of Excellence and Fort Rucker, Ala., said at a recent hearing of the House Armed Services Committee. “We are modifying our lethality strategy to bring in more guided rocket capability.”Lundy noted that guided rockets are less expensive than some unguided varieties in the Army inventory and are “appropriate” for certain targets. “We get a better cost curve, I guess you would say, and it allows us to service different kinds of targets. Guided rockets are definitely a part of our strategy,” he said.One variety of guided rocket high on the Army’s priority list is the Advanced Precision Kill Weapons System. In October, contractor BAE Systems announced the Army was acquiring an initial supply of these rockets for deployment in two AH-64 Apache battalions.The system features a 2.75-inch rocket that uses semiactive laser guidance technology with a “plug and play” design enabling it to be highly tailorable and scalable for future needs, BAE said in a statement. It also allows for streamlined deployment on a variety of platforms using existing equipment and infrastructure. According to BAE, the rocket already has been qualified or demonstrated on more than a dozen rotary and fixed-wing platforms.Lundy said the precision capabilities afforded by guided rockets are particularly useful in crowded urban environments such as in the Iraq and Afghanistan theaters.“When we have tight rules of engagement … guided rockets are definitely what we want to use,” he said. “A guided rocket has less collateral damage, potentially, than some of our missiles, some of our larger weapons. They have less blast and are more accurate. Those are certainly the kind of munitions that we want to use in and around urban areas or areas where we are concerned about collateral damage.”In addition to moving toward guided rockets, the Army also is working to increase the lethality of rocket warheads to improve performance against certain reinforced targets such as bunkers, Lundy said.