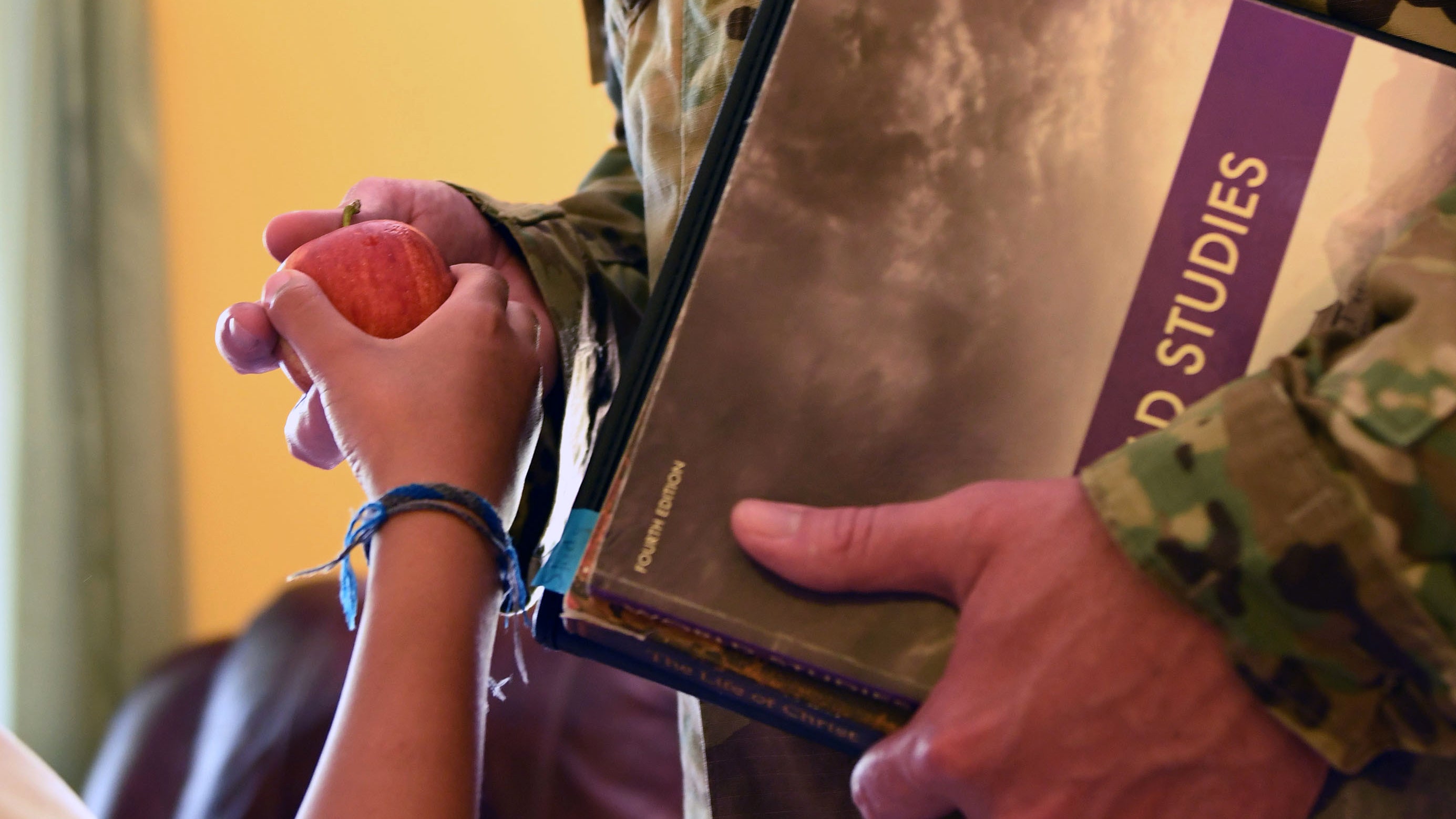 The Association of the U.S. Army is announcing the award of its national scholarships for 2020 valued at more than $270,000.

Scholarships are being awarded to 47 AUSA members.

Two full-ride scholarships are awarded for Trident University, an accredited online institution offering bachelor’s and master’s degrees that gives credit for leadership and professional experience. Each scholarship is valued at $48,000.

A Trident University scholarship is awarded to Master Sgt. Tyson Mayfield, a 10-year security forces airman in the Utah Air National Guard who is working on a master’s degree. The degree would help him be “better prepared to serve my subordinates and superiors,” Mayfield said, and set an example for his four daughters on the importance of education.

A Trident University scholarship is awarded to Warrant Officer Jason Memmo, an information systems technician in the Pennsylvania Army National Guard who aspires to earn a doctorate and become a researcher in the field of information systems and business. In addition to building his knowledge, “I am in a position to teach my fellow soldiers and guide my command,” he said, adding that the degree would “put me on track to be able to do my current and future jobs better.”

Eight SMA Leon Van Autreve Scholarships are awarded in honor of the former sergeant major of the Army who died in 2002.

A $25,000 Van Autreve scholarship is awarded to 2nd Lt. Inga Mauzy, who aspires to become a veterinarian in the Army and has volunteered more than 600 hours working with animals while going to school and participating in ROTC. “It is hard to put into words how much I love working with animals,” she said.

A $10,000 Van Autreve scholarship is awarded to Craig Birckhead-Morton, a military family member who is attending Yale University with the goal of pursuing a career in political science, global affairs and economics. “As we live in an interconnected global world, politics are not just local,” he wrote in his application. Gaining an education will help him “be a change agent to change the local community at possibly the national level,” he said.

A $5,000 Van Autreve scholarship is awarded to 1st Lt. Mahdi Al-Husseini, an Army aviator who is pursuing a master’s in electrical engineering at Columbia University. In addition to being a finalist in the third round of the Army’s xTechSearch competition, Al-Husseini plans to eventually earn a doctorate and pursue a professorship at the U.S. Military Academy at West Point, New York. “Throughout my career, I hope to continue solving challenging problems by inventing operationally viable electromechanical equipment,” he said.

Five Van Autreve scholarships of $2,000 each also are awarded. The recipients are Ryan Dukes, a military family member who is preparing to attend college and pursue a career as an engineer; Capt. Carolynn Grigsby, a West Point graduate who is transitioning out of the Army and plans to pursue a master’s in computer science while working full-time to support her family; Abdiel Hernandez-Lopez, an Army family member who is pursuing a career in aerospace engineering and hopes to one day be an astronaut; Chief Warrant Officer 4 Marc Losito, who is working to earn a master’s in public policy from Duke University; and Capt. Isaac Melnick, an Army Reserve engineer officer who is pursuing a master’s in business administration.

Two Joseph P. and Helen T. Cribbins Scholarships of $10,000 each are awarded to students completing degrees in science, technology, engineering and math. The Cribbinses were longtime supporters of AUSA and the Army.

The recipients are Jeremy Gries, the son of two soldiers who is studying exercise science so he can pursue a career in sports medicine, and Ashley Pearson, who also is from a family where both parents served in the Army and aspires to be a military doctor.

Six Nicholas D. Chabraja Scholarships of $5,000 each are also awarded for science, technology, engineering and math, named for a former AUSA Council of Trustees chairman.

The recipients are Victoria Chevallier, an Army family member who plans to study computer science at the University of Texas at Austin; Cutter Clayton-Delgado, an Army family member and recent high school graduate who is studying civil engineering at North Carolina State University; Emily Graham, a military family member who is completing a degree in mathematics at Clemson University and aspires to be an actuary; Levi Jackson, a military spouse who is working to become a veterinarian in the Army; David McDonough, whose father and two brothers served or continue to serve in the Army and who is working to become a high school chemistry teacher; and Elana Trejo, a Navy veteran who is pursuing a career in physical therapy so she can help her fellow veterans.

Two Gen. Jack N. Merritt Scholarships, each $5,000, are awarded in the name of the former AUSA president.

Jacob Duffer, the son of an FBI special agent who plans to pursue a degree at Baylor University in preparation to run a local church, and Donna Reynolds, who grew up in an Army family and aspires to be a foreign service officer with the State Department, are the 2020 recipients.

Nine Completed Coursework scholarships, each worth $2,500, are awarded to help with debt from recent completion of college courses or professional certifications.

Recipients include Chief Warrant Officer 3 Mark Bowling, a construction engineering technician in the Army Reserve who is working to advance his civilian education and advance in his career field; Ashlyn Dorn, whose father is a 26-year Army veteran and who is completing a master’s degree in homeland security and counterterrorism with the goal of serving in the State Department; former Maj. Nicholas Eidemiller, who is completing a master’s in business administration at the University of Pennsylvania; and Dana Carraway of South Carolina.

The remaining recipients are Sgt. 1st Class Thomas Hewett, who plans to retire from the Army in 2021 and pursue a doctorate so he can continue working as a health care administrator; Capt. Samuel Oquendo-Marrero, who is pursuing a doctorate of management in organizational leadership at the University of Phoenix; Craig Sager, an ROTC cadet at Rutgers University who is studying aerospace engineering; Karolyn Smith, an Army veteran who is pursuing a doctorate of management with a concentration in homeland security; and Madison Thompson, who comes from an Army family and is studying to become a doctor.

This year, for the first time, AUSA recognized two students as part of its Lt. Gen. Theodore G. Stroup Jr. Achievement Award. The program honors Stroup, a former vice president of education at AUSA, and recognizes JROTC cadets for their achievements.

Prescott Farris of Fairfax, Virginia, is this year’s winner, receiving a $1,000 award. Fernando Avila of Waldorf, Maryland, will receive a $500 award.

AUSA also is awarding scholarships of $4,000 each to three cadets as part of the Army’s ROTC Civilian Sponsored Scholarship Program, which is overseen by Army Cadet Command.

Recipients are Troy Smith of Virginia Military Institute, Elizabeth Holan of Iowa State University, and Matthew Bleckley of the University of Tampa.

Staff Sgt. Alan Brutus is the recipient of this year’s SGM Dawn Kilpatrick Memorial AUSA Scholarship, named in honor of the NCO who died after a two-year battle with cancer. The $4,000 award is for mid-level and senior NCOs in public affairs career fields.

Strickland, a 30-year soldier, was the sergeant major to the deputy Army chief of staff for personnel when he was killed in the Sept. 11, 2001, attack on the Pentagon.

The scholarships in his name are awarded annually to two NCOs, who each receive $4,000 to help cover education costs not covered by tuition assistance.