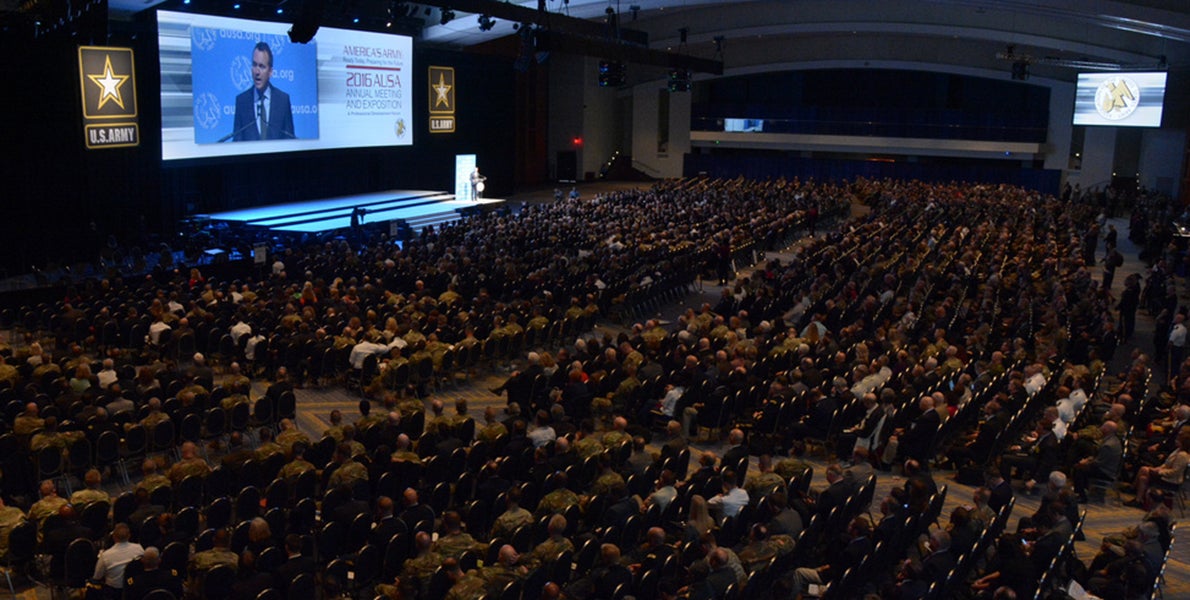 The Association of the U.S. Army has announced its national awards for 2017. The awards and medals will be presented during the association’s Annual Meeting and Exposition, to be held Oct. 9–11 in Washington, D.C.

The association previously announced that its highest annual award, the George Catlett Marshall Medal for selfless service to the United States, is being presented on Oct. 11 to actor and humanitarian Gary Sinise.

Here are the additional AUSA awards:

The General Creighton W. Abrams Medal for exceptional service to the U.S. Army is awarded to Gen. Eric K. Shinseki, USA Ret., the 34th Army Chief of Staff and the seventh person to serve as Secretary of Veterans Affairs.

A 1965 graduate of the U.S. Military Academy, the Hawaii native served two combat tours in Vietnam, served in Bosnia as part of the NATO Stabilization Force, and served more than 10 years in Europe including as commanding general of the 7th Army and commander of Allied Land Forces Central Europe. He was the first Asian-American to reach four-star rank.

Shinseki served as Army Vice Chief of Staff from 1998 to 1999, was Army Chief of Staff in 2001 during the terrorist attacks on the U.S, and led the Army during Operation Enduring Freedom in Afghanistan and Operation Iraqi Freedom while at the same time moving to transform the Army to meet modern technological challenges.

After retirement, he served on several corporation boards before being asked by then-President-elect Barack Obama to head the Department of Veterans Affairs. He was unanimously confirmed for the post by the U.S. Senate, and sworn in on Jan. 20, 2009, the same day President Obama took the oath of office. He stepped down in 2014.

The Major General Anthony J. Drexel Biddle Medal for outstanding contributions to the Association of the U.S. Army is awarded to Catherine C. “Kit” Roache.

The Vice President of Programs for AUSA’s Monmouth, N.J., chapter, she has had a 35-year defense industry career and a long association with community and professional organizations, including organizing an annual Support Our Heroes gala and The Gingerbread Ball, an event she has chaired that involves several other nonprofit organizations in addition to AUSA. She is credited, combining all her efforts, with raising more than $2 million for the Fisher House Foundation, which provides housing for military and veterans’ families when a loved one is hospitalized.

Roache is co-owner and partner of Two Rivers Concierge Services, a firm helping with home organization and event planning, and is involved in other fundraising events. She is writing her first book.

Hunter is a member of the George Washington Chapter of AUSA, where he served as president for four years, and is employed by the Army Installation Management Command. He is an AUSA Life Member. In his off-time, he volunteers as a mentor, advocate and guide for soldiers, families and veterans, and is especially involved with wounded warriors. For 10 years, he has served as the official guide to Washington landmarks for soldiers and their families attending AUSA’s Annual Meeting and Exposition, organizes an annual holiday party for more than 200 soldiers and their families, has run in and helped coordinate the Army Ten-Miler, and organizes an annual golf tournament that over 10 years has raised more than $700,000 for scholarships, awards and activities.

The John W. Dixon Award for outstanding contributions to national defense from industry goes to Dennis A. Muilenburg, the chairman, president and CEO of The Boeing Company.

Every service member has benefited in some way from the leadership and commitment of Muilenburg, who has been part of Boeing since 1985 and its chief executive since 2015. Boeing’s AH-64 Apache and CH-47 Chinook helicopters are widely used in all environments, and under Muilenburg’s leadership the company is heavily invested in developing future vertical lift programs. Boeing is a leader in unmanned systems, missile and missile defense systems, command and control systems, and active armor protection.

Muilenburg has been a driving force in improving logistics and support service and an initiative to repurpose existing systems to improve range and lethality, and has been instrumental in establishing and advancing leadership development programs. This has included hosting events for senior Army two-star generals at Boeing headquarters in Chicago and hosting a forum for one-star generals to provide insights on industry challenges.

Boeing has developed an enduring partnership with the U.S. Military Academy and the other service academies focused on ethics, leadership development, minority outreach, and on science, technology, engineering and math, with Muilenburg personally engaged in annual conferences and meetings with students, faculty and academy superintendents.

The accomplishments came as he applied 47 years of military service to strengthening and solidifying the standing of the National Guard as a vital operational force within the Department of Defense.

The Major General James Early Rudder Medal given to a current or former member of the U.S. Army Reserve for advancing a seamless and component-integrated Army is awarded to retired Maj. Gen. Marcia C. Anderson.

Her last assignment in a 36-year military career was as deputy chief of the Army Reserve where she represented Reserve interests in meetings with senior Defense Department officials and served on the Reserve Forces Policy Board. In a previous assignment as deputy commander of the Army Human Resources Command, part of her focus was on better integrating the Regular Army, Army National Guard and Army Reserve.

Her 2011 promotion to major general made her the first federally recognized Army two-star African-American woman.

The Joseph P. Cribbins Medal for exemplary service by a Department of the Army civilian is awarded to Margaret A. Tyree.

A resource management analyst at White Sands Missile Range, N.M., a Life Member of AUSA and a former president of AUSA’s White Sands Missile Range Chapter, her professional Army career began as an optics mission planning engineer just after she graduated from New Mexico State University in 1987, specializing in test and evaluation of programs and helping in program transitions, such as the switch from film to digital image tracking and recording.

She transitioned herself from a planning engineer, to a section chief and quality assurance officer, to missile flight safety officer and deputy director for range operations based on her business and program analysis skills. She helped with development of a human capital management plan by conducting a workforce study of hiring, performance and rates, and was selected to be part of an Army Proponency Career Program at the Army Materiel Command where she was also a consultant rewiring guide for career opportunity for engineers and scientists and also part of a team looking at future technology solutions.

Volunteer Family of the Year

The Volunteer Family of the Year Award for promoting the well-being of soldiers and their family members is presented to the family of Army Sgt. 1st Class Eryn and Anja Seidl of Kaiserlautern, Germany.

For the Seidls, their children Marco, Annabella and Zachary, and grandmother Thekla Oelschlegel, volunteerism has been a family affair for several years and they have helped to plan and execute unit and community events. Be it a family day for a unit with 150 people to a community festival for 3,000, such as the pre-Halloween Trunk-or-Treat festival, the Seidls have proven to be reliable, organized and enthusiastic supporters for multiple organizations and a variety of programs. Planning, logistics, decoration, cooking and other support are provided by this cohesive family team, recognized within their community as the top volunteers supporting activities and programs for service members, Defense Department civilians, military families and the entire community.

The Association of the U.S. Army’s National Service Award goes to Patriot Guard Riders, a nonprofit group of motorcyclists who ensure dignity and respect at memorial services.

Created in Kansas in 2005 in reaction to protests at military funerals, the group made their first organized appearance that Oct. 11 in Chelsea, Okla., at the funeral of Army Staff Sgt. John G. Doles, who was killed in Afghanistan by enemy fire. About 70 members of what was then called the American Legion Riders revved their motorcycle engines for about 30 minutes to drown out the sound of protestors. They changed their name to Patriot Guard Riders to be more inclusive, and appeared again on Oct. 27 at the funeral in Tonganoxie, Kan., of Army Spc. Lucas A. Franz, who died by enemy fire in Iraq, this time with 100 riders as their movement grew and gained national attention.

They refined their mission, recruited state captains and began an organized counter-movement to funeral protests that now has completed more than 30,000 of what they call missions of respect.

Riders have two things in common: motorcycles and unwavering respect for fallen service members, first responders and honorably discharged veterans. Their missions have two objectives: showing respect for the deceased, their family and the community; and shielding the family and other mourners from any protests. They do this by legal and non-violent means but with the occasional roar of engines, just as they did on their first ride.