Staff Sgt. Travis W. Atkins was posthumously awarded the Medal of Honor for saving the lives of his fellow soldiers in Iraq more than a decade ago, by shielding them from an insurgent wearing a suicide vest.

In a White House ceremony on March 27, President Donald Trump presented the Medal of Honor to Atkins’ son, Trevor Oliver, who was 11 when his father was killed in 2007.

“We can never measure the true depth of our gratitude nor the full magnitude of your loss, but we can pay everlasting tribute to Staff Sgt. Travis Atkins’ truly immortal act of valor,” Trump told Oliver, Atkins’ parents, Elaine and Jack Atkins, and other family members.

Before receiving the award, Oliver spoke of his father and thanked everyone for “everything you’ve said to me over the last few days,” and recalled his father telling him “the funniest stories” about his Army buddies.

“The medal is something that I take a lot of pride in, but it’s the words that are the real prize,” Oliver said. “I feel so close to you and to him with every story I hear.” 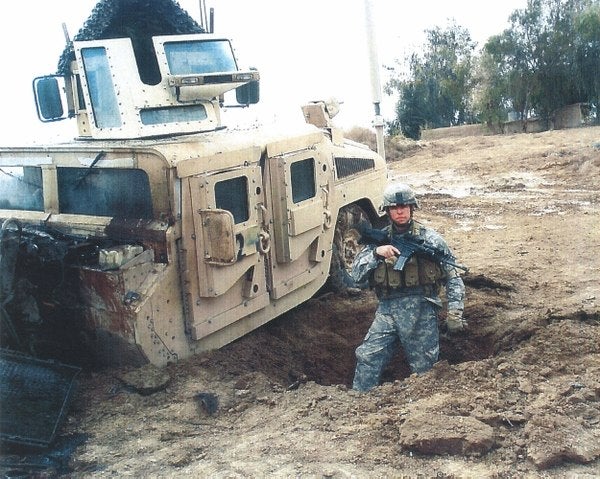 During a mid-morning route security mission that day in the town of Abu Samak outside of Baghdad, Atkins detained and began to search a group of suspected insurgents. One of the men resisted, and Atkins and the insurgent were soon engaged in hand-to-hand combat.

As Atkins was trying to subdue the man, he realized the man was working to detonate a bomb that was strapped to his body under his clothing. Moving into a bear hug position from behind, Atkins body-slammed the man to the ground and, using his own body to shield his fellow soldiers from the explosion, absorbed the blast at the cost of his own life.

“Today the name of Staff Sgt. Travis Atkins will be etched alongside the names of America’s bravest warriors and written forever into America’s heart,” Trump said, adding that “in his final moments on earth, Travis did not run. He did not hesitate, he rose to the highest calling, he laid down his life to save the lives of his fellow warriors.”