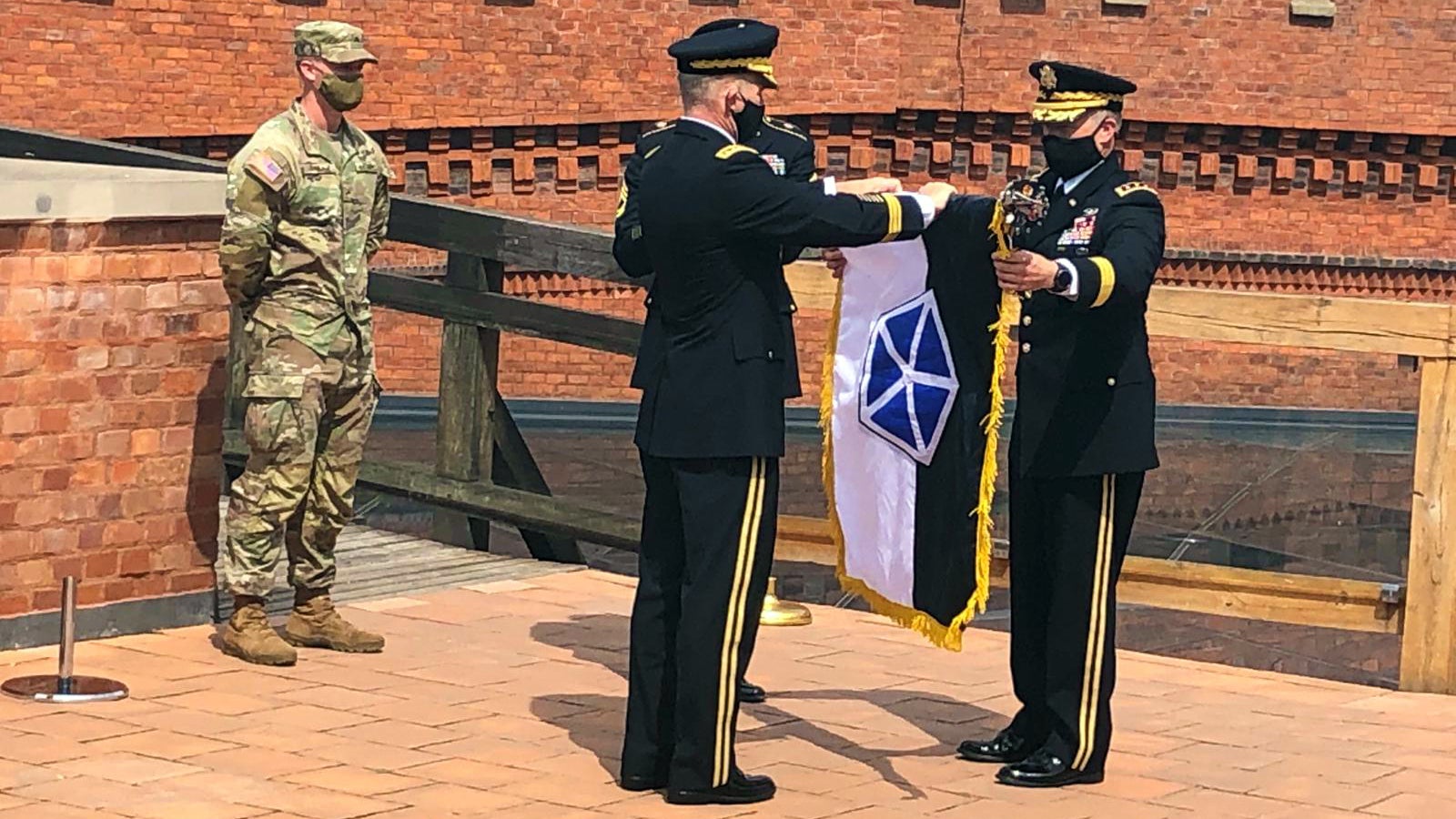 The V Corps flag was unfurled Aug. 4 in Poland in a ceremony marking the establishment of the corps’ forward command post and the promotion of incoming corps commander Lt. Gen. John Kolasheski.

Deactivated in 2013 in Wiesbaden, Germany, the storied V Corps will be based at Fort Knox, Kentucky, but have a forward-deployed command element in Poland as part of a shift in U.S. presence in Europe. The first rotation of 200 U.S. soldiers is expected to arrive in fiscal 2021.

Army Chief of Staff Gen. James McConville was in Poland on Aug. 4 to preside over the ceremonies.

“The activation of an additional corps headquarters provides the needed level of command and control focused on synchronizing U.S. Army, allied and partner nation tactical formations operating in Europe,” McConville said in a statement. “It will enhance U.S. Army Europe and U.S. European Command as they work alongside allies and partners to promote regional stability and security.”

The Army announced in February its plans to reactivate V Corps and identified Europe as the location for a forward command post. Placement of the forward element in Poland was finalized by the Enhanced Defense Cooperation Agreement, announced July 31, between the U.S. and Poland.

The agreement enables an “increased enduring U.S. rotational presence of about 1,000 personnel,” to Poland, Defense Secretary Mark Esper said in a statement Aug. 3. The increase, in addition to the 4,500 U.S. troops already on rotation in Poland, could include a division headquarters, intelligence, surveillance and reconnaissance capabilities, and the infrastructure to support an armored brigade combat team and combat aviation brigade.

The agreement also comes as the Pentagon moves to reduce the number of U.S. troops stationed in Germany to 24,000. The plan, announced July 29, includes bringing the 2nd Cavalry Regiment and its 4,500 soldiers back to the U.S. from Vilseck, Germany, and rotating U.S.-based Stryker BCTs into Europe.

In all, about 11,900 service members will be repositioned, with 6,400 troops returning to the U.S. and nearly 5,600 moving to other parts of Europe, Esper said.

“We’re moving forces out of Central Europe, Germany, where they’ve been since the Cold War, and we’re now moving, we’re following, in many ways, the boundary east, where our newest allies are,” Esper said.

When the V Corps forward element deploys to Poland in the future, its primary mission will be to conduct operational planning, mission command and oversight of rotational forces in Europe. The headquarters also is slated to participate in the Defender-Europe 2021 exercise.

Most recently, V Corps had its headquarters in Germany. It was inactivated in 2013 as part of a larger restructuring of Army forces in Europe.

This latest iteration of the corps at Fort Knox will have about 635 soldiers and be led by Kolasheski, who most recently commanded the 1st Infantry Division at Fort Riley, Kansas, and previously was deputy chief of staff for operations at Army Forces Command.

The activation of V Corps gives the Army four corps headquarters. The others are I Corps at Joint Base Lewis-McChord, Washington, III Corps at Fort Hood, Texas, and XVIII Airborne Corps at Fort Bragg, North Carolina.