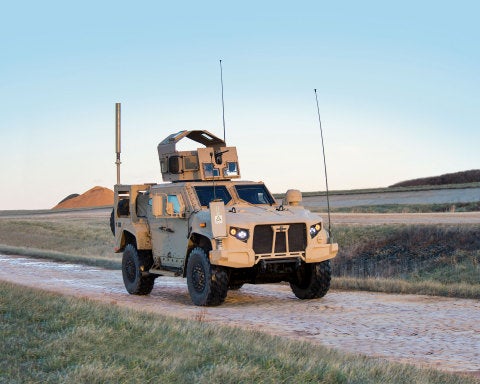 The Army has taken another big step forward on one of its top modernization priorities with a $243 million order for 657 Joint Light Tactical Vehicles.The proposed fiscal year 2017 budget calls for an additional 1,828 of the vehicles to be purchased next year as part of an eight-year program that would deliver about 17,000 JLTVs to the Army and Marine Corps.Oshkosh Defense won the contract in a competition that included two other top defense contractors, AM General and Lockheed, in a deal that could end up being worth $30 billion. The Army expects over time to acquire more than 49,000 JLTVs, with the Marine Corps purchasing about 5,500.The JLTV, billed as the “centerpiece” of the Army’s tactical wheeled vehicle modernization strategy, provides unprecedented protection and off-road mobility, as well as transportability via air, land and sea. It will replace a large portion of the Army’s Humvees.The current program contract calls for Oshkosh to deliver a total of nearly 17,000 vehicles, as well as kits and services, over an eight-year period. Delivery of the first vehicle is due this October. The vehicles, trailers and installed kits for the newly announced order will be delivered by the first quarter of fiscal year 2018.According to Oshkosh, the JLTV is a family of vehicles designed to provide protected, sustained, networked mobility for troops and payloads across the full range of military operations. It is being produced in four configurations: general purpose, heavy-guns carrier, close-combat-weapons carrier, and utility vehicle.Read more about the latest generation of Joint Light Tactical Vehicles in the February 2016 issue of ARMY magazine.