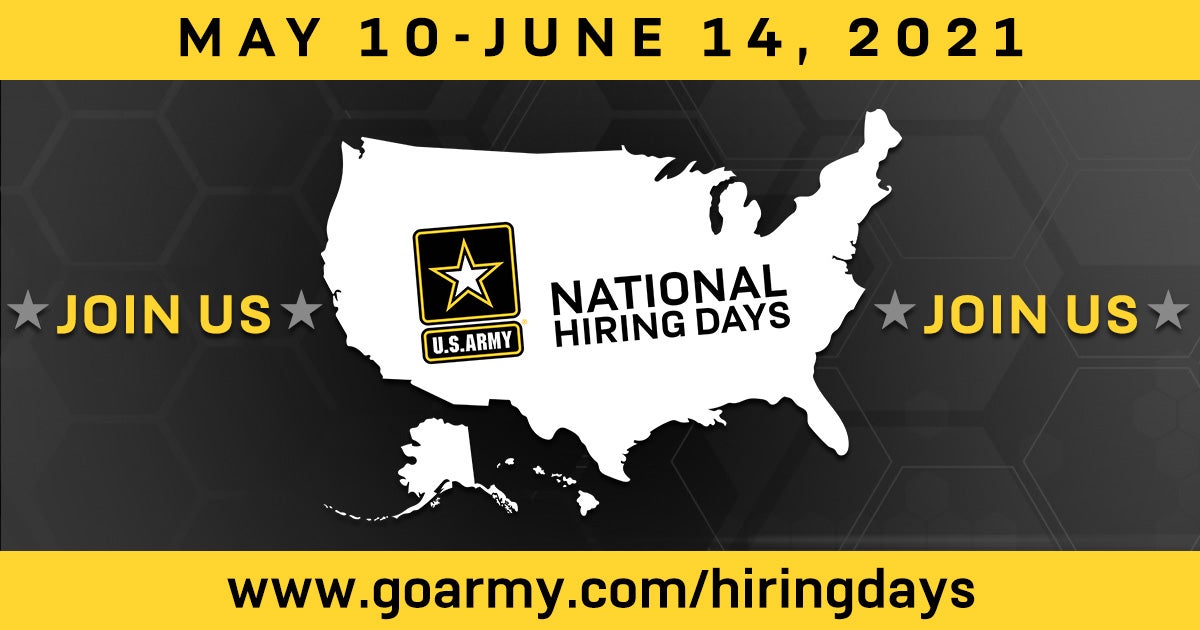 Encouraged by the success of more than a year of virtual recruiting, the Army will hold its second nationwide virtual career fair in a bid to recruit young people who can bring needed skills to the force.

In a departure from the first nationwide event, which took place last year over three days, this year’s Army National Hiring Days has been expanded to five weeks, from May 10 through June 14, concluding on the Army’s 246th birthday.

The longer event “allows [time] for the rest of the Army to get involved at a much deeper level,” said Gen. Paul Funk, commander of the Army Training and Doctrine Command, during a May 5 phone call with reporters.

As with the 2020 campaign, this year’s effort will focus, in part, on the incentives that come with being a soldier, such as 30 days of paid leave, tuition for college, world travel and technical skills training.

The fair will also showcase 11 priority MOSs that include signing bonuses worth up to $40,000, such as infantry, Special Forces, human intelligence collector, psychological operations specialist and parachute rigger.

The expectation is that the five-week virtual career fair will result in double the number of credible leads garnered during last year’s event, which helped the Army meet its end strength goal of 485,000.

“We blew ourselves away last year by generating 30,000 leads in this very small period of time, and we were overwhelmed,” said Brig. Gen. Patrick Michaelis, deputy commanding general of Army Recruiting Command. “Our goal this year is to get about 60,000 leads. My internal goal is much higher than that based on the time we have available.”

Between year-round recruiting efforts and the upcoming Army National Hiring Days, Michaelis said, the Army is on track to meet its fiscal 2021 end strength goal of 486,000 active Army soldiers, plus the number of contracts needed to begin fiscal 2022 with new recruits ready to begin basic and advanced individual training.

Before the COVID-19 pandemic set in last spring, Army recruiters had been using some social media platforms to augment their in-person contacts. But the Army fell behind by 4,000 contracts when the public health emergency shut down recruiting stations and access to high schools across the country.

Within a month, recruiting had gone completely virtual, prompting the first Army National Hiring Days and several smaller career fairs through the fall and spring.

This year, a limited number of in-person recruiting events associated with Army National Hiring Days will take place where it can be done safely, and recruiters will be boosted by the May 5 launch of a new YouTube recruiting campaign, “The Calling,” a series of short, animated videos that make up the third phase of the “What’s Your Warrior?” campaign first launched in November 2019.