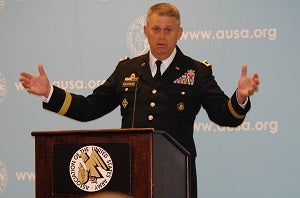 The Army’s top installation officer continued the Army’s call for Base Realignment and Closure (BRAC) to optimize resources and get rid of excess infrastructure. “We are on record as saying we need a BRAC [Base Realignment and Closure],” Lt. Gen. David Halverson, the commander of U.S. Army Installation Management Command and assistant chief of staff for installation management, said April 21. “BRAC is a four-letter word,” said Halverson, speaking at an Association of the United States Army Institute of Land Warfare breakfast. “It has bad connotations to everyone, and we know that better than anyone.” However, the Army is drawing down its forces from 562,000 soldiers to 490,000, and then to 450,000.  The Army cannot get smaller and “still keep the lights and water on for those infrastructures,” Halverson said. At the very least, a quantitative analysis of Army installations is called for, Halverson said. “Let the numbers speak for themselves, so we can get the emotions out of it.” Halverson said the Army currently has an 18 percent excess in infrastructure, and the number will continue to grow as the Army gets smaller. That excess “translates into a half a billion dollars a year” in unnecessary spending for the Army, Halverson said. In this era of constrained fiscal resources, “everything that goes on” in the Army is under scrutiny.Halverson said that the Army chief of staff, Gen. Ray Odierno, has directed him to save money on installations so Odierno can have more flexibility in force structure decisions.Even though the Army has made successful efforts in water and energy conservation, “we still have to pay $1.6 billion dollars across the whole Army” for electricity and water, said Halverson. Utilities must be provided so the installations can function, Halverson said.“We have to decide what to relocate or tear down to decrease our costs on posts,” he said.Halverson then compared out-of-date infrastructure to a medical condition. “When you take risk with your installations, it’s like saying ‘you have high blood pressure, you probably need to get a stent, but just wait a year,’” he said.“We’re seeing that we’re much more fragile on the health of these installations,” he added, saying that the Army needs to “right-size” its infrastructure “to ensure that our dollar buys us what we need.”