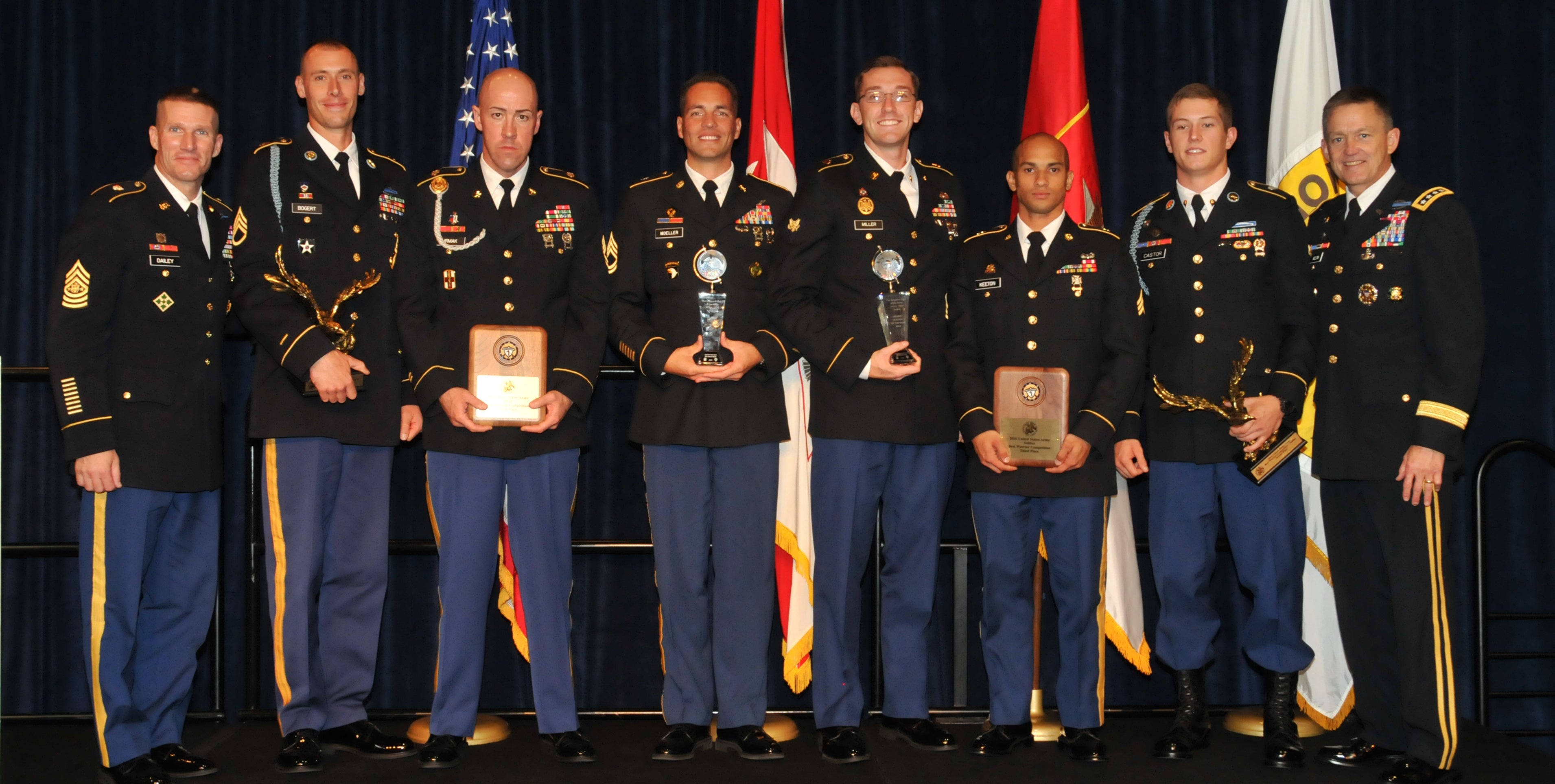 Spc. Robert Miller has been named the Army’s 2016 Soldier of the Year, and Sgt. 1st Class Joshua Moeller is the 2016 Noncommissioned Officer (NCO) of the Year. The two winners of the Army’s Best Warrior Competition were announced Monday at the Association of the U.S. Army’s Annual Meeting and Exposition.

“It’s a great day to be a soldier,” said Sgt. Maj. of the Army Daniel A. Dailey, who hosted the awards and recognition luncheon where the results of the competition were made public.

Dailey described the event as “a tough challenge, from shooting weapons to looking for land navigation points in the woods under adverse conditions, to other essential warrior tasks.”

Gen. Daniel B. Allyn, Army vice chief of staff, said the Best Warrior competitors are “the best of the best, and they exemplify the theme of this year’s AUSA Annual Meeting: ‘Ready Today, Preparing for the Future.’ ”

“This competition provides a venue for soldiers and noncommissioned officers to demonstrate excellence and to distinguish themselves,” he said.

Allyn congratulated all of the competitors, saying, “Each and every one of you are winners. Each of you has selflessly demonstrated toughness and immense competence.”

The Best Warrior Competition, overseen by Dailey, took place at Fort A.P Hill, Va. This year’s competition featured 20 athletes: one NCO and one soldier from 10 commands across the Army.

With over 183,000 soldiers supporting combatant commanders around the world, “the scope, scale and complexity of what our Army does every day is awe-inspiring,” Allyn said. “It illuminates why we must remain trained and ready… that’s why the Best Warrior Competition is so important.”

“It is because of the American soldier that I remain confident in the ability of America’s Army to prevail today and tomorrow,” he said.

Prior to the announcement of the Best Warrior Competition winners, a special ceremony was held to recognize retired Lt. Gen. David E. Grange Jr. as the second Honorary Sergeant Major of the Army.

Dailey said the award has only one requirement: “A lifelong dedication to soldiers and their families.”

In accepting the award, Grange said he was “overwhelmed. I’ve had so many great things happen to me in the Army, but this takes the cake.”

He described his experiences fighting in World War II, Korea and Vietnam, saying, “NCOs saved the Army” in each of those conflicts.

“What’s so wonderful about this Army is the people, who come up to do something that’s not very pleasant, but must be done for the good of the nation,” he said. “God bless you all, God bless the U.S. Army, and God bless America. Hooah!”