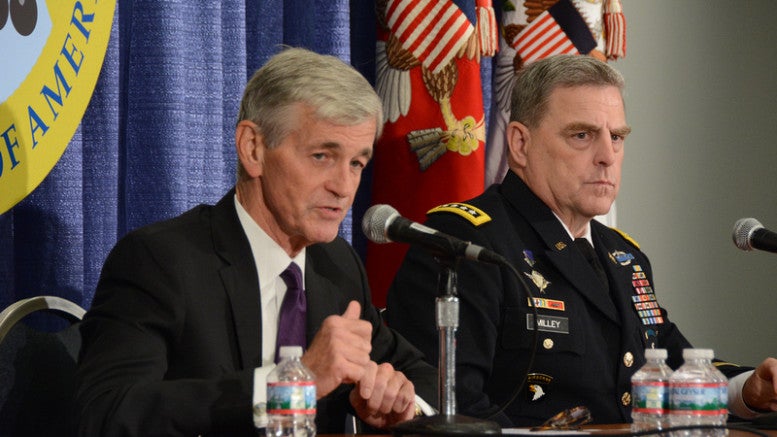 The Army’s top two leaders on Monday repeated the warning that the continuing clash of declining budgets and growing global commitments threatens the ability of the Army to meet future challenges.In his speech at the opening ceremony of the Association of the U.S. Army’s Annual Meeting and Exposition, Secretary of the Army John M. McHugh warned, “If we continue to strip resources from this Army, the time will come when somebody is going to have to say there are things we cannot do.”Army Chief of Staff Gen. Mark A. Milley, in his joint news conference with McHugh, noted that while the U.S. currently was safe, “There are a lot of things going on around the world that represent very real threats” not only to the security of the U.S., but to “the security of our friends,” Milley said. “It is essential that we maintain our capability.”McHugh, who had served in Congress for 17 years, said that that never in his seven years as secretary has DoD received a budget on time. At the news conference, he noted that again the government was being funded under a continuing resolution, which provides money at basically last year’s level but restricts new initiatives.“At the moment, we do have sufficient funds,” he said, warning that if Congress cannot agree on a normal funding bill in December, “a full-year continuing resolution has the potential to create some serious problems for the Army.”McHugh and Milley also said that despite end-strength reduction concerns repeatedly expressed by Army leaders, there are no plans to seek relief from the current plan to cut the Army to 450,000.The secretary said all the services have been asked to “tweak” their budget proposals for fiscal year 2017 to reflect some of the significant changes in the global security situation, particularly the new threats posed by an aggressive Russia. The Army will respond to the concerns of U.S. allies in Europe largely through use of rotational forces, McHugh said.Asked about the threat from “hybrid” warfare such as what Russia has used in supporting separatist forces in eastern Ukraine, Milley said the term may be new but the technique is old. In response, the Army is shifting its training to prepare deploying forces for the full range of military challenges, from humanitarian assistance to full-spectrum conventional war, Milley said.In his opening remarks, McHugh noted that this was his seventh and final appearance before AUSA as secretary. After 42 years in public service, he said, “this job has been the singular honor of my career.”Milley noted that McHugh’s tenure was the second longest tenure in Army history. “He has done a remarkable job for our soldiers and their families,” Milley said.