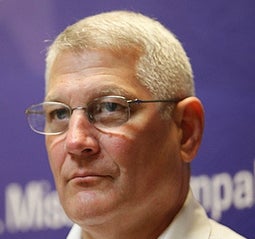 Army success depends on teaching soldiers to “maximize the potential that each of us brings when we don the uniform,” said retired Army Gen. Carter F. Ham, the former commanding general of the U.S. Africa Command, U.S. Army Europe and the 1st Infantry Division. Ham also said education makes soldiers good employees in the private sector.Speaking in Cleveland in late September at an event hosted by the Newton D. Baker Chapter of the Association of the U.S. Army, Ham said it is no accident that “our Army is blessed with such extraordinary soldiers.” He spoke at John Carroll University, where he was an ROTC cadet in the 1970s.Ham is chairman of the National Commission on the Future of the Army, an eight-member panel established by Congress to study the size and force mix of the Army. The commission is expected to give its recommendations on Army force structure to Congress and the president by Feb. 1.“Excellence results from a concerted effort to develop leaders,” Ham said. “To be sure, the stuff that young people bring with them to the Army matters: family, school, sports, faith. All of those things contribute to the character of a soldier. But what the Army does so well—in my admittedly prejudiced opinion—is maximize the potential that each of us brings when we don the uniform.”Ham, who retired in 2013 after 39 years of service, said he is an example. “Guess what? I did not start out in the Army as a four-star. I started as an infantry private,” he said. “I had great NCOs who mentored me, coached me and taught me.” After two years as an infantryman in the 82nd Airborne Division, Ham was accepted into the Army ROTC program at John Carroll University, graduating in 1976 with a political science degree and commissioned as the school’s Distinguished Military Graduate.“Throughout all my years of service, I received guidance, encouragement … and benefited from role models good and bad,” he said, noting he is a strong advocate of leadership training and development because not only is it essential in an Army career, it also has post-service benefits.Eighty percent of soldiers leave the Army before retirement, Ham said, but the leadership development training and experience they gain in the Army “can be of immense benefit to employers across a wide spectrum.”A 2013 study by Northwestern University’s Kellogg School of Management found that business executives with military service perform better under pressure, are less likely to make risky investments of resources, and are 70 percent less likely to commit fraud, Ham said.