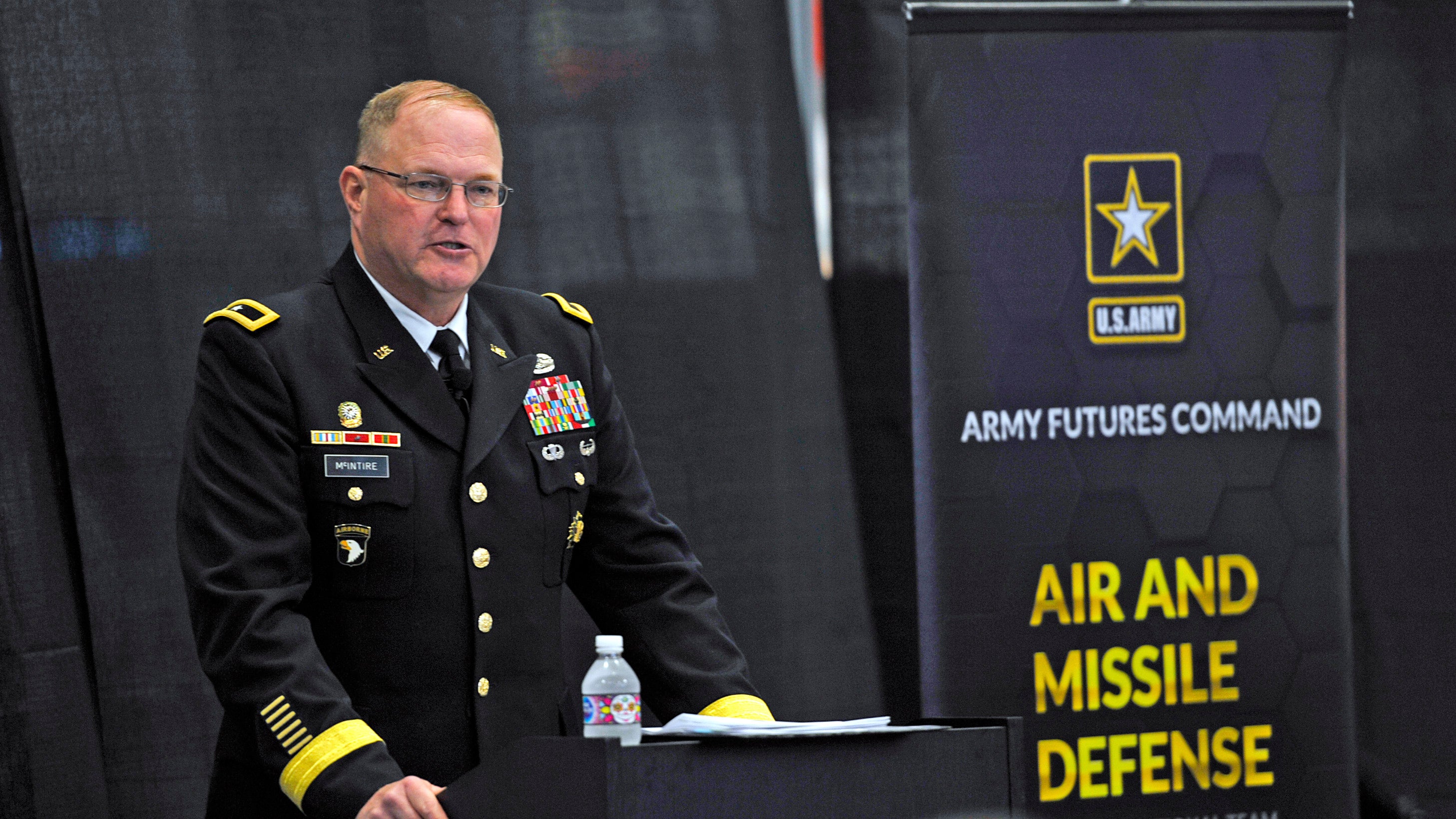 This morning’s Warrior Corner presentation at the AUSA Annual Meeting and Exposition, led by the Army’s Air and Missile Defense (AMD) Cross-Functional Team (CFT), highlighted successful efforts credited to a close working relationship between the new CFT and the Army’s Program Executive Office (PEO) for Missiles and Space.

One of those efforts involves the ongoing testing and planned introduction of directed energy capabilities into the Army air defense arena.

Brig. Gen. Randall McIntire, director of the AMD CFT, opened the panel with a review of Army capabilities against threats likely to be faced in multi-domain operations. In terms of tactical ballistic missiles, for example, he offered, “To our adversaries, rest assured that we’ve got that mission-set covered. We know how to do it. We’ve been doing it since [Operation] Desert Storm, and we continue to get better and better as we work in that space.”

McIntire continued, noting the Army continues to look for less expensive and more effective ways to deal with other aerial target sets.

“There is not one [air defense] tool that does all that,” he said. “You find that you need to have a variety of tools, and where you can get some ‘twofers,’ for example, that can span a couple different threat sets there, those areas where we are really focusing.”

“As we move forward, we are going to have a mixture of guns and missiles, and then we are moving toward directed energy very heavily,” he said, adding that he expects to see formations equipped with directed energy capabilities within the next 5 to 10 years.

“So that’s how we are shaping our strategy and moving forward on getting the cost per intercept down as well,” he added.

Brig. Gen. Robert Rasch, PEO Missiles and Space, outlined the M-SHORAD effort, explaining how it began under the PEO but now reflects support and cooperation across the CFT.

In addition to the Army’s platform goals, Craig Robin, senior research scientist for high-energy lasers, offered a quick review of the supporting technologies and their own technical milestones.

He described a goal of a Multi-Mission High Energy Laser system that will place a 50-kW laser on a Stryker vehicle platform, projecting a technology readiness Level 7 for that capability in fiscal 2021.

Growth to that system begins with today’s Mobile Expeditionary High Energy Laser. Also Stryker-based, MEHEL was tested/demonstrated with a 2-kW laser in 2016, a 5-kW laser in 2017 and is projected for a 10-kW laser this year.

Robin added that the 10-kW demonstration planned for this year will reflect a laser technology that is representative of what the Army plans to put in 50-kW and potentially 100-kW systems.