After 49 Years, Medal of Honor for Vietnam War Pilot

After 49 Years, Medal of Honor for Vietnam War Pilot 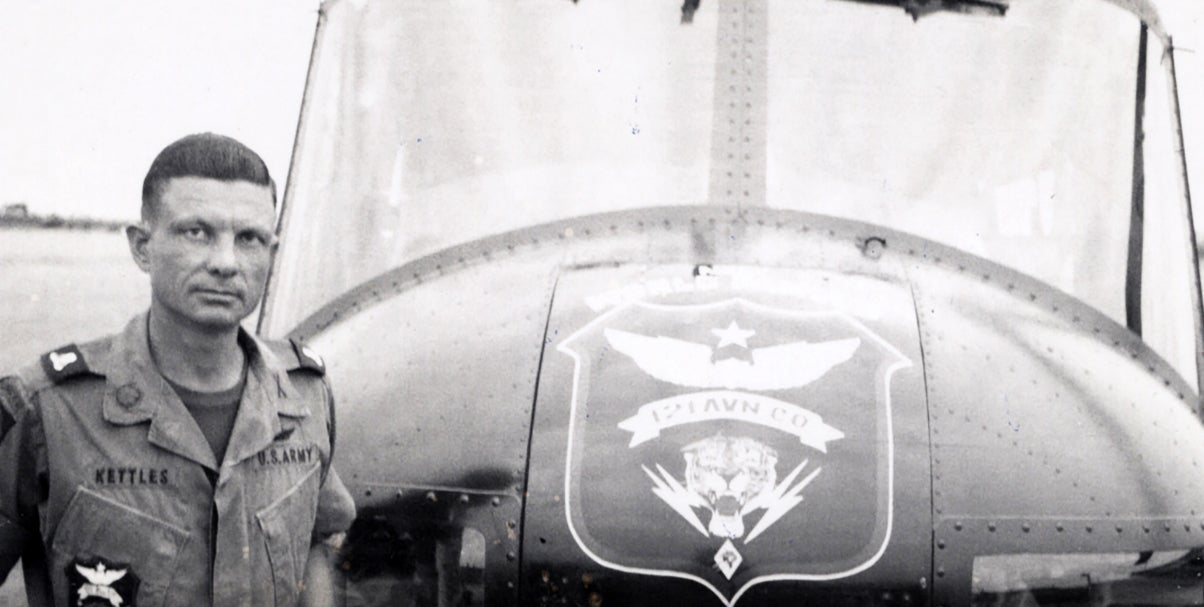 Retired Lt. Col. Charles “Chuck” Kettles received the Medal of Honor from President Obama in a July 18 White House ceremony for flying his helicopter into a white-hot landing zone to rescue dozens of soldiers under withering enemy fire during the Vietnam War.

“To the dozens of American soldiers whom he saved in Vietnam half a century ago, Chuck is the reason they lived, came home and had children and grandchildren—entire family trees made possible by the actions of this one man,” Obama said in the ceremony, which was attended by Kettles’ wife, eight of his 10 children, three of his grandchildren, and several Army colleagues who were involved in that battle 49 years ago.

The White House ceremony was the culmination of a multiyear effort by William Vollano, a volunteer with the Veterans History Project under the Library of Congress. Vollano interviewed Kettles and subsequently launched an effort to have Kettles be awarded the Medal of Honor.

Then-Maj. Kettles deployed to Vietnam in early 1967 as a platoon leader and aircraft commander with the 176th Aviation Company, part of the 14th Combat Aviation Battalion in the Americal Division. On May 15, the 176th dropped a reconnaissance patrol into a valley that was quickly confronted by a heavily armed, battalion-sized enemy force. In a battle that raged for hours, Kettles made several trips under continuous fire to bring in ammunition and reinforcements and evacuate a total of 44 wounded soldiers.

When Kettles made his final trip back to base, mechanics counted almost 40 bullet and shrapnel holes in his helicopter. “That’s just what war is,” Kettles said. “We completed the thing to the best of our ability, and we didn’t leave anyone out there.”

Obama said the Army’s warrior ethos “is based on a simple principle: A soldier never leaves his comrades behind. Chuck Kettles honored that creed not with a single act of heroism, but over and over and over. And because of that heroism, 44 American soldiers made it out that day.”

Kettles joined the military after receiving a draft notice at the close of the Korean War and served in post-war Korea, Japan and Thailand. A few years later, when the Vietnam War broke out, he volunteered for service again.

He sees his new honor as recognition for everyone who fought that day in Vietnam. “The Medal of Honor is not mine alone,” he said. “It belongs to them as much as it belongs to me.”

“The bottom line on the whole thing is simply that those 44 did get out of there and are not a statistic on the wall,” he said. “The rest of it is rather immaterial, frankly.”