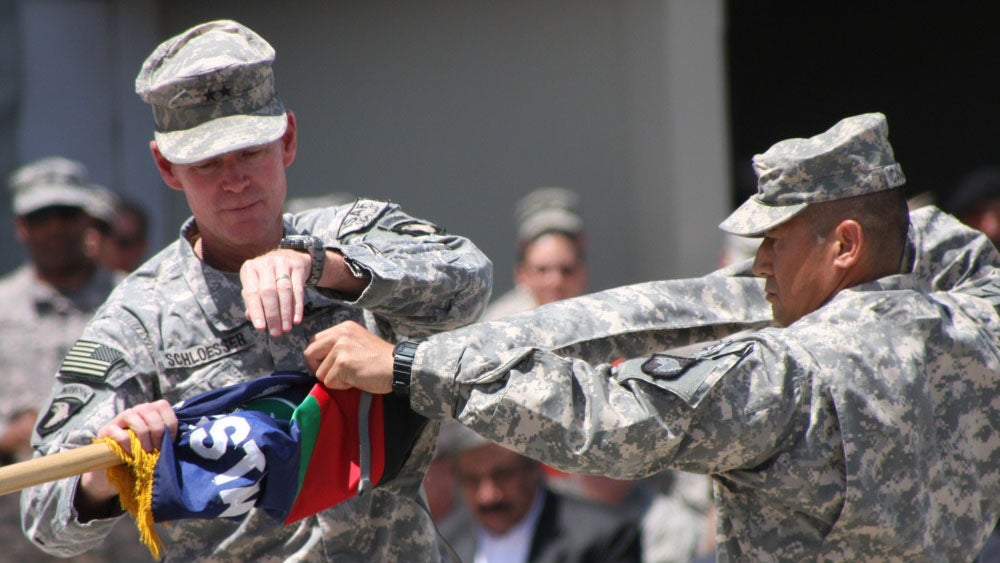 For retired Maj. Gen. Jeffrey Schloesser, writing his book, Marathon War: Leadership in Combat in Afghanistan, was cathartic as he processed his wartime experiences.

“War is the most brutal of human endeavors, and I have experienced enough war to know to take cover when politicians, poets and armchair warriors speak extravagantly of patriotism and national honor,” Schloesser, a former commander of the 101st Airborne Division, writes in the introduction.

During the 15 months that Schloesser commanded Regional Command-East in Afghanistan in 2008 and 2009, he made many tactical decisions and anticipated their strategic impact. After wrestling with difficult moments during the war, Schloesser felt compelled to relay his experiences as a soldier in his book.

“I felt … a catharsis. As I went through my journals, I discovered things that I had tried to forget, either about the harshness of combat or how hard it was,” Schloesser said Sept. 8 during a Thought Leaders webinar hosted by the Association of the U.S. Army. “There were times when I was just felt like my spirit was being torn. I was doubting myself sometimes, doubting a war, and I wanted to relay that in the book.”

Bravery on the battlefield, though, is not the defining feature of a good leader, Schloesser said. It takes moral courage and character to be a true leader. “I'm talking about moral courage, which is the ability to stand up … for what's right, do the right thing even when people are saying, ‘Don't do that.’ … It's really, really hard,” Schloesser said.

As future military leaders grapple with U.S. presence in the Middle East and around the world, understanding culture is “absolutely critical,” Schloesser said.

“We need to understand, first and foremost, that many environments in which we're going to have to serve, the culture there is very different than ours,” Schloesser said. “We need to go immediately to school on the culture of the people because the people tend to be everything, either they're the enemy or the people that you're trying to protect.”

Turning to the current situation in Afghanistan, following the evacuation operation and withdrawal of U.S. troops after 20 years of war, Schloesser said he anticipates the Taliban will find governing Afghanistan much more difficult than the takeover itself.

“It’s easy to conquer the world on horseback, it's much more difficult to govern the world when you get off the horse,” Schloesser said, referring to a quote by Mongol leader Genghis Khan. “And that is exactly what I think we’ve found, that's what others have found, in Afghanistan, and it’s clear that the Taliban are going to find as they go forward.”