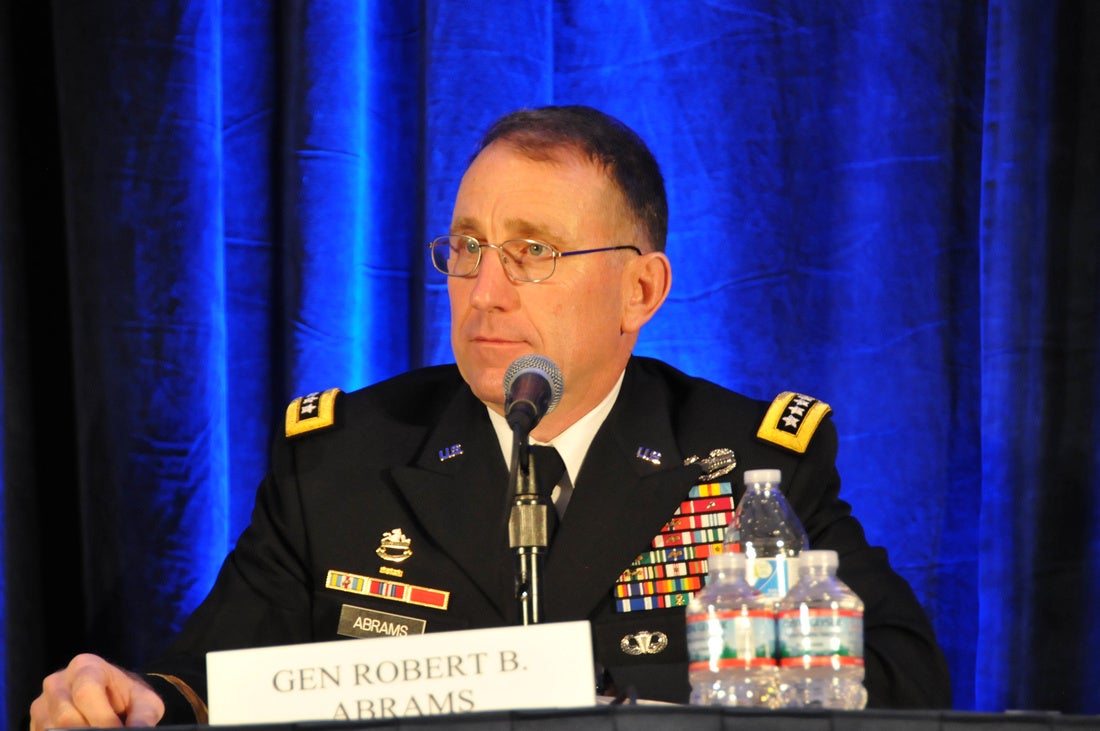 The Army needs to change its mindset about readiness, said Gen. Robert B. “Abe” Abrams, commanding general of U.S. Army Forces Command. “We have to be ready all the time, not at specific points of time,” he said, adding that the most precious resource for readiness is not money, but time. Abrams made his comments on Wednesday during a forum on building and sustaining readiness, at the Association of the U.S. Army’s Annual Meeting and Exposition.“We can’t be lulled into a false sense of security that we’ll be able to set the conditions and the time and place for getting involved,” Abrams said. “We need sustainable readiness…We can’t create readiness overnight.”Abrams also said that today’s Army is “rusty in our core competencies. I am not overstating” the severity of the situation, he added later. “It’s a little frightening.”Panelist Laura Junor, principal deputy undersecretary of defense for personnel and readiness, noted that the purpose of DoD is to “generate military capability that we hope we will never use, but to dominate it we need it.” However, budget woes and sequestration have led to what she called “a toxic environment for building and maintaining readiness.”“Readiness takes a long time to create,” she said, adding that if anything goes awry with the manning, equipping and training pipelines, “it takes an even longer time to mitigate. “Readiness for one mission doesn’t mean readiness for all missions,” she added.Lt. Gen. Stephen J. Townsend, commanding general of XVIII Airborne Corps and Fort Bragg, N.C., noted that at Fort Bragg, “Readiness is our culture – that’s how we live.” Special Operations Forces must be ready to deploy with six hours’ notice, he said, while other soldiers may not have more than 18 hours’ notice.Townsend said while he’s “a huge fan” of combat training centers, home station training needs to be improved to sustain readiness because when troops are needed, they must be ready to deploy “as they are, from their home station.”Abrams agreed. “In an unpredictable world, when the call comes we won’t have time to send units to combat training centers before deployment,” he said.Also on the panel were Michael E. O’Hanlon, a national security and defense policy analyst at Brookings Institution; and Maj. Gen. Courtney P. Carr, adjutant general of Indiana National Guard. O’Hanlon said the Army shouldn’t dismiss readiness for “large, conventional war” despite the “complex, messy stuff” that’s occurring in the world. Carr called readiness-building “a team sport” and said, “We have to change the culture of readiness as a cost. It’s an investment.”In the question-and-answer session that followed the panelists’ remarks, one uniformed questioner said that perhaps he was asking a “career-ending” question, but he wondered whether the Army was “going too far down the readiness road” and focusing on readiness at the expense of force strength. After jokes about hiding his name badge so panelists wouldn’t learn his identity, Abrams said he appreciated the questioner “challenging assumptions. I’m with you, man,” Abrams said. “Hell, I might even hire you.”