2015 NCO, Soldier of the Year Announced

2015 NCO, Soldier of the Year Announced 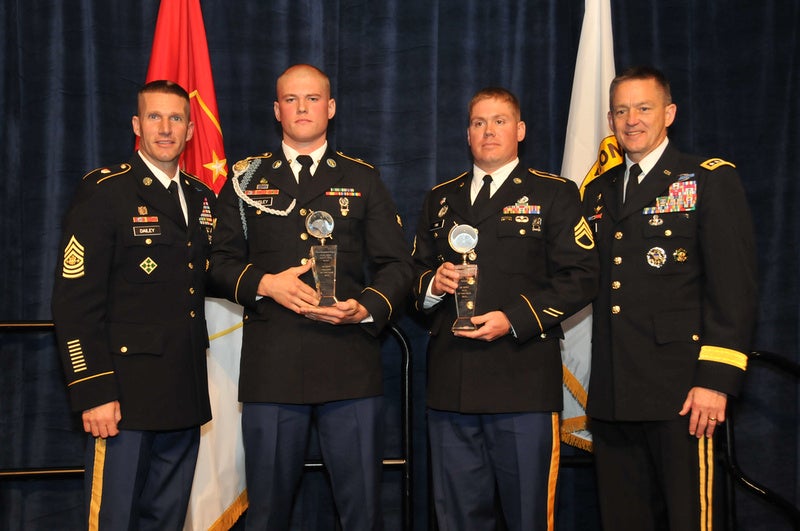 Stealing a moment of drama from the annual Academy Award presentation, Master Sgt. Michelle Johnson, public affairs NCO for the Sergeant Major of the Army, opened the sealed envelope containing the names of the winners and runners-up in the 2015 NCO and Soldier of the Year competitions.Staff Sgt. Andrew Fink, U.S. Army Reserve Command, was named NCO of the year; Spc. Jared Tansley, U.S. Army Europe, took Soldier of the Year honors.Staff Sgt. Kevin Simpson, Military District of Washington, was the runner-up in the NCO competition, and Sgt. 1st Class Elijah Howlett, U.S. Army Europe, was second runner-up. In the Soldier of the Year competition, Spec. Cruiser R. Barnes, U.S. Army National Guard, and Spc. Emanuel L. Moore, Special Operations Command, were runner-up and second runner-up, respectively.The six soldiers were honored at an awards luncheon Monday during the Association of the U.S. Army Annual Meeting and Exposition. They were chosen from a field of 26 warriors representing 13 U.S. Army commands in a test of skills, knowledge and Army professionalism.The luncheon was hosted by retired Sgt. Maj. of the Army Kenneth O. Preston. It featured Vice Chief of Staff of the Army Gen. Daniel B. Allyn as keynote speaker, as well as the U.S. Army Chorus singing a medley of songs celebrating individual Army divisions.In addressing a standing-room-only audience, Allyn said, “The greatness of our soldiers is manifest in the Army’s sergeants majors and NCOs. America’s championship team,” he said, “is the United States Army.”Allyn cited Army operations worldwide in which NCOs have “exercised and defined [their] craft . . . [for] the best Army in the world, reinforcing a culture of dignity and respect for all.”