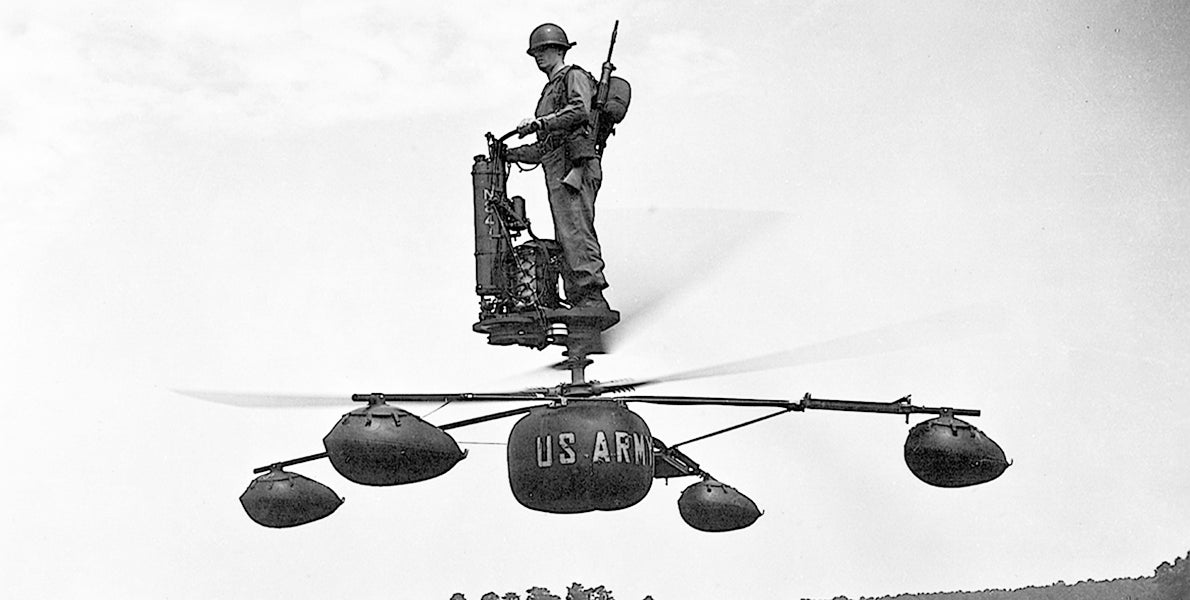 Some of the Army’s brightest minds are involved in a project named for an Army aviation pioneer that is looking for breakthroughs in science, technology and human performance that would be as significant as the birth of combat aircraft. One possibility would be having soldiers riding hoverbikes or wearing jetpacks as they conduct counterinsurgency operations, according to Dr. Christopher Rice, deputy director of the Army Chief of Staff’s Strategic Studies Group.

Rice, speaking at the 2016 Mad Scientist Conference at Georgetown University’s Center for Security Studies, said Project Hap Arnold, named for former Gen. Henry H. Arnold, is an initiative of Army Chief of Staff Gen. Mark A. Milley: Come up with something as dramatic as the birth of Army aviation in terms of changing warfare. Milley tasked the group with identifying “ideas are just birthing now that will pay off in future conflicts, 20, 30 or 40 years hence,” Rice said.

Arnold, who learned to fly with the Wright brothers, was one of the military’s first pilots and oversaw the pre-World War II expansion of the Army Air Corps. He is the only person to ever hold a five-star rank in both the Army and Air Force.

Project Hap Arnold is looking at what Rice called the “deep future.” One example, he said, is having soldiers conducting fluid, fast-moving counterinsurgency and wide-area security operations using lightweight, one-person aircraft that have vertical takeoff and landing (VTOL) capabilities. This would make soldiers more maneuverable and not require a large, costly infrastructure, Rice said. “The formations that conduct wide-area security should not be the same formations that conduct combined-arms maneuver,” Rice said.

He cited two examples of VTOL systems that may fit the new operational vision he described. One is a British-developed hoverbike, basically two, three or four shielded fans attached to a motorcycle engine. Another is a New Zealand-developed twin-engine jetpack that can be strapped to an individual’s back.

This is not a new idea. In the 1950s, the Army considered what it called the “grasshopper” strategy where soldiers would use jetpacks to quickly cross large areas of ground, with Bell Aerosystems Co. designing a rocket belt and what it called Small Rocket Life Devices. The contract was canceled after a few demonstrations.

Project Hap Arnold is designed to question what the future might hold, and how to give soldiers an advantage, Rice said.

“Will the tank become obsolete in the future? I don’t know,” Rice said. “That remains to be sorted out. It is possible precision attack will make them obsolete.” Or, he said, new technology may transform tanks to keep them viable.