‘Angst Across the Force’ is Concern for JCS Chairman Nominee Dunford

‘Angst Across the Force’ is Concern for JCS Chairman Nominee Dunford 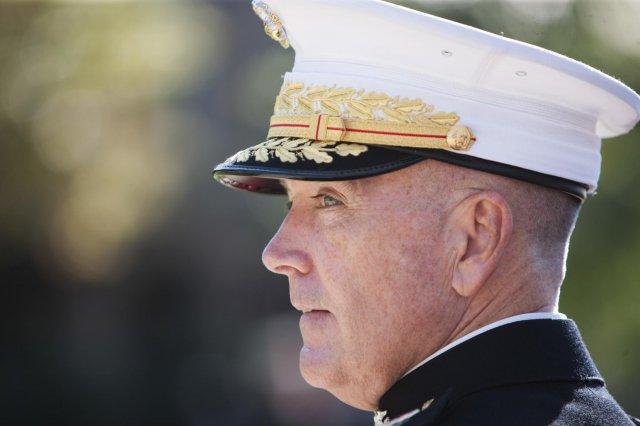 The Marine Corps general nominated to be the next chairman of the Joint Chiefs of Staff says uncertainty about military budgets and force structure are hurting morale, and he opened the door to rethinking modernization of expensive weapons to preserve current capabilities. “There's a tremendous amount of angst across the force, and a large part of that is driven by the uncertainty about how big the force will be, what will happen to their particular careers, and will we have the equipment necessary to accomplish the mission,” said Marine Gen. Joseph F. Dunford as he testified last week before the Senate Armed Services Committee about his nomination to succeed Army Gen. Martin E. Dempsey as the military’s highest ranking officer. Dunford is the current Marine Corps commandant who led U.S. and NATO forces in Afghanistan in 2013. His appearance came the same day the Army announced where it would be making a 40,000-soldier cut in force structure by 2017. Dunford warned senators that budget uncertainty is hurting national security planning, and failure to reach a budget compromise could have devastating results. “If we go into sequestration, we'll be unable to support the current strategy that we have to protect our nation,” Dunford said. “And, quite honestly, the readiness of the joint force, the modernization of the joint force will suffer what I would describe—and without exaggeration—are catastrophic consequences.” In written answers to questions posed by the committee, Dunford said he is concerned about the increase in risk posed by reducing land forces. He said he is “confident” the Marine Corps can meet its requirements with 182,000 Marines. “If confirmed, I will work to better understand the requirement for Army end strength,” he said of the planned reduction to 450,000 active-duty soldiers. “As force structure changes are made within both the active and reserve components, we will continue to assess the impact of these changes and make adjustments as necessary to ensure we maintain the health of the force, retain an effective balance of active and reserve forces, and continue to meet the needs of our strategy,” Dunford said to a question about aligning the Army’s size and force structure to meet requirements. Part of the reason the Army is losing soldiers is cutting defense costs so there is more money for modernization, with the F-35 joint strike fighter one of the big expenses. Asked in written questions whether the nation can afford to spend $12 billion to $15 billion a year on a purchase of more than 2,400 aircraft, Dunford said while it is important to make technological advancements, a review is underway to determine “the correct number” and look at costs. “The department has been working diligently to make the overall cost per F-35 more affordable,” he said.