We held a general membership meeting during lunch where we were honored to have Lieutenant General H.R. McMaster speak.  There were over 150 people present with active duty, retired, Department of Army Civilians, and members of industry present.  Looking across the room it was easy to see the strong support that we get from our community.  The photos below show just a few of those attending like Kevin Coggins (PM for Positioning, Navigation, and Timing (PNT), Medhat Abuhantash (Director of CECOM’s Software Engineering Center (SEC), BG Thomas Todd (Dep CG for RDECOM and Senior Mission Commander at Natick Soldier Systems Center) Gary Martin (SES) PEO for Command Control Communications – Tactical (C3T), as well as Colonel Adams and Colonel Williams from the Army Test and Evaluation Command (ATEC).

We are always looking to increase our membership but at events like this it can be difficult to determine who is and who is not a member.  We have taken the time and effort to provide name tags and added green tabs to those that we show as being members of the chapter.  You can from the two photos below what we’ve done.  The result has been that we either identify potential members who those that are members but not affiliated with our chapter for whatever reason.  Note:  Our state president, Mary Jane Jernigan in attendance (photo below)

We concluded the day by celebrating the birthday social at the post golf course (Ruggles).  We pushed this hard and constantly reminded not only our members but the general public as well.  These are the three flyers that we used to advertise this year’s event.  Note that there is one for current Soldiers, families, and Veterans.

As noted above, we started at 4:00pm.  At 5:00pm we had the DJ play retreat and to the colors.  We then sang the Army song.  After that we asked MG(R) Randy Strong (former CECOM Commander), 1SG(R) Mike Murphy, and a cadet from Villanova to cut the cakes that we had purchased for the event.  CSM James Snyder from RDECOM supervised the cutting.

Afterward we took a moment to specifically welcome all our Vietnam Veterans and ‘welcomed’ them home once again.

All in all, the MG Harry Greene, Aberdeen Chapter had a great day providing an outstanding professional development forum for our members and commemorating the U.S. Army’s 241st Birthday while at the same time recognizing our Vietnam Veterans and their service to the nation.

Here are some photos from the social: 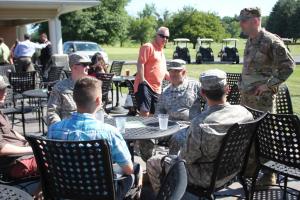 We invited everyone to attend.  Shown here are cadets here for the summer, the post chaplain, and the HHC Garrison Company Commander.  For the past few years we have provide a bus for Soldiers to attend our annual meeting.  We work that through the HHC Garrison Company.  Also shown is Angela Sheldon (Chapter Secretary) reinforcing that offer to the Company Commander and First Sergeant. 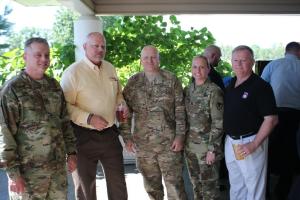 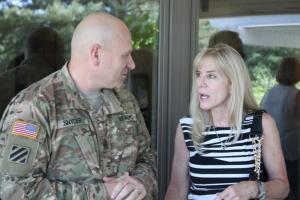 CSM Snyder is seen here speaking to Sharon Akers from St. John Properties.  St. John Properties is the landlord/developer of the Enhance Used Lease facilities on post where many industry members reside.  Sharon was also the driving force behind the establishment of the ‘Fallen Star’ memorial on post which honors MG Greene and all that have died in service to the nation.

'Fallen Star' Memorial in Honor of Major General Harold (Harry) J. Greene and the Warfighters and their Families from St. John Properties on Vimeo.