Due to the COVID-19/Coronavirus, AUSA has determined that it would be in the best interests of the community not to proceed with AUSA’s Rogers Strategic Issues Forum featuring GEN Murray. Out of concern for everyone’s health and welfare, we regretfully have made the decision to cancel this event. 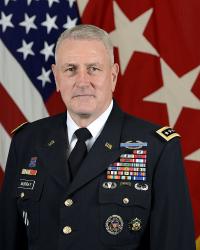 General Murray was commissioned as an Infantry officer in the U.S. Army upon graduation from the Ohio State University in 1982.  Throughout his career, General Murray has served in leadership positions and commanded from Company through Division, with various staff assignments at the highest levels of the Army.