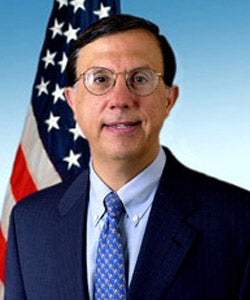 Office of the Under Secretary of Defense (Acquisition, Technology and Logistics)

Mr. Shay Assad assumed the role of Director of Defense Pricing in June of 2011. He is responsible for contract pricing matters within the Department of Defense (DoD). He serves as the principal advisor to the Under Secretary of Defense for Acquisition, Technology and Logistics (USD AT&L) and the Defense Acquisition Board on acquisition & procurement negotiation strategies for all major weapon systems programs, and major automated information systems programs. He is responsible for assisting the USD AT&L in the implementation of the Department’s Better Buying Power initiatives. Mr. Assad is DoD’s senior advisor for all program related contract negotiation matters, to include multiyear contracting. He also serves as co-leader and proponent of the Pricing and Contracting Community within the Department of Defense.

Upon graduating with distinction from the U.S. Naval Academy in 1972, he served two tours of duty aboard U.S. Navy destroyers and won recognition as the Outstanding Junior Officer, Fifth Naval District. He then served as a Naval Procurement Officer at the Naval Sea Systems Command.

In 1978, Mr. Assad began working for the Raytheon Company. He was promoted to Vice President – Director of Contracts for Raytheon in 1994, and was subsequently promoted to Senior Vice President, Contracts in 1997. As such, he was responsible for the contract negotiation and administration activities ($20 Billion) in all of Raytheon's businesses – both government and commercial. In addition to his contracting duties, Mr. Assad was given numerous program and business management special assignments by Raytheon's Executive Office. These assignments spanned participation in all three of Raytheon's major operating businesses (Government, Aviation, and Engineering and Construction). In 1998, he was promoted to Executive Vice President and served as the Chief Operating Officer and subsequently, as the Chairman and Chief Executive Officer of Raytheon's Engineering and Construction (RE&C) business with eleven offices world-wide, revenue of $2.7B and 15,000 employees. He retired from Raytheon in July 2000.

In April of 2006, Mr. Assad assumed the role of Director of Defense Procurement and Acquisition Policy (DPAP). He had previously served as the Assistant Deputy Commandant, Installations and Logistics (Contracts), Headquarters, Marine Corps, Washington, D.C.

He has received numerous Federal Service awards. Among them are: 1) the Secretary of Defense medal for exceptional civilian service; 2) the Secretary of Defense medal for meritorious service; 3) the Department of Defense Inspector General Joseph H. Sherick Award (the highest honor given to non-IG employees); 4) the 24th Annual Gilbert A. Cuneo Lecturer; 5) the inaugural recipient of the 2008 Osborne A. "Oz" Day Award as the Federal executive who has done the most to increase the awareness of Ability One employment opportunities for those who are blind or severely disabled, and 6) the E. Richard "Dick" Alley Career Achievement Award which is given to one federal employee whose long-term dedication and support of the AbilityOne Program is exemplary, and worthy of the Committee's highest recognition; 7) the David Acker Award for Acquisition Excellence; and 8) a Meritorious Presidential Rank Award.

In December 2015, Mr. Assad was the recipient of a Distinguished Presidential Rank Award.