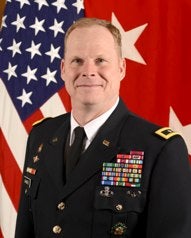 Most recently, Gamble served at the Assistant Deputy Chief of Staff for Logistics (G-4). There he provided overview and direction in the management of actions pertaining to logistics operations, readiness, strategy, integration, force projection and distribution.

Before joining the Army staff, Gamble served as the Deputy Commanding General of the 1st Sustainment Command (Theater). He oversaw the sustainment, equipping, training, mobilizing and deployment of logistics forces in support of CENTCOM and ARCENT operational priorities.

Gamble attended Western Maryland College, where he earned a Bachelor of Arts degree and was commissioned as an Ordnance officer in May 1985. He has Masters of Science degrees from the Florida Institute of Technology and from the Industrial College of the Armed Forces.