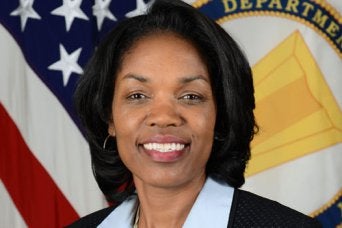 Acting Assistant Secretary of the Army

Prior to coming to the Army, she served as the Executive Director for the F-35 Lightning II Joint Program Office, Arlington, VA. The F-35 Lightning II Program is the Department of Defense’s initiative for defining affordable and sustainable fifth-generation strike aircraft. She has also served as the Assistant Deputy Chief of Naval Operations for Manpower, Personnel, Training and Education, where she was the civilian executive advisor for the planning and programming of all manpower, personnel, training, and education resources, budgeting for Navy personnel and for developing the information systems and tools to effectively manage the Navy Total Force.

Ms. Easter is a 1985 graduate of North Carolina State University with a bachelor’s degree in chemical engineering. She holds a master’s degree in engineering management from the Catholic University of America and is a graduate of both the Defense Systems Management College (DSMC) and the NAVAIR Senior Executive Management Development Program. Ms. Easter was appointed to the Senior Executive Service in December 2002, has over 30 years of Federal Service. She was awarded the Navy Meritorious Civilian Service Award in 2007, the Navy Superior Civilian Service Award in 2009, and the Navy Distinguished Civilian Service Award in 2013. She is also the recipient of the 2009 National Women of Color Award for Managerial Leadership, and the 2010 recipient of the Black Engineer of the Year Award for Professional Achievement.

Ms. Easter served as the Deputy Program Executive Officer for Tactical Aircraft Programs (PEO-T) from December 2002 through January 2007. In this capacity, she was responsible for providing acquisition, engineering and technical services to the Navy for the F/A-18, EA-6B, EA-18G, E-2, C-2, Aircraft Protection Systems, Air Traffic Control Systems and Combat Identification programs.