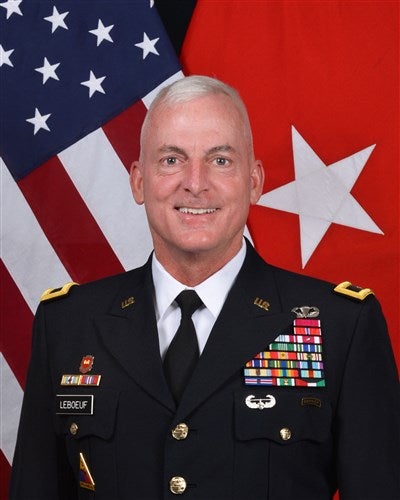 Brigadier General Eugene (Gene) J. LeBoeuf serves as the Deputy Commanding General for U.S. Army Africa and Commander of its Army Reserve Engagement Cell.  He was commissioned as an engineer officer in the Army Reserve in 1985.

LeBoeuf graduated as a Distinguished Military Graduate of the U.S. Army ROTC program and received a Regular Army commission in the U.S. Army Corps of Engineers in May 1985. He is a graduate (magna cum laude) of Rose-Hulman Institute of Technology with a B.S. in Civil Engineering, Northwestern University with a M.S. in Industrial Engineering and Management Science, Stanford University with a M.S. in Civil Engineering, The University of Michigan with a Ph.D. in Environmental Engineering, and the U.S. Army War College with a Master of Strategic Studies. In his civilian capacity, LeBoeuf serves as the Associate Department Chair, Director of Undergraduate Studies, and Professor of Civil and Environmental Engineering at Vanderbilt University, Nashville, Tennessee. He has published over 50 technical publications, including four U.S. patents, and was a recipient of the U.S. National Science Foundation’s Faculty CAREER Award. He is a registered Professional Engineer in Missouri and Tennessee, and is a Board Certified Environmental Engineer.

As an Army Technical Enrichment Program Fellow, he began his military career as a graduate student at Northwestern University. Following graduation, he was assigned to the 2d Engineer Battalion (Combat), 2d Infantry Division, South Korea, where he served as an Assistant Battalion S4, Platoon Leader and Task Force Engineer, and Company Executive Officer. He then served with the Nashville District, Army Corps of Engineers as the Deputy Area Commander in Pineville, Kentucky, Battalion Maintenance Officer for the 12th Engineer Battalion (Combat), 3rd Armored Division during Desert Storm, Assistant Battalion S3 for the 554th Engineer Battalion, and Instructor and Doctrine Writer with the U.S. Army Engineer School, Fort Leonard Wood, Missouri.