It was 0700 on 17 May when more than 90 US Army leaders and 8 allies and partners from across the Indo-Pacific region filed into a hotel conference room. Some left almost two hours earlier that morning to fight the inevitable on-island traffic in Hawaii, while others, exhausted from jet lag, arrived in search of the promised cup of coffee that undoubtedly awaited them, like any good Army event should. Against the backdrop of the waves of Waikiki in the background of the room, the leaders were uncertain what to expect.

“I thought this event would be death by PowerPoint” one soldier wrote in their AAR comment.

This event would be different. In the room sat director’s chairs on Astro turf with a backdrop of an 8- foot-tall activation board with large, stamped block letters and colorful designs that read “Junior Leader Solarium.” With three questions, the interactive board challenged leaders to think about the upcoming topics they would tackle and give them a chance to see how other Solarium participants thought. As if the appearance was not enough to indicate this event would be different, there was the lounge. The lounge provided a fun environment for the leaders to casually connect and build professional relationships, outfit with a foosball table, Jenga and sofas.

If the strength of a profession lies in the ability to stop, reflect, and collaborate then the Junior Leader Solarium is just what the doctor ordered. The event pushed participants to “think about what kind of leader you are to your left and right as well as up and down.” Day one focused on leadership among your peers, day two centered on thinking like a strategic leader and day three aimed to empower subordinates from a talent management perspective. By design, the participants also had the opportunity to listen to general session panels and speakers. Holding the Solarium in conjunction with the greater LANPAC Conference, and later, the AUSA Annual Meeting, allows participants to witness strategic level thinking in their theatre and beyond.

After beginning their first day in general session presentations, the leaders completed a Trust Building Exercise. The overarching question: What do you do if you find out there is cheating in your unit? The exercise was complicated with interpersonal and professional relationships, and unit chemistry all at risk. The scenario sought to tackle the challenge of destructive competitiveness within our Army: the need to win so desperately that we place our Army values in jeopardy.

A walk around the room allowed senior leader moderators to listen to the different perspectives of each leader. Some questions were easy, while others made leaders ponder what they would do and how they would manage the situation in their unit. The table conversations were rich with the input from Captains, Sergeants First Class, Warrant Officers, and Department of Defense civilians, but the true depth of perspective was the point of view the international partners and allies brought to the discussion. Through a simple exercise about cheating, the leaders were able to learn about themselves, their fellow American participants and the unique opinions of the international allies and partners on whom we rely. 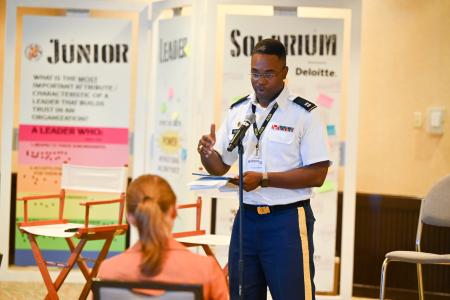 Participants then saw leadership through another lens from the 8th Military Police Brigade team. The day culminated with SMA Grinston answering questions from the leaders. The questions to the SMA ran the spectrum from “will there be more changes in the ACFT” to training practices specifically in the Indo- Pacific region to talent management for Noncommissioned Officers. SMA Grinston answered all questions with opportunities to revisit initiatives that may have fallen on the backburner due to competing priorities.

Ending the day, one leader asked, “Sergeant Major what keeps you up at night?”

“I want to eliminate suicide and eliminate sexual assault in the Army, not one, none, zero. So, I put a lot of my personal effort into that, how do we do better with that. Imagine, would it be ok if we lost a battalion? That is how many soldiers died of suicide last year- that is like 300.” It was a sobering reminder that within their units, leaders that sat in the room can have a great impact on strategic-level goals that impact the entire Army.

On day two of the Solarium, the leaders had to put their strategic thinking caps on when the William & Mary Whole of Government Center of Excellence presented their program on ‘Navigating Great Power Competition.’ The Solarium leaders underwent a 1-hour crash course setting the stage for a scenario- based exercise focused on framing and solving a significant leadership problem in the Indo-Pacific. Each group read and synthesized a situation regarding a power struggle between China and Thailand.

Through the exercise, leaders received invaluable direction regarding architecting ‘smart’ strategies at

all levels and balancing both threat and position during power competitions. 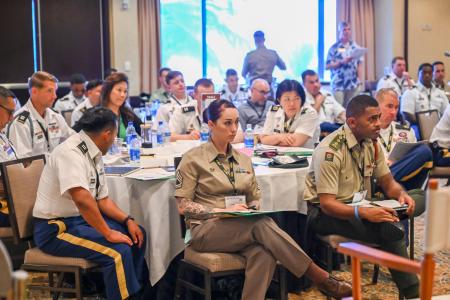 The day ended again with a chance for Solarium leaders to glean insight from senior Army leaders, this time CSM Scott Berzak, CSM of USARPAC. He spoke at length about retaining good soldiers.

“Get to know [the] men and women that you lead,” Berzak said “this is the audience that has the most impact on those junior soldiers. This is the group that will keep them here. Some of them don’t know

they need to stay, and you all can be the ones to convince them. It shouldn’t be getting the mission done vs. helping someone navigate their career, it isn’t one or the other.” His comments served as an introduction to the topic leaders would explore the next day: Talent Management and Human Capital.

The final day of the Solarium included an expert panel consisting of Deloitte senior managers, John Forsythe and Steve Green, along with CSM Rob Haynie (Division CSM, 25th ID; former member of the

Army’s Talent Management Task Force), LTC Amber White (Division G1, 25th ID), and MAJ Devan Smith (Brigade S1, 8th MP Brigade). Their animated discussion focused on the expectations of today’s talent, the impact that technology has on the work we do, how careers will change in the future, and some of the differences between the military and private sector workforce. John Forsythe shared Deloitte’s top 6 trends when studying talent management and human capital development. While all 6 certainly resonated with the leaders, one specifically touched on what CSM Berzak tackled the previous day: Providing meaningfulness and purpose.

“If you can help your team understand the purpose [of the job] you will have higher retention, people will stay longer and will be highly engaged and satisfied. They can answer the question: Why am I doing this?” added John Forsythe. Forsythe argues the power of purpose comes inherently to most soldiers, but how to keep them engaged and satisfied rests with the leaders.

Leaders finished the Solarium excited about the important discussions had with their tablemates. They left eager to share new information with their units as they continue to teach the next generation of competent and confident soldiers. 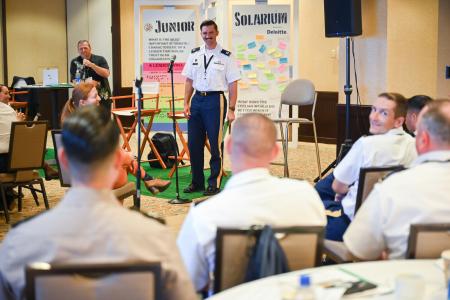 “As our unit is still new and heavily employed, building trust vertically is a struggle as we adapt. Destructive competitiveness is very relevant. Continuing conversations through open forums within our unit similar to this can help” said one AAR comment.

As for the soldier who started their AAR comment with an expectation of “death by PowerPoint” the leader ended with, “I was pleasantly surprised this event was engaging and something that I wish more soldiers from my unit had a chance to experience.”

As the AUSA Center of Leadership continues to plan for the next Solarium, happening at this year’s AUSA Annual Meeting in October, participants can expect to see one major change: the name, “Junior Leader Solarium” to “Leader Solarium.” These leaders at the Captain and SFC level are no longer junior leaders but, in most cases, senior leaders in their companies. The focus will also change, while leaders at the first Solarium focused on the issues and problems within their specific INDOPACOM region, leaders at the Solarium next month will open the aperture to the entire Army. During the October solarium, leaders will have a forum to provide bottom-up feedback to help senior leaders solve some of the

Army’s biggest challenges today. Future Solarium leaders will see several flag officers and strategic leaders in the room and will have an invaluable leadership opportunity to offer solutions to decision makers which will immediately impact the Army in which they serve and ultimately strengthen the Army profession.