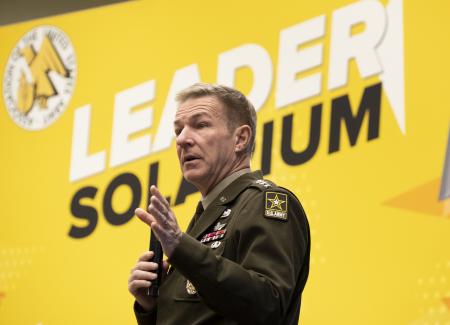 This year’s AUSA Annual Meeting featured the Inaugural Leader Solarium hosted by GEN McConville. On Monday, 10 October, 105 Army Leaders (CPT, CW3, CW2, SFC and some GS civilians) walked into room 207 at the Walter E Washington Convention Center. The room was unlike anything they had seen before in one corner a coffee truck, in another: a commissary area, and rounding out the room: a selfie station and a cubby space. While the space was upbeat, engaging, and modern, what happened inside the room was even better. These leaders, some resistant at first, left inspired and ready to help change the Army.

The purpose of the Leader Solarium was to provide bottom-up feedback to the Army’s most Senior leadership. On Day 1, GEN McConville, Chief of Staff of the Army, spent an hour with these leaders briefing them and answering and asking questions. Then it was time to go to work. The leaders were challenged to come up with ideas that they could implement at their level with the support of Senior Leaders at the Department of the Army level. These leaders rose to the challenge. Over the next three days, the participants listened to speakers who served as SMEs or inspired them to think about how they can change the Army. 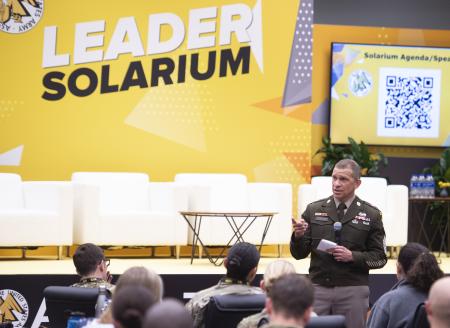 On the second day the leaders went to the National Mall and listened to leadership lessons from the past to help inspire the future. For lunch that day, the Secretary of the Army, 11 Major Generals (mostly division commanders), 10 CSM, 2 Brigadier Generals, 1 COL (P) and 1 COL to talk to these leaders about their recommendations. These young leaders spent more than 7 hours of table time working as groups and when that wasn’t enough, they went back to their hotels and worked into the night so that they did not squander this opportunity. When GEN McConville and SMA Grinston came back on day three, the groups were ready to present their elevator pitches or 5-minute recommendations. Just a few moments earlier, they’d presented their recommendations to the group and the group voted on which recommendations the Chief and SMA should hear first, in case they didn’t have time to finish. The CSA and SMA engaged for 2 hours listening and having dialogue with these leaders over their recommendations. Halfway through the recommendations and 10 mins to the 2-hour mark, we tried to close out the Solarium, since the CSA and SMA were on a tight time crunch. We thanked the CSA and SMA for their time and asked them to give closing remarks. Both the Chief and the SMA said “No, we will stay to hear every one of these recommendations.” We could not be prouder of these leaders who, in just 72 hours, set the course to make amazing changes in the Army.

The recommendations are now in the hands of MG Norrie and his outstanding team at the Army’s People First Task Force. The Army’s People First Taskforce is now staffing the recommendations for action and leaders will soon learn what is in the realm of possibility when Senior Leaders offer the opportunity to collect bottom-up feedback. That was the impact they had; that was the power of this program.

Check out all photos from the event here!