This Article is in Honor of Martin Luther King Day, Camp Saxton, and the Emancipation Proclamation

This Article is in Honor of Martin Luther King Day, Camp Saxton, and the Emancipation Proclamation

When the Civil War started in 1861, Rufus Saxton was in command of an artillery detachment at the St. Louis Arsenal. He was appointed Brigadier General of U.S. Volunteers as of April 15, 1862 and commanded the defenses of Harpers Ferry in May and June during General Thomas J. "Stonewall" Jackson's Shenandoah Campaign. Under his direction Harpers Ferry was successfully defended by the use of railroad transportation and naval and army artillery. 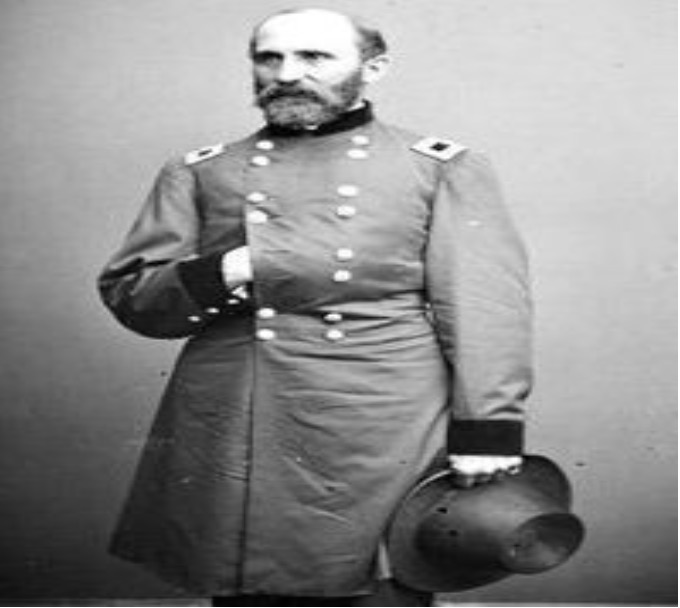 For the remainder of the Civil War, Saxton served at various locations in the South with numerous titles. His principal occupation was the enlistment and organization of ex-slaves into the Federal Army. General Sherman issued Special Order, No. 15 (Forty Acres and a Mule) on January 16, 1865. Brig. Gen. Rufus Saxton was put in charge of implementing the orders.

Near the end of the war, he became acting Assistant Commissioner for the States of South Carolina, Georgia and Florida in the newly created Freedman's Bureau. The Bureau was established by an Act of Congress on March 3, 1865. The Charleston Daily Courier reported that Major General Saxton arrived in town Saturday, March 20, 1865 and has established his Headquarters at the Alston House, No. 11 East Battery (currently No. 21 East Battery.)

Camp Saxton (named for General Rufus Saxton) was occupied by the Union Army from early November 1862 to late January 1863. It was the home of the 1st South Carolina Volunteers; the first black regiment mustered into regular service in the United States Army during the Civil War. 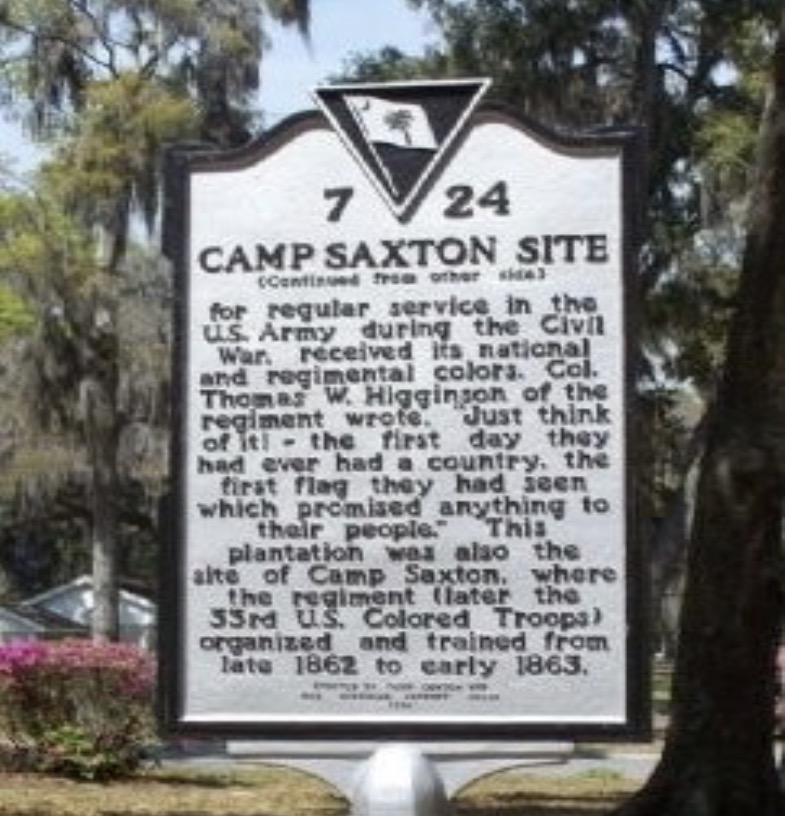 Throughout the summer of 1862 President Lincoln carefully considered the inclusion of blacks in the Union war effort, both in terms of the effect their emancipation could have on the Confederacy and in terms of the work they could perform as laborers and even soldiers in the U.S. Army. By August he was ready to implement a policy permitting his generals to use all the means at their disposal, including readily available black manpower, to help preserve the Union. (NRHP- Camp Saxton)

On August 22nd Secretary of War Edwin M. Stanton authorized Rufus Saxton to “arm, equip, and receive into the service of the United States such volunteers of African descent as you may deem expedient, not exceeding 5,000.” (Kytle)

The Emancipation Proclamation, or Proclamation 95, was a presidential proclamation and executive order issued by United States President Abraham Lincoln on September 22, 1862. The Proclamation read:


That on the first day of January in the year of our Lord, one thousand eight hundred and sixty-three, all persons held as slaves within any State, or designated part of a State, the people whereof shall then be in rebellion against the United States shall be then, thenceforward, and forever free; and the executive government of the United States, including the military and naval authority thereof, will recognize and maintain the freedom of such persons, and will do no act or acts to repress such persons, or any of them, in any efforts they may make for their actual freedom.

Camp Saxton was the site of the elaborate ceremonies held on New Year’s Day 1863 which formally announced and celebrated the enactment of the Emancipation Proclamation freeing all slaves in areas then “in rebellion” against the United States.  “For Emancipation Day, the U.S. Army had brought in great stores of molasses, hard bread, tobacco, and sweetened water, plus a barbeque of a dozen oxen, each standing whole and roasting in its pit.

A speakers’ platform had been erected, and companies of the First South Carolina Volunteers stood or sat in a circle around it. The platform was reserved for distinguished speakers, officers and other soldiers, a military band, and the lady missionaries in attendance.

The celebration began with prayers, recited poetry, hymns, and speeches. The crowd of several thousand, sprinkled with whites but the majority black, waited for a moment they had so long dreamed of.

Finally, President Lincoln’s proclamation was read aloud and “enthusiastically cheered,” Forten recalled. The proclamation called for black volunteers to join the U.S. Army or Navy. About 200,000 black men would serve in the Union military by the end of the war.” (COASTAL HERITAGE MAGAZINE)

This is believed to be the first reading of the Emancipation Proclamation in South Carolina. 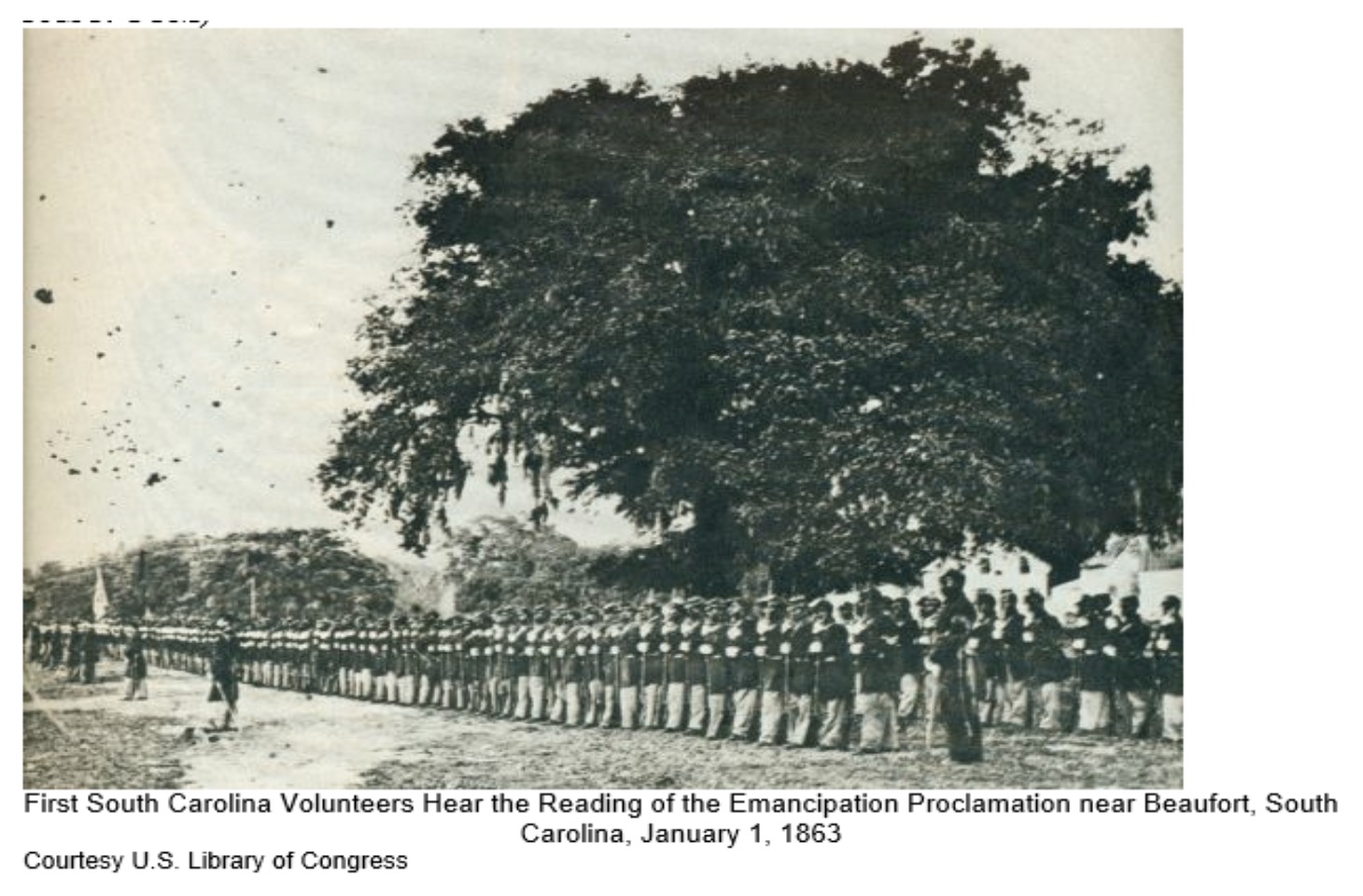 The Camp Saxton Site is an approximately six-acre wooded and greenspace site, bounded on the east by the Beaufort River, on the west by the complex at the United States Naval Hospital Beaufort, on the north by the boat basin off the Beaufort River and on the south by the ruins of Fort Frederick. Listed in the National Register February 2, 1995.

-Emancipation Among Black Troops in South Carolina; Posted on November 6, 2012 by Matthew Pinsker