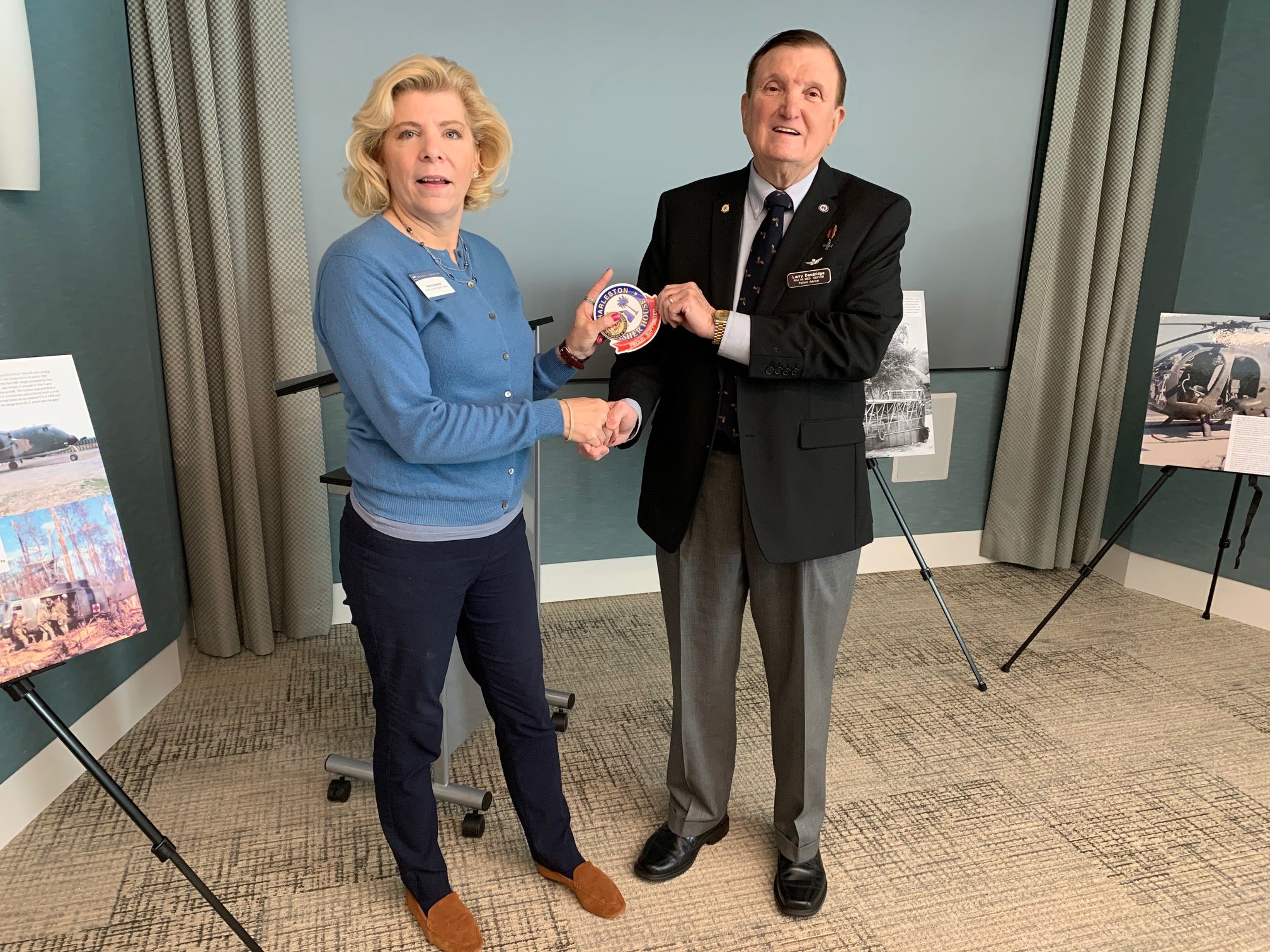 Merrill Gardens at Carolina Park Luxury Senior Community located at 3501 Merrill Place, Mt. Pleasant, SC invited the Fisher House Charleston Volunteer Ambassador of Goodwill and Military History Author W. Larry Dandridge to speak to and do a book signing on January 9, 2020.   This event was in support of the Ralph H. Johnson VA Medical Center’s Fisher House Charleston.  Several WWII Veterans and their spouses and others attended the speech.

Larry Dandridge is a volunteer Patient Adviser and Member of the CEO’s Veterans Service Officer (VSO) Advisory Council at the Ralph H. Johnson VA Medical Center in Charleston, the Vice President for Veteran Affairs for the Charleston Chapter of the Association of the US Army (AUSA), and the CEO of Tigers, Vikings, and Vipers Publishing Company.  Larry is also a member of the Association of the US Army (AUSA), the Military Officers Association (MOAA), the Army Aviation Association of America (AAAA), the Veterans of Foreign Wars (VFW), the Vietnam Helicopter Pilots Association (VHPA), American Legion, Purple Heart Society, and many other patriotic organizations.  Nancy Dezzuti, is the Activities Director at Merrill Gardens and was the master of ceremonies for this interesting event.

Larry talked about the RHJ VA Medical Center and its clinics in Myrtle Beach, Trident/Ladson, Goose Creek, Beaufort, Savannah, and Hinesville, GA and he encouraged all veterans to take advantage of their VA benefits.  Among the many things Larry mentioned were that over two thirds of all Vietnam Veterans are already deceased. He also told the audience that three out of every four military age young persons in this country are not eligible to serve in the military due to either being overweight, cannot meet physical standards, have drugs in their blood, do not have the required education, or have criminal records.

The author of BLADES OF THUNDER Book One also told the attendees that there are about 20 million veterans alive today and only about half of them take advantage of their VA (federal) and state veterans’ benefits.  The speaker encouraged all Veterans (especially seniors) to take advantage of the Library of Congress’ VETERANS HISTORY PROJECT, which interviews veterans and puts those interviews online and in the Library of Congress for all to see and learn about the great sacrifices that Veterans and their families make for our great nation.  Go to http://www.loc.gov/vets/ to learn all about the Vets History Project.

Larry also mentioned in his talk that the war produced over 10,000 amputees; Army pilots flew an average of 12 sorties per day and flew from 1200 to 1400 hours in one year in Vietnam; the Huey flew over 7.5 million hours in Vietnam; Dust Off (medical Evacuation) helicopters flew more than 500 thousand missions; and over 90% of the wounded in Vietnam were saved due the speed of the helicopter getting the wounded to major medical care within one hour (called the golden hour) of them being wounded or injured.

Larry also mentioned that four LowCountry SC men are main characters in BLADES OF THUNDER (Book One) and all are still living in the LowCountry.  Those main characters from SC who are in the book are ex-Army Aviation Wounded Warrior and Captain Laurie (Bubba) Segrest and Army Aviation Colonel Retired Sam DeLoach of Charleston, Army Brigadier General Retired Dan Hickman of Hickman’s Corner, NC, and Larry Dandridge.  A major theme of his speech was that the families (spouses, children, parents, brothers, and sisters) of service men and women are the real heroes of our Armed Forces.  Larry also mentioned the tragedy that of the approximate 20 veterans who commit succeed every day, 14 of them had never sought mental health and other help from the VA.

Larry told the attendees that his paperback and hardcover, all five-star reviewed, military history, and action book, BLADES OF THUNDER (Book One) is about the Helicopter War in Vietnam in 1968 and 1969, which were the two bloodiest years of America’s longest and most controversial war. Larry’s speeches and book sales have raised more than $68,000.00 for Fisher House Charleston and have served as a catyst in raising the over $5.5 million dollars in donations made to support Fisher House Charleston.  The book is also about six young Army helicopter pilots and green officers, all under 21 years old, arrive in Vietnam, where they each become men, highly skilled pilots, and proficient officers within a few months. None of those young officers would be the same after Vietnam and all were wounded and one was killed-in-action.

He mentioned that the Friends of Fisher House Charleston was led and established by Trux and Durbin Emerson and that fantastic charitable organization has raised more than $5.5 million dollars, which were used to buy the land for $4.5 million that our magnificent Fisher House was built on and to support day-to-day operations of this gorgeous free lodging for the families of the inpatients in the RHJ VA Med Center.  Larry also explained that the LowCountry of SC and GA are so fortunate to have the Ralph H. Johnson VA Medical Center, the VA’s Flagship Medical Center, in Charleston. That great VA Center has been in the top 10% of all public and private hospitals in the USA for quality of care, customer satisfaction, infection prevention, low employee turn-over, and much more for many years now.

Larry provided the following additional information to the attendees on how to volunteer and donate to Fisher House Charleston and the RHJ VA Med Center.

The attached picture shows Larry Dandridge presenting a Fisher House Charleston coin, blazer patch, and supporter magnet to  the Summerville Rotary Club President Jimmy Jackson and the Clubs Activities Director Mike Bogart. Dandridge is the middle with Mike Bogart on the left and Jimmy Jackson on the right in the picture.

Larry has spoken to over 150 patriotic and civic minded originations in the past two years, including many Rotary Clubs, History Clubs, Exchange Clubs, Kiwanis Clubs, Daughters of the American Revolution (DAR) Chapters, Military Order of World Wars (MOWW) Chapters, Lions Clubs, American Legion Posts, the American Red Cross, Military Officers Association (MOAA) Chapters, Retirement Centers, Army Aviation Association of America (AAAA) Chapters, Knights of Columbus Posts, Association of the US Army (AUSA) Chapters, Vietnam Veterans of America (VVA) Chapters, Colleges, and businesses. Larry has also given speeches for Boeing, Blue Cross Blue Shield of SC, QinetiQ North America Inc., Westar Aerospace and Defense Group, several Houses of Worship, and other such organizations.  If you would like to invite Larry Dandridge to speak and do a book signing (meet-the-author event), email Larry at [email protected] or call him at 843-276-7164.