William Washington was the eldest son of Baily Washington of Stafford County, Virginia, where he was born on February 28, 1752. He was a second cousin of George Washington. He was educated for the Church, but the peculiar position of public affairs led him into the political field. He early espoused the patriot cause and entered the army under Colonel (later general) Hugh Mercer as a captain.

Washington was in the battle near Brooklyn, Long Island, distinguished himself at Trenton, and at Princeton. He was afterward a major in Colonel Baylor's corps of cavalry, and was with that officer when attacked by General Grey at Tappan in 1778. The following year, he joined the army under Lincoln in South Carolina and was very active in command of a light corps in the neighborhood of Charlestown. 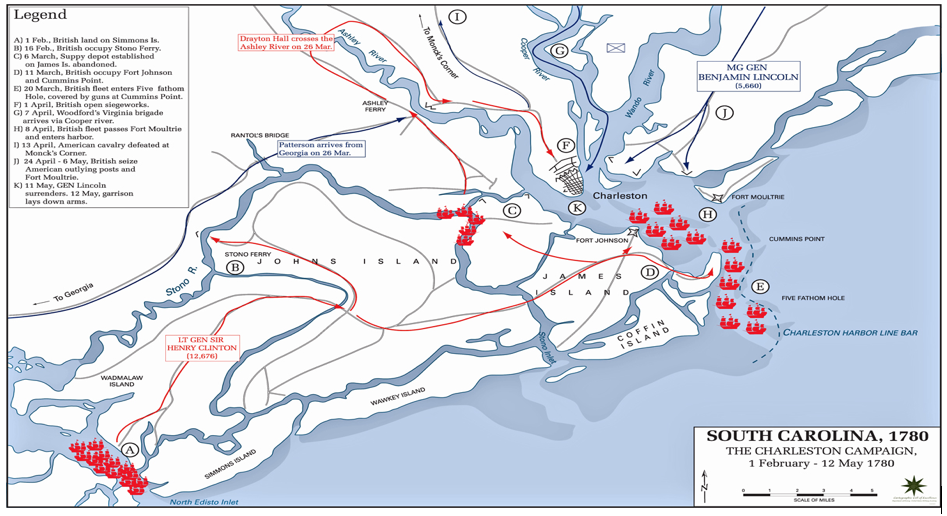 Sir Henry Clinton evacuated Newport, Rhode Island in October 1779, and left the substantial garrison of New York City. In December, 1779, Clinton and his second in command Charles Cornwallis, sailed southward with 8,500 troops and 5,000 sailors on 90 troopships and 14 warships. After a very stormy voyage, the fleet anchored in the Savannah River on 1 February 1780. By 12 February, Clinton had landed his army 30 miles south of Charleston on Simmons Island (today’s Seabrook Island). By 24 February, the British had crossed the Stono River onto James Island, and by 10 March, Lord Cornwallis had made it to the mainland. By 22 March, they had advanced to Drayton Hall (the British ransacked both Middleton Place and Drayton Hall) and on 29 March 1780, crossed the Ashley River.

Cutting the city off from relief, Clinton began a siege on 1 April, 800 yards from the American fortifications located at today's Marion Square. In order to consolidate British control of the immediate area, his troops captured Monck's Corner on 14 April. On 18 April, Lt. Col. Lord Rawdon arrived with 2,500 men. Charleston was completely surrounded by the British.

On 7 May, Fort Moultrie surrendered without a fight. On May 8, Clinton called for Lincoln's unconditional surrender, but Lincoln attempted to negotiate for the honors of war. Clinton refused.  On May 12, Lincoln formally surrendered 3,371 men to the British.

When the British reinforcements arrived in the vicinity of Charleston in late March 1780, Sir Henry Clinton made a special trip from James Island to pay them a visit. The Americans, having learned of Clinton's whereabouts, set in motion a plan to capture the British commander-in-chief. They left Bacon’s Bridge – a heavily fortified position on the Ashley River near Colonial Dorchester State Historic Site; and traveled 12 miles toward the British lines. Unfortunately, it was one day late. The objective was Governor John Rutledge's plantation house, located near Rantowles Bridge. Colonel William Washington surrounded the place on March 27 with 300 light horse (consisting of Lt. Col. William Washington's 3rd Continental Light Dragoons, the 1st Continental Light Dragoons under Lt. Col. Anthony White, Pulaski's Legion Cavalry under Major Pierre-François Vernier, and probably as well Col. Daniel Horry’s South Carolina Light Horse Regiment). The Americans did not succeed in surprising Clinton, who had already returned to his headquarters, but Washington routed a British force of 200 to 300 (British Legion Cavalry,17th Light Dragoons and Royal NC Regiment.) He also captured Lieutenant Colonel John Hamilton of the North Carolina Loyalists.

As they were returning to Bacon's Bridge, Lt. Col. Washington learned that a British force, commanded by Lt. Col. Banister Tarleton, was approaching their rear. The Patriots turned around and charged the British. As the fighting started, Lt. Col. Tarleton realized that this would become a disaster for the British. He ordered his troops to retreat back across the causeway, but eight dragoons were captured.

This is memorable as the first encounter between the troops of those two famous opponents. The actual fighting took place some distance from Rantowles Bridge, but that landmark is the most convenient for locating the battle. Rantowles Bridge could correspond with the present U. S. 17 highway bridge over Rantowle’s Creek, not far from William Washington's burial place. The plantation was about a mile east of the bridge.

Rest of the Story:

Washington and Tarleton would meet numerous times. At the Battle of Cowpens Washington was instrumental in the major defeat of the British Army. “Finally, Tarleton, himself, saw the futility of continued battle, and with a handful of his men, fled from whence he came, down the Green River Road. In one of the most dramatic moments of the battle, William Washington, racing ahead of his cavalry, dueled hand-to-hand with Tarleton and two of his officers. Washington's life was saved only when his young bugler fired his pistol at an Englishman with raised saber. Tarleton and his remaining forces galloped away to Cornwallis' camp. Stragglers from the battle were overtaken, but Tarleton escaped to tell the awful news to Cornwallis.” (National Park Service – Battle of Cowpens)

During their surrender at Charleston, the American forces were denied honors of war, leading General George Washington to deny the same to the British during their surrender at the Siege of Yorktown. Washington said, "The same Honors will be granted to the Surrendering Army as were granted to the Garrison of Charles Town. Cornwallis refused to attend the surrender ceremony, citing illness. Instead, Brigadier General Charles O'Hara led the British army onto the field. O'Hara first attempted to surrender to Rochambeau, who shook his head and pointed to Washington. O'Hara then offered his sword to Washington, who also refused and motioned to Benjamin Lincoln. The surrender finally took place when Washington's second-in-command accepted the sword of Cornwallis' deputy.