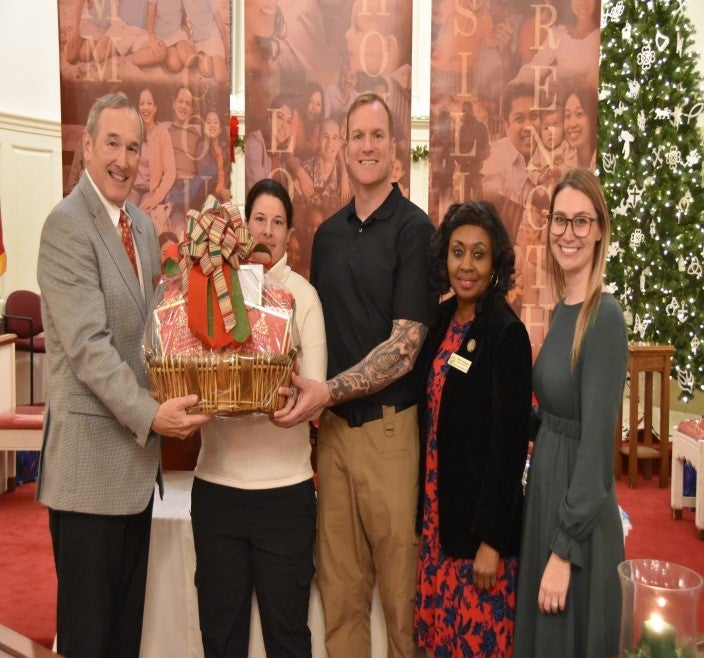 The Braxton Bragg Chapter, Association of the United States Army, was honored to help sponsor and attend the 2022 Fort Bragg, N.C. Family of the Year ceremony on December 1, 2022.  Each year Army Community Service accepts nomination packets from units for the Family of the Year program. There were 25 phenomenal families nominated from units across Fort Bragg. This year, each family was asked to choose one word that describes their family's commitment to the Army and their country.

1SG Christopher G. Burlee, 122nd Aviation Support Battalion 82d Airborne Division, his spouse MAJ Sarah A. Burlee, 1st Special Forces Command, along with their two daughters won the Fort Bragg 2022 Family of the Year.  Commitment was the word the dual military Burlee family chose, stating that they understand that the military lifestyle isn't for everyone, very difficult for one much less two, doing this for almost 16 years as a married couple.

MG(R) Al Aycock, Chapter President, and SGM(R) Shirley Draughn, Executive Vice President of the Braxton Bragg Chapter, presented the new Family of the Year with a gift basket full of goodies for this time of the year and a gift card for the family.  Mrs. Tawni Dixon, Vice President of Family Programs and past FOY, coordinated the gifts and attended the ceremony. The President talked with the family about accepting the nomination for the Bragg AUSA FOY.

This video link from ABC News includes the Braxton Bragg Chapter presenting gifts to the FOY: