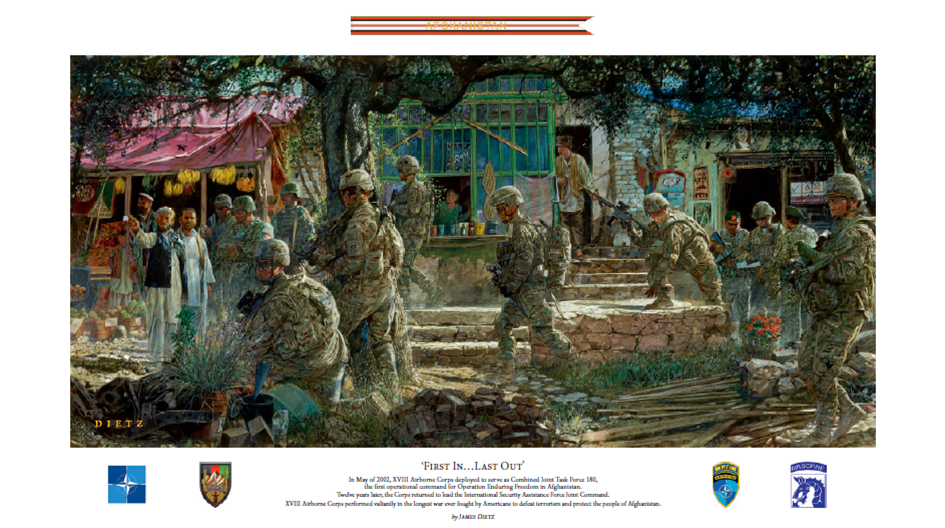 Flyer About the Print & Order Form

The United States Army's XVIII Airborne Corps is one of the most storied organizations in our nation's history. The Corps' illustrious career began with its vital role in liberating Europe from Nazi tyranny during the Second World War. The ensuing decades would see America's Contingency Corps answer the call to restore peace and freedom in the Dominican Republic, Grenada, Panama, Kuwait, Iraq, and Haiti. When the harrowing events of September 11th, 2001 drew our nation and its allies into the global war against terrorism, the Sky Dragons added a new chapter to their illustrious history.

As the coalition launched Operation ENDURING FREEDOM in 2001 and 2002, the initial challenges of this new kind of war made it evident that an operational headquarters was required to coordinate the coalition and joint capabilities working to defeat al-Qaeda and free Afghanistan of the scourge of the Taliban. In May of 2002, XVIII Airborne Corps, under the command of Lieutenant General Daniel K. McNeill, was the first organization to serve as the core of this headquarters, Combined Joint Task Force 180. The Dragon Soldiers of CJTF-180 oversaw the campaign against the remnants of al-Qaeda and the Taliban in the mountains on Afghanistan's southern and eastern frontiers.

Twelve years later, the Corps returned as the heart of the International Security Assistance Force Joint Command, the NATO operational headquarters in theater. Under the leadership of Lieutenant General Joseph Anderson, XVIII Airborne Corps and the rest of IJC worked with their Afghan partners during a decisive period in the conflict. In addition to supporting the Afghan National Security Forces in their successful efforts to rovide security during the Afghans' historic 2014 presidential election, the IJC headquarters oversaw the final coalition effort to fully transition security responsibility for Afghanistan to the ANSF. In December 2014, the XVIII Airborne Corps cased the IJC colors as the coalition's combat mission in Afghanistan drew to a close.  In its role as the heart of CJTF-180 and the ISAF Joint Command, XVIII Airborne Corps was first in and last out in the longest war ever fought by Americans. The paratroopers, Afghan Soldiers, and police of First In, Last Out all symbolize the ISAF Joint Command's transition of security responsibility to its Afghan partners after thirteen long years of combat, demonstrating our nation's enduring commitment to the people of Afghanistan.

$100 for Print, plus $20 for shipping and handling - local pickup can be arranged through [email protected]