Financial security among military families is one of the top issues addressed in the 2017 Blue Star Families Survey. Ranked second most important among active-duty service members and third among active-duty spouses, “Military Pay & Benefits” has been a top issue of concern for years.

Pay and benefits are a huge part of retention, and extend beyond the bimonthly paycheck. From the housing allowance to health insurance, military families rely on their service member’s branch to take care of their family’s needs. This survey shows that families feel the military is falling short of expectations in several key areas. 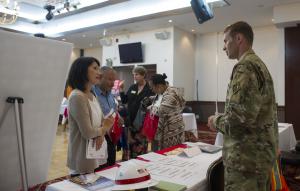 One large contributor to the financial health of a military family is the spouse’s employment options. With less than half (48 percent) of military spouses employed, there is a clear disconnect between the organizations promoting military spouse employment and the challenges it brings. Everything from taking the bar exam in a new state to finding reliable and affordable child care affects the military spouse’s opportunity for employment. 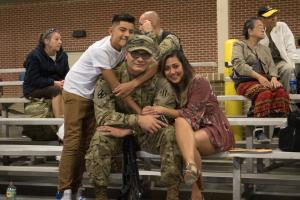 The drawdown a few years ago forced everyone in the military to nsider the possibility of not completing their 20 years or their current term. Focus shifted in family service centers to financial security and the idea of saving in case something happened. Unfortunately, most military families find themselves unable to set aside any extra money because they are not making ends meet on one income, or they are drowning in debt.

The average American household has $16,000 in credit card debt, and military families are no exception. The scariest part is that 49 percent of military families have less than $5,000 in available savings. An error on the part of finance or a move that isn’t reimbursed in a timely manner can set military families back even further on their journey to financial security.

Overall, military families are happy with their service, with 72 percent of service members and 77 percent of military spouses reporting that they are satisfied with military life. But they are aware of the challenges they will soon be facing in regard to transition, fitting in with their civilian communities, and the effects the military lifestyle has on their children. If changes or cuts to benefits and services continue, a small but mighty 17 percent are prepared to leave service earlier than planned.