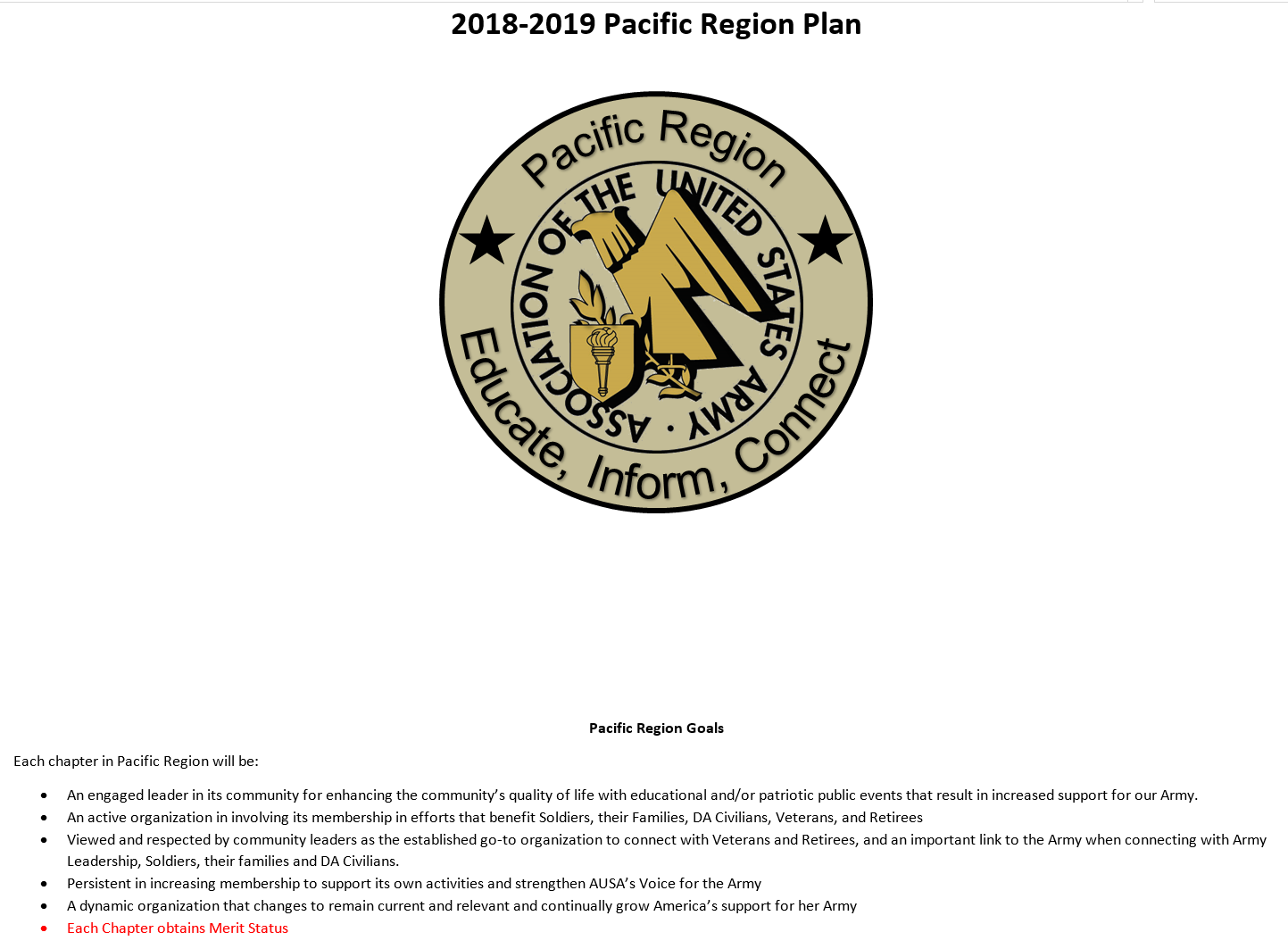 Each chapter in Pacific Region will be:

·        An engaged leader in its community for enhancing the community’s quality of life with educational and/or patriotic public events that result in increased support for our Army.

·        An active organization in involving its membership in efforts that benefit Soldiers, their Families, DA Civilians, Veterans, and Retirees

·        Viewed and respected by community leaders as the established go-to organization to connect with Veterans and Retirees, and an important link to the Army when connecting with Army Leadership, Soldiers, their families and DA Civilians.

·        Development of a strategy by each Chapter to attain (and/or sustain) the goals stated above.  Measurement:  Statement of goals and objectives in each chapter’s Annual Plan submitted for 2019-2020.

·        Recruitment, retention, and involvement of chapter board members and new volunteers to support the goals.  Measurement:  Each chapter has identified a successor to the Chapter President and passes responsibility to that new president in accordance with its By-Laws. Each chapter has recruited board members and volunteers, and assigned responsibilities to them, to achieve the goals/objective defined in its strategy and documented in its 2020-2021 Annual Plan.

·        Increased community involvement and leadership.  Measurement:  Each chapter has earned one new streamer from the following list:  Community Partner Support, Communicating with Members, Family Programs, Soldier for Life, Volunteer Development.  For chapters who have earned a significant number of these streamers already, evidence that an event reached more of the public, involved more volunteers, or reached more members than the year before.

·        Increased support to Soldiers, their families, DA Civilians, Veterans, Retirees, J/ROTC, and/or future Soldiers.  Measurement:  Each chapter has earned one new streamer from the following list:  Young Professional, J/ROTC Support, Support to Recruiting Command.  For chapters who have earned a significant number of these streamers already, evidence that an event reached more of the intended audience than the year before.

·        Increased membership.  Measurement:  Each chapter has more members at the end of the year than at the beginning of the year.

·        Increased status of the chapter in the community.  Measurement:  New involvement of representatives from Army, city government, chamber of commerce, or other similar organizations in chapter board meetings or planning of joint events with these organizations.  For those chapters with significant involvement already, increased contact with Army leaders, CASAs, Reserve Ambassadors, influential business leaders, and/or legislators. Join a local Chamber of Commerce, or equivalent like organization, earn Take the Hill Streamer.

The purpose of the Regional organization, as stated in the Chapter Operations Manual is to improve coordination, to enhance leadership in the Chapters, and to provide assistance to the Chapters in implementing programs and projects which support the Army, its soldiers, civilians and their families.  The following are focus areas for the Pacific Region President effort in 2018-2019.

·        Facilitate, involve other facilitators, or encourage chapter presidents to facilitate establishment of a multi-year strategy to better their chapter and their support of our Army

·        Assist chapter presidents in building their boards and volunteers by offering suggestions, connecting with members, or making local visits or calls requested by the Chapter President to ask for participation on boards

·        Help to motivate boards during visits to chapters

·        Encourage chapter presidents to identify the legacy they’d like to leave, and assist them in taking steps to achieve it

·        Plan Pacific Region meeting with the host chapter.  Include leadership topics in the business meetings

·        With other region presidents, provide training to chapter presidents at AUSA’s Annual Meeting

·        Assist individuals as requested by chapters

·        Connect AUSA National Advisory Board members with chapters in the region

·        Meet with chapter leaders at Annual Meeting for communication and feedback

·        With the host chapter, provide  activities where  chapter leaders can socialize and establish relationships that will improve communication and exchange  of ideas

·        Initiate a forum for chapter leaders (other than chapter presidents) to communicate between chapters.  (For example, connect VPs of Membership of different chapters)

·        In the absence of a chapter’s passion to identify and pursue specific new activities, encourage  chapters to pursue one or  more of the following activities:

o   Activities that inform and educate the public, and in turn generate public support of our Army.  Education and information of the public differentiates AUSA from many other MSOs.

o   Professional development activities that benefit Soldiers, DA Civilians, and Contractors, and of interest to Veterans and Retirees.  An example is streaming of an AUSA Hot Topic event held at AUSA’s National Headquarters.  With the cooperation of business providing a meeting space, a good internet connection, a computer, projector (and some pre-testing of the IT), and some publicity, excellent professional development sessions can be presented by any chapter.

o   Activities that affect our future Army.  Examples include

§  Award presentations to J/ROTC. This not only affects our future Army, but can involve a good number of volunteers, some of whom may be in more remote areas of a chapter footprint.

§  Regular visits from chapter volunteers to US Army recruiting centers. This is also a good way to engage several new volunteers.  Chapter volunteers can help Recruiters who are new to the community, and often away from Army infrastructure, make connections with principals, coaches, and influencers.

§  Young Professional events.  Chapters often are rich with members who can serve as mentors to young Soldiers and businessmen/women.  YPs are often interested in finding mentors, as well as “rubbing elbows” or having a beer with many of the influential people in a chapter’s memberships.

§  Our Community Salutes events.  While these events require more significant resources, the “Our Community Salutes” organization is willing to assist chapters with planning and raising funds for these events that honor young men and women who have decided to enlist in any of our Armed Services.  These events may also be successful in large cities where there is no Army installation since they will draw graduates, parents, and those that support them from all over the city.

§  Events that introduce Army values and promote fitness among teenagers.  Lack of fitness is one major reason that disqualifies many of our country’s youth from Army service.

o   Events that connect members and keep them engaged with AUSA.  An example is a cake cutting ceremony (or larger event) that commemorates the Army, National Guard, or Army Reserve birthday.  An extremely easy example would be to gather members to watch the Army/Navy Game at a sports bar.

Assist in the development of new chapters

o   Work with state and chapter presidents to identify new cities, colleges, or other organizations that can support a new chapter or subchapter and create new chapters in those locations

o   Work with state and chapter presidents to ensure that  newly created chapters and subchapters receive training and guidance, especially in building their boards to ensure growth and continuity