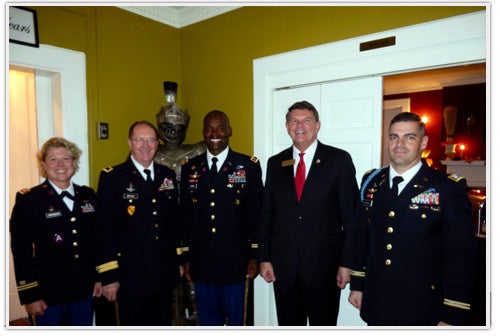 On 27 October 2015, the First Region AUSA Northern New Jersey Chapter held the first of a series of events commemorating the centennial of Rutgers University’s Scarlet Knight Battalion ROTC. The ROTC Muster celebrated the unit’s century of service to Rutgers University, the United States of America, and America’s Army — Active, Guard and Reserve.

The evening began with the presentation of the COL Stan Lapidow Scholarship to Cadet Battalion Commander Lauren McGettrick. She was chosen for her outstanding academic and leadership achievements during the past year.

Mr. Ray Geary and the Rutgers Head Football Coach Kyle Flood were given AUSA Distinguished Service Awards for their continued service to cadets and their efforts to support our Armed Forces.

Among the keynote speakers for the evening was LTG Guy Swan (USA-Ret), Vice President for Education for AUSA. LTG Swan stressed the vital role that the cadets of the Scarlet Knight Battalion play as they become the next generation of Army leaders.

Another highlight of the evening were remarks by Professor of Military Science MAJ Al Boone and Cadet McGettrik on how the ROTC helps transform cadets from students to leaders. Their perspectives were reinforced by the many individual and moving stories shared by the cadets who participated in the Muster.

The Northern NJ Chapter of AUSA will continue to focus on the ROTC’s centennial as to further recognize the dedication and service of the young professionals destined to become our next greatest generation of heroes.