Col. Harry G. Summers Jr. begins his book, On Strategy: The Vietnam War in Context, by relaying the following conversation: “‘You know you never defeated us on the battlefield,’ said the American colonel. The North Vietnamese colonel pondered this remark a moment. ‘That may be so,’ he replied, ‘but it is also irrelevant.’”

As much as we may not want to admit it, in this sense, our current war against al Qaeda and their ilk resembles that of Vietnam. In fighting our post-9/11 wars, we have won nearly every battle but are far from winning the war. How can this be? The answer lies largely in the civil-military nexus that underpins how America wages war.

Waging war involves selecting proper war aims; identifying initial military, nonmilitary, U.S. and coalition forces, strategies, policies and campaigns that, if successfully executed, will achieve those aims; constructing execution mechanisms and coordinative bodies to translate the plans into action and then to adapt as the war unfolds; and maintaining the war’s legitimacy from start to finish. These war-waging responsibilities are civil-military responsibilities shared by the set of senior political leaders of the executive and legislative branches and selected senior military leaders. Even a cursory look at these elements reveals that our war-waging proficiency has simply not been up to the task.

Selecting proper war aims. The aims of the George W. Bush administration’s war on terror—against nations, organizations and people who perpetrated the 9/11 attacks and those who harbored them—were expansive and unachieved. Our haste to respond to the 9/11 attacks, while viscerally understandable, did not allow sufficient dialogue on whether these aims could actually be achieved or about the resources that would be necessary to achieve them. There is evidence that some officials did not even want such a dialogue.

In 2009, the Obama administration altered the aims, vowing to “disrupt, dismantle and defeat” al Qaeda in Afghanistan and Pakistan and prevent its capacity to threaten America and our allies in the future. These aims were equally expansive and unachievable. The reality is that the U.S. alone cannot achieve success against al Qaeda, the Islamic State and other radical jihadi groups. A real coalition has to be formed, and the U.S. must lead it. In response to the threat in Syria and Iraq, the U.S. has moved a step in the right direction, but the coalition we are forming must become more than a multinational posse following the U.S. sheriff in pursuit of the bad guys.

Identifying initial military, nonmilitary, U.S. and coalition forces, strategies, policies and campaigns that, if successfully executed, will achieve those aims. America’s initial strategy of removing regimes and then dealing with the aftermath has morphed into withdrawing and conducting protracted decapitation strikes against selected terrorist leaders. Both approaches are overmilitarized. Both treat coalition partners as a multinational posse. Finally, both reveal a yet-to-be-resolved ambiguity that has plagued our efforts from the start: Are we waging a war, fighting criminals or doing some hybrid of the two?

By overmilitarizing the problem, the U.S. has never created sufficient capacity in the nonmilitary elements of power, nor have we adequately synchronized military and nonmilitary actions. We have not properly analyzed what it actually takes to successfully wage a protracted global war against the kind of enemy we face. Perhaps we just don’t want to acknowledge that we’re in this kind of war. Hence, we initially fought the war with the armed forces we had on hand rather than create what is needed. We expanded some elements slightly but not enough to handle combat in two major theaters of war, fight the broader global war against al Qaeda and other radical jihadis, and meet other security obligations. Now, the approach seems to be to define the problem in such a way that the answer results in the U.S. relying on lethal and remote air strikes, small special operations raids, or training partners and surrogates. These are necessary, but one look around the globe should convince anyone that they are not sufficient.

With respect to the nonmilitary elements of power, we again used what was on hand with existent policies rather than creating what was needed. What we need is a set of adequately resourced and integrated civil-military campaigns, but these have been the exception, not the rule.

In sum, our ways and means—military, nonmilitary, U.S. and coalition forces, strategies, policies and campaigns—have not been properly aligned with aims or with reality.

Constructing execution mechanisms and coordinative bodies to translate the plans into action and then adapt as the war unfolds. We have never created adequate coordinative bodies to integrate the actions of the numerous separate U.S. departments and agencies that have had a part in this war. This is clear from a number of recent books, not the least of which are the two recently written by former Secretaries of Defense Robert M. Gates and Leon E. Panetta. The result: Plans and execution have been more often cacophonous than harmonic. We have also never created the necessary coalition coordinative bodies. In some cases, military headquarters have coordinated the military dimensions of coalition action, but the nonmilitary actions or the broader political dimensions have been left more fallow than cultivated. In general, the American approach to waging war has been to rely foolishly upon existing bureaucratic organizations and processes and upon posses, not functional coalitions.

We have yet to realize what Robert W. Komer pointed out in his post-Vietnam War study published by the RAND Corporation, Bureaucracy Does Its Thing; that is, all bureaucracies inevitably tend toward doing the familiar. Waging war is not what U.S. bureaucracies do routinely. If bureaucracies adapt at all, Komer points out, they do so too slowly to match the speed of war.

The study shows that during the Vietnam War, “there was little top-level follow through or adequate management machinery to force [the governmental bureaucracies] into different patterns of response. … [A]s a result, much of what we did turned out to be futile, wasted, and even irrelevant.” Writing over 40 years after Komer, Gates writes throughout his book, Duty: Memoirs of a Secretary at War, about how frustratingly common “business as usual” was both in the Pentagon and around Washington, D.C.

Translating war-waging force structure, strategy, policy and campaign decisions into actions with even a modicum of coherence requires proper coordinative bodies and mechanisms, as does adapting initial decisions and actions as a war unfolds. Waging war without such bodies and mechanisms usually results in feckless execution that dissipates focus and protracts war. 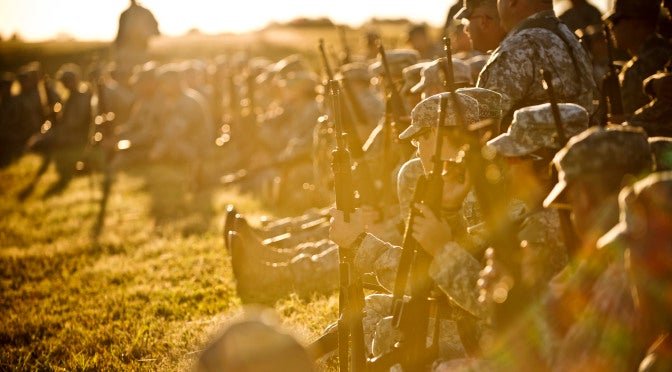 Maintaining the war’s legitimacy from start to finish. Sustaining popular support for a prolonged war is inherently difficult for democratic governments. Peter D. Feaver, Jason Reigler and Christopher Gelpi demonstrated in their 2006 study, “Success Matters: Casualty Sensitivity and the War in Iraq,” that three conditions are necessary to create and sustain legitimacy: The population perceives that the war is justified, its aims are achievable, and progress is being made toward achieving those aims. When these three conditions are met, the authors show that casualties are viewed as worth it and the war retains popular legitimacy. Unfortunately, the past decade-plus of war has seen these conditions more often not met than met. All three conditions are related to war-waging capacity, which in turn depends upon the proficiency of and relationship among the senior political (executive and legislative) and military leaders co-responsible for waging war.

And co-responsible is the right term. While senior political leaders retain final decision authority in every war-waging category, the quality of those decisions is based upon the input they receive from civil and military subordinates and the robustness of the dialogue those leaders have among themselves leading up to those decisions. Skew the input or shortchange the dialogue, and the decision quality suffers. Believe, falsely, that there is a sharp distinction between policy and execution that leads to strong civil-military role differentiation, and the dialogue, decision and adaptation quality suffers. Have inept or no civil-military coordinative bodies and adaptive mechanisms in place, and again, the execution quality suffers. Use the war to make partisan political points rather than to create bipartisan war-waging coherence, and decision, execution and adaptation all suffer.

Almost 15 years into our post-9/11 wars demonstrates that the U.S.’s war-waging capacity is suffering. America is too focused on winning battles. This is a tactical focus. No one wants to lose battles, but winning them while losing the war is far more odious. Perhaps there is an opportunity—in the renewed discussion over developments in Iraq and Syria; in the recognized advances of and continued threat from radical jihadism in the Middle East, North and East Africa, and the Southern Arabian Peninsula; and in anticipation of force reductions in Afghanistan—to focus not only on fighting war but also on waging war. We have waged war well before; our World War II civil-military predecessors provide a good example. We can do it again, if we put our minds to it.

Lt. Gen. James Dubik, U.S. Army retired, a former commander of Multi-National Security Transition Command-Iraq, is a senior fellow of the Association of  the U.S. Army. He holds a doctorate in philosophy from Johns Hopkins University, Baltimore, and is the author of Just War Reconsidered: Strategy, Ethics, and Theory.