What Science Says About Gender and PTSD

For a moment, let’s forget that American women were not allowed to serve in combat units until very recently. In all truth, the nature of the conflicts in both Afghanistan and Iraq has meant that a soldier’s military occupational specialty is less a predictor of combat experience than it was in previous wars. Combine that with the increasing number of women serving in the military and one fact emerges: Female military members have engaged in, and continue to engage in, combat operations.

According to The Washington Post, which maintains a photo database of recent U.S. casualties, 157 female servicemembers have died in Iraq and Afghanistan. That’s about 4 percent of total U.S. military fatalities in those theaters.

By all accounts, female servicemembers have served admirably. Less clear, however, is what comes next. Researchers have established that between 10 and 20 percent of all Iraq and Afghanistan veterans may experience post-traumatic stress disorder (PTSD), but they remain divided on whether gender plays a role in the illness. 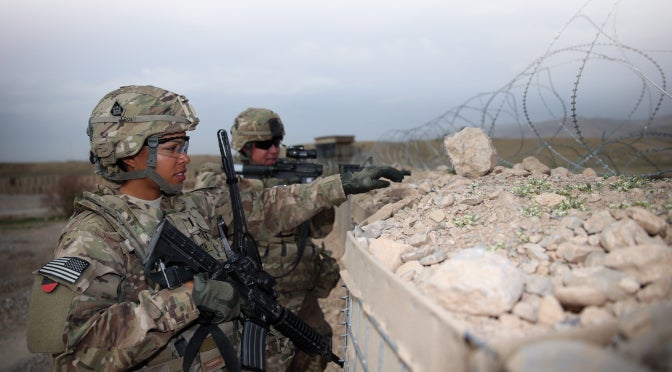 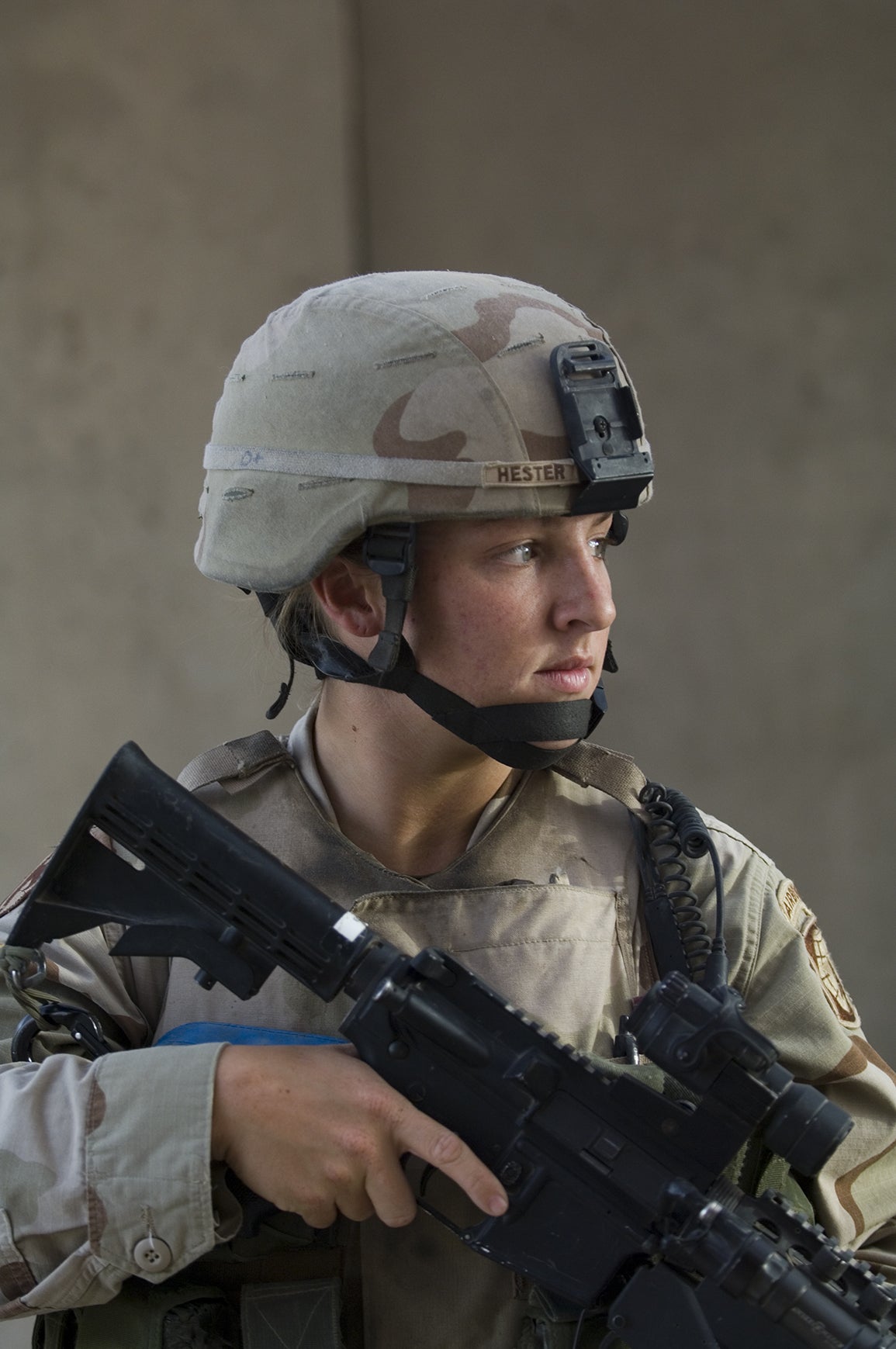 Sgt. Leigh Ann Hester, the first female soldier to be awarded the Silver Star Medal since World War II, was cited for gallantry against armed enemy forces in Iraq in 2005. (Credit: Dennis Steele)

In a comprehensive review of research on gender and PTSD published in Epidemiologic Reviews earlier this year, researchers outlined the results of a series of independent studies on the results of trauma by gender. The authors suggest that while women seem at a moderately higher risk for PTSD, further research is needed, with particular attention paid to predeployment experiences. Women tend to experience more lifetime trauma than men, meaning female veterans are more likely to have been subjected to trauma, sexual or otherwise, prior to their combat experience.

According to Melissa Polusny, a researcher for the Department of Veterans Affairs (VA) and staff psychologist in the Posttraumatic Stress Recovery Program at the Minneapolis VA Health Care System, “Men and women are probably more similar than they are different.” Despite the similarities, most studies on PTSD have focused on where the differences lie. “We’ve always seen them as having different experiences,” Polusny said. “Men tend to see more traditional combat, whereas women are exposed to the aftermath of combat, such as caring for wounded soldiers, and often to additional sexual stressors. With the increasing number of women serving in combat roles, our research team began to wonder if we could explain some of the gender differences we see.” 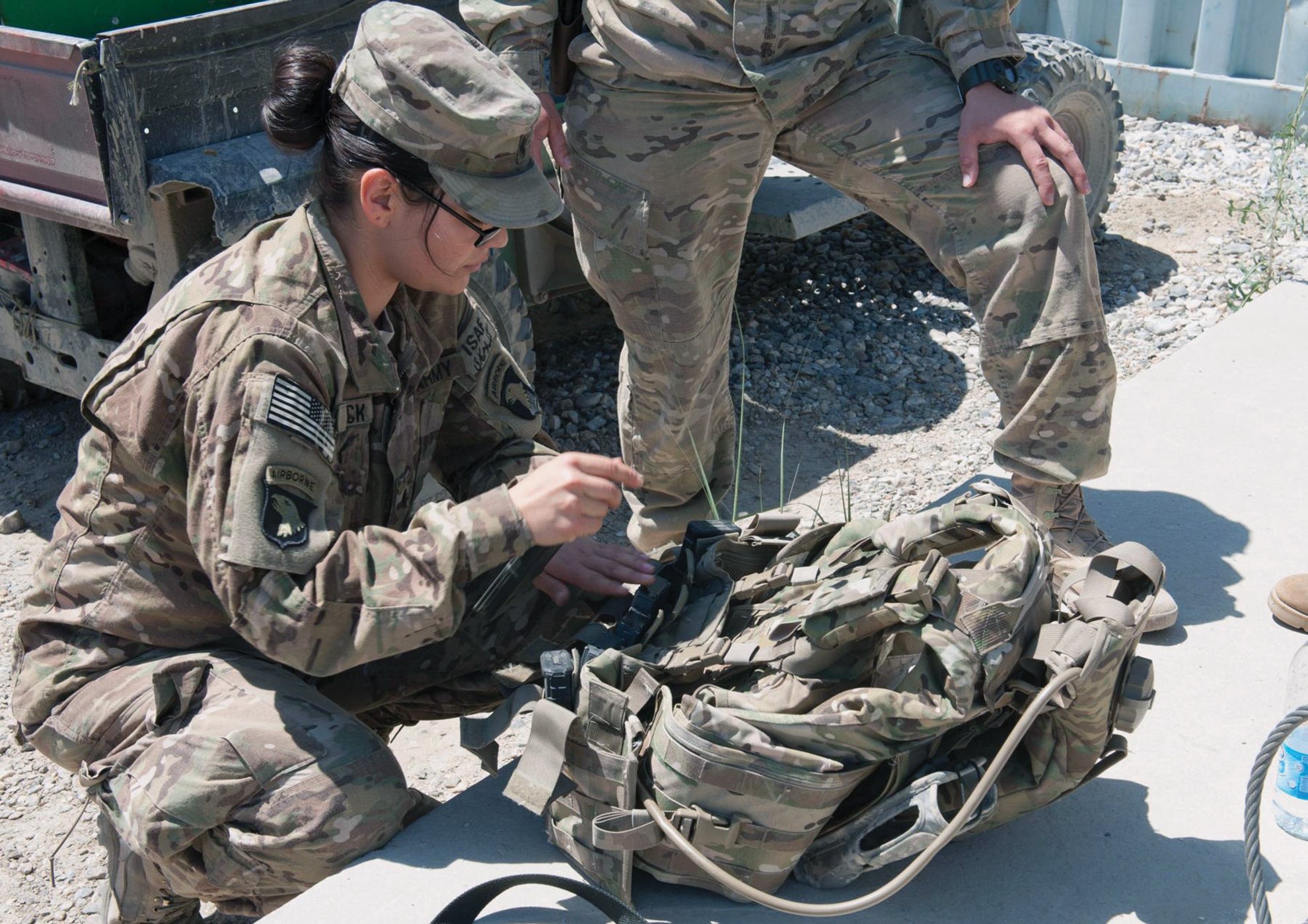 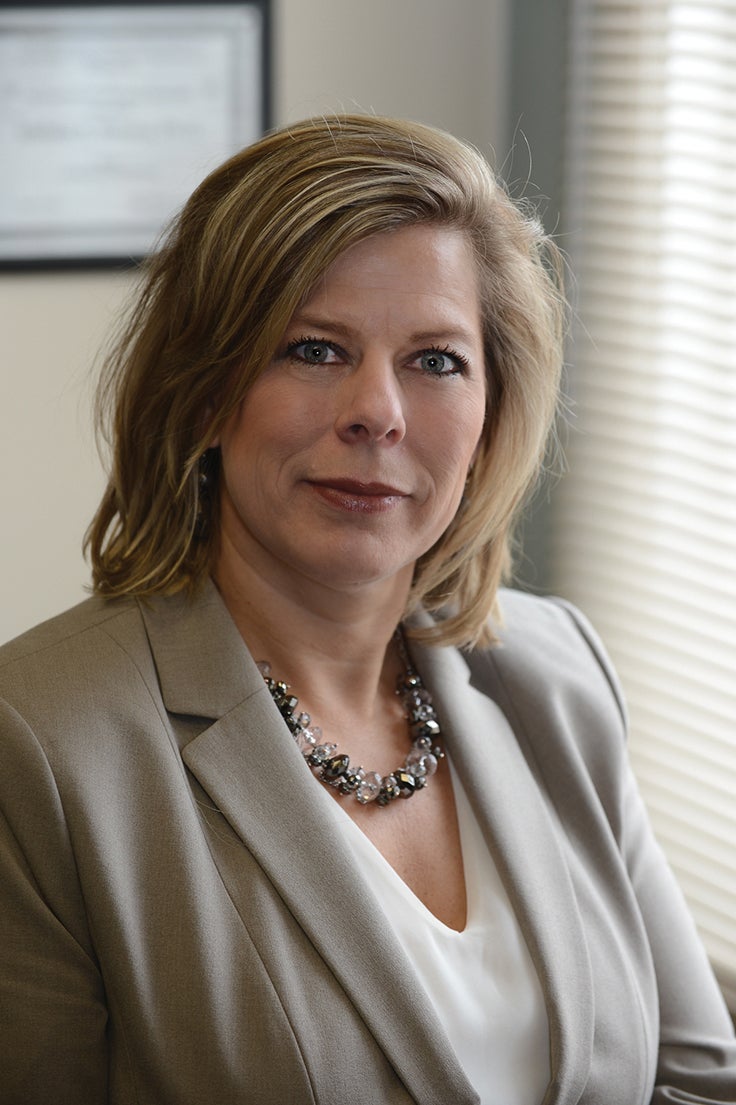 Polusny, who focused on sexual victimization among college students before coming to the VA, set up a study involving two National Guard brigade combat teams. The first deployed to Iraq in 2006, the second to Afghanistan a year later. Of the 801 soldiers in the study, 89 were women. The soldiers were given surveys one month before deployment and then again two to three months after their return. While men reported more direct combat experience, some 75 percent of women took part in combat missions and patrols. Furthermore, men and women were equally likely to have witnessed people sustain severe wounds and to have cared for the injured or dying.

Polusny found that the effect of combat appeared to be stronger in women, suggesting that gender may indeed play a more important role in the development of PTSD than previously believed. Both men and women responded to increased combat with higher levels of PTSD symptoms, but the slope was steeper for women. The same held true for exposure to the dead and dying, caring for wounded soldiers, and concern about family relationships.

While there were important differences in the types of trauma men and women went through, there were also many similarities. “Men were more likely to be fired upon or to have fired their weapon,” Polusny said. “Women were more likely to report experiencing rude and inappropriate comments and attempts by other soldiers to have unwanted sexual contact with them. Both groups were equally likely to come across bodies or experience other wartime traumas such as seeing the injured and dead, or being exposed to devastated communities.”

Polusny and her colleagues, who theorized that PTSD rates among women would be similar to men, were surprised at the results. “The risk was significant for both men and women, but the relationship between combat and PTSD symptoms was stronger for women,” Polusny said. The women in Polusny’s study were nearly twice as likely as their male counterparts to develop PTSD symptoms. When the numbers were tabulated, 22 percent of the women in the study screened positive for PTSD, compared to 12 percent of men. The women also displayed more severe postdeployment PTSD symptoms than their male peers.

“I thought initially the difference was due to sexual stressors, such as harassment, experienced during deployment, but when we controlled for that, there was still a significant difference,” Polusny said. Despite the reports of lower-magnitude sexual stressors, there were no reports of sexual assault during deployment in the sample. Just the same, the potential cumulative impact of soldiers’ experiences of sexual assault within the context of combat is an important issue that warrants further investigation, Polusny said.

“There were several risk factors for women that weren’t at play for men,” Polusny said. “Prior interpersonal victimization was related to higher postdeployment PTSD in women than men. Similarly, while many of these soldiers were worried about the impact deployment might have on their family and life, that concern seemed to have a greater psychological effect on women.”

Interestingly enough, although women reported having lower perceptions of unit support, it wasn’t a significant predictor of PTSD. For men, on the other hand, a lack of unit support was a problem. Polusny said she suspects that perhaps women may be accustomed to feeling less unit support and may instead rely on other female soldiers and external connections, like families and civilian friends. 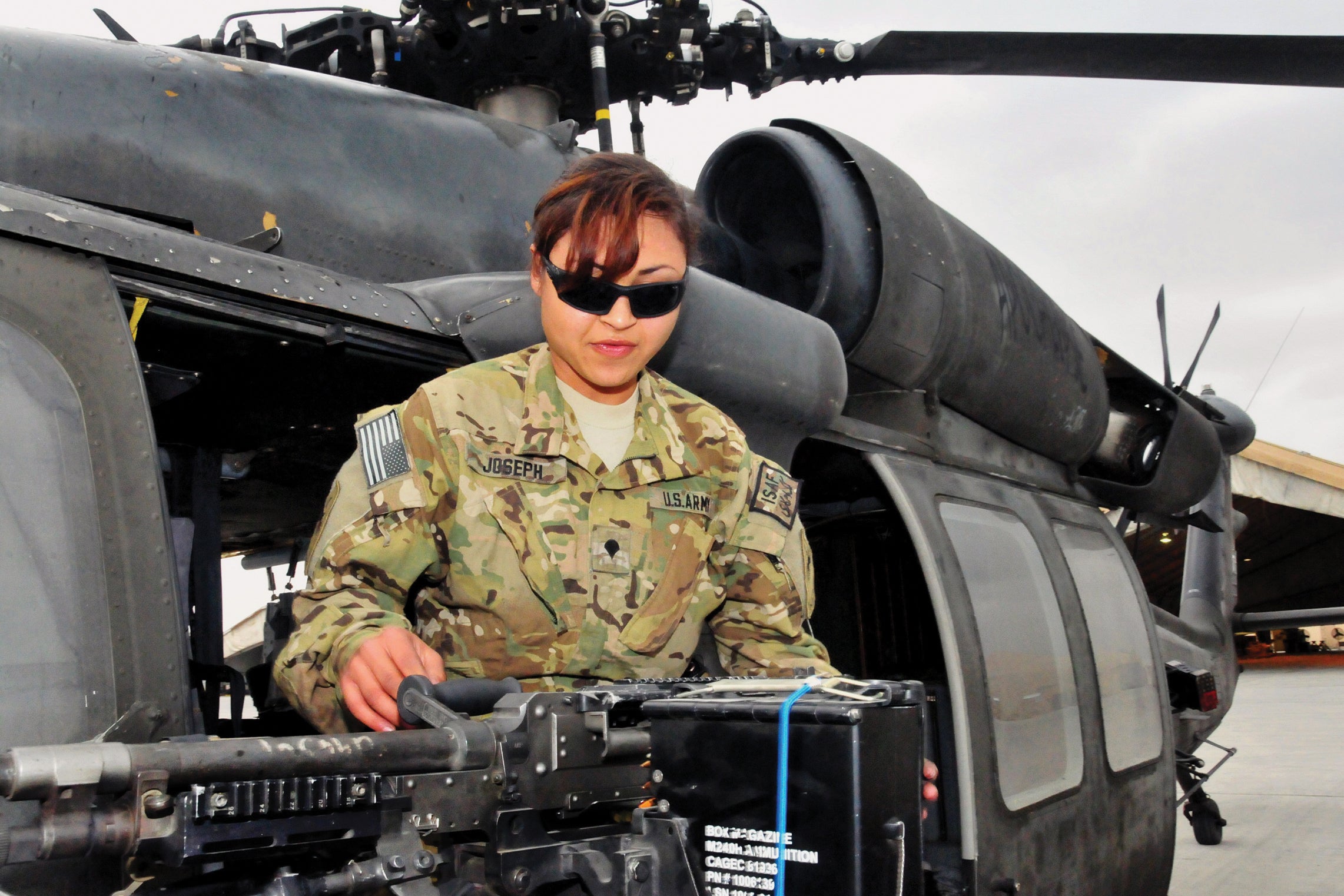 Another major factor in Polusny’s study was perceptions of preparedness. Her team found that women are less likely to feel prepared for their deployments. From a training perspective, they might be on par, but psychologically, women tend to doubt their own military preparedness. “It’s possible there are gender differences in how people view their own capacities,” Polusny said. “We also know that the personality traits of negative emotionality, or the tendency to worry, is an important predictor of future PTSD, and that might be contributing to what we’re seeing here.”

It is important to note that most people exposed to combat and other traumas in the study, whether men or women, did not develop PTSD—a finding that is consistent with previous studies. In Polusny’s study, both men and women developed PTSD symptoms, but the relationship between combat experiences and PTSD symptoms happened to be stronger for women.

“This does not mean women should not be serving or that they aren’t capable of doing certain jobs,” Polusny said. “This isn’t about what someone can or can’t do. This is about identifying the best way to bolster soldiers’ resilience prior to deployment and care for them after the deployment ends.”