On Jan. 30, 1968, the Viet Cong and North Vietnamese Army launched a wave of surprise attacks throughout South Vietnam.

Known as the Tet Offensive, it ended in a major military defeat for the North. Fifty years later, the anniversary offers an appropriate time to examine Vietnam War titles published as part of the AUSA Book Program.

Mark Bowden, bestselling author of Hue 1968 and Black Hawk Down, recently shared high praise for AUSA’s The Lost Battalion of Tet: Breakout of the 2/12th Cavalry at Hue by Charles A. Krohn.

Bowden said, “The Lost Battalion is the best book written about the U.S. Army’s involvement in The Battle of Hue, and one that I found invaluable in crafting my own book on the bloodiest single battle of the Vietnam War. Krohn’s firsthand account of his battalion’s ordeal in the rice paddies northwest of the city is gripping, tragic, and ultimately heroic.” 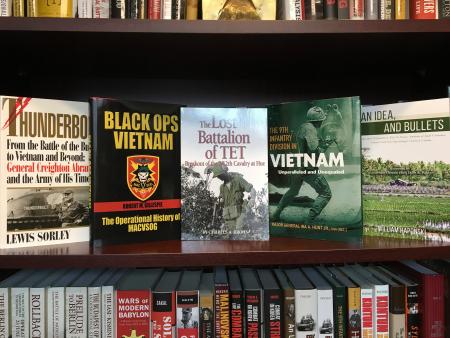 The AUSA Book Program offers a full range of titles that examines the conflict while commemorating the service and sacrifice of the men and women who were deployed. (AUSA News photo by Joseph Craig)

Krohn, a retired lieutenant colonel who was an Army captain at the time, is proud of the story and “humbled” that Bowden “included our battalion in his literary masterwork.”

Moving from Hue to the Mekong River Delta, The 9th Infantry Division: Unparalleled and Unequaled details the fight against the Viet Cong in the South.

Retired Maj. Gen. Ira A. Hunt, Jr., then a colonel and division chief of staff, describes how they used “all-source intelligence coupled with aggressive night and day tactical operations” to protect the local people as part of the pacification program.

The late Gen. Jack N. Merritt, a former AUSA president, noted that “the book provides fascinating insights into the counterinsurgency war . . . lead[ing] one to understand the successes of the U.S. Army that many thought impossible.”

Others came away with a different understanding of Tet. Retired Col. William Haponski, author of An Idea, and Bullets: A Rice Roots Exploration of Why No French, American, or South Vietnamese General Could Ever Have Brought Victory in Vietnam, felt that “the scars of Tet ’68 were everywhere.”

In his view, “we succeeded in combat, but despite our best efforts we fell short in pacification, and sadly, Vietnamization never had a chance.”

Retired Lt. Col. Lewis Sorley has a different perspective: “Tet turned out to be highly advantageous for the South Vietnamese (and the Americans) for a reason seldom mentioned. It precipitated the long overdue and desperately needed replacement of Gen. [William C.] Westmoreland as U.S. commander in Vietnam.”

Sorley’s Thunderbolt, a biography of Westmoreland’s replacement, Gen. Creighton Abrams, was a very early addition to the AUSA Book Program.

Responses to Tet were not always visible to the public. The Military Assistance Command, Vietnam Studies and Observations Group (MACVSOG) was a highly classified unit consisting of Army Special Forces, Navy SEALs, Marine Force Reconnaissance units, the Air Force, and the CIA.

In Black Ops Vietnam: The Operations History of MACVSOG, Robert M. Gillespie tells the tale of their clandestine work during Tet and other events in Vietnam, ranging from the Gulf of Tonkin incident to the Son Tay POW raid.

Of course, the Vietnam War involved far more than Tet, and AUSA books reflect the full range of the conflict with titles such as Danger’s Dragoons: The Armored Cavalry Task Force of The Big Red One in Vietnam, 1969; Team 19 in Vietnam: An Australian Soldier at War; and Kontum: The Battle to Save South Vietnam.

Look for these publications and more at https://www.ausa.org/books.