For over 100 years, the United Kingdom and the United States have fought alongside one another as we, together with our allies, have sought to protect our way of life and help shape a bright and prosperous future for our children and grandchildren. As brothers in arms, we have fought two world wars, brought about the end of the Cold War, and operated side by side in Korea, the Balkans, Iraq and Afghanistan. Like all close friends, there have been disagreements—think Suez and Vietnam—but the relationship between the U.K. and U.S. militaries is, today, closer than that of any other two nations.

And the relationship at the army level is deeper still, marked by defining personal partnerships and shared sacrifices on the battlefield, probably especially so for the current generation of mid- to senior-level leaders who have common experiences in Afghanistan and Iraq.

But what of tomorrow’s leaders? What of the relationships between those young men and women in our respective armies who may be called upon to lead in combat should great-power competition stray into armed conflict? It is questions such as these that drive the British and U.S. Army’s current interoperability work to ensure, bilaterally and as part of an alliance, we are ready to deploy, fight and win together on the future battlefield.

This statement reflects the deep trust and faith the countries have in each other, and the progress in the ability to work together has been significant. This is hardly surprising because, just like the U.S. Army, the British Army is a committed, capable and like-minded partner.

The British Army is committed to operations around the world alongside U.S. forces. The U.K. has troops deployed in Afghanistan, Iraq, Ukraine and the Balkans. We have numerous training teams in Africa; Nigeria is a key focus area, but we also conduct capacity-building in other African countries, including Somalia, Sierra Leone, Algeria, Kenya and Ethiopia, where activity is synchronized with the U.S. Army to ensure both countries’ resources are employed in the most effective manner. 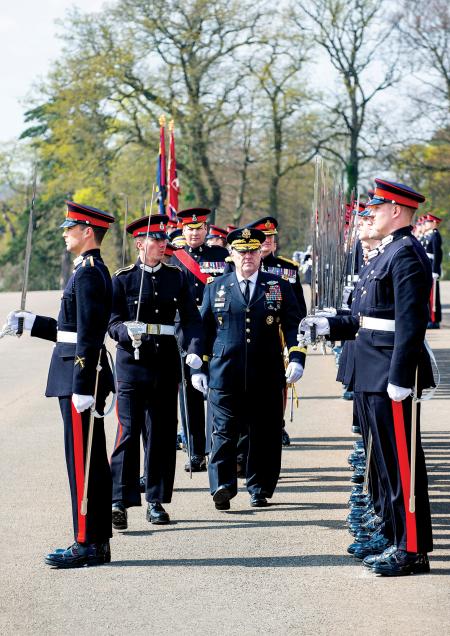 Chief of Staff of the Army Gen. Mark A. Milley stands in for the queen of England at a parade for cadets being commissioned as officers into the British Army. The parade took place in April at the Royal Military Academy Sandhurst in the U.K.
(Credit: Tempest Photography)

The U.K. and U.S. also are leading nations in NATO’s Enhanced Forward Presence mission in Eastern Europe, with battlegroups committed to Estonia and Poland, respectively. The U.K. has about 1,000 troops deployed across Eastern Europe, including a British Army reconnaissance company under U.S. command in Poland.

Additionally, the British Army is training for operations around the world alongside U.S. forces. We do this at multiple levels:

The British Army invests heavily at all echelons of warfighting, from company to corps. In addition to the series of U.K./U.S. exercises previously described, every level of command trains routinely for high-end combined-arms maneuver. We are particularly proud of our level of investment at the division and corps levels.

For example, at the corps level, Headquarters Allied Rapid Reaction Corps’ Joint Fires and Influence Branch participates, about every other year, in Exercise Dynamic Front, U.S. Army Europe’s primary annual fires integration event. At the divisional level, our artillery brigade is also a key component of Dynamic Front, but likewise participates in the Warfighter series of exercises. By so doing, we have successfully plugged into the U.S. Army fires architecture at multiple levels, and exercised command of U.S. artillery battalions.

The British Army is also focused on modernization and experimentation to ensure we remain capable and compatible with allies and partners, but particularly with the U.S. Army. Much like the U.S. Army’s modernization agenda, we too are focused on identifying and procuring the capabilities required to prevail in future conflict.

And to help shape investment decisions, we have embarked on an ambitious experimentation agenda. We conducted the U.K.’s largest military robotics exercise in late 2018, with support from a squad of U.S. infantry. Early findings have encouraged our secretary of state for defense to commit nearly $100 million to fast-track a number of projects this year. Several of these will be deployed to operational theaters by the end of this year to enable experimentation on operations as well as in training.

We have also made our experimentation work mainstream business. We have tasked one of our brigades to focus exclusively on fielding modernized strike capability and develop the tactics, techniques and procedures required for future speed of assembly and delivery of rapid and strategic projection and effect.

If the U.K. and the U.S. are to fight and operate side by side, then both countries need men and women in our armies who understand each other’s concepts, doctrine and planning processes. One way to do this is through shared professional military education. The respective investment in this area is unparalleled.

For example, every major in the British Army spends two weeks at the U.S. Army Command and General Staff College at Fort Leavenworth, Kansas, as part of their six-month staff training course, during which British and U.S. Army majors focus on planning and running divisional-level operations using planning processes from both countries. Aside from the doctrinal and broader educational value, the opportunity for tomorrow’s leaders to get to know one another in a relaxed, convivial environment is invaluable.

But this is only one of numerous examples where British Army personnel from sergeant major to three-star general attend U.S. Army (and joint) courses, and vice versa, ranging in length from two weeks to a year. Other examples include British soldiers attending U.S. courses such as Pinnacle, Capstone, the U.S. Army War College and the U.S. Army Sergeants Major Academy, and U.S. soldiers attending British courses such as the Royal College of Defence Studies, Higher Command and Staff Course, and Advanced Command and Staff Course.

In an era of persistent and intense competition, when adversaries and competitors are becoming more adept at exploiting the seams between peace and war, the trans-Atlantic defense relationship becomes ever more important. This partnership is unparalleled at multiple levels: from nuclear and intelligence cooperation, to decades of combined operations and training overseas, which has ingrained interoperability across the maritime, land and air domains, and with Special Forces. At every level, this strong connection between the U.S. and U.K. militaries means a great deal to us. It has depth and an emotion to it that is profound.

The U.K. and the U.S. have fought side by side for more than 100 years. We are proud of this shared history, and equally proud of the current level of investment in ensuring the British Army remains a credible warfighting partner today and, importantly, tomorrow.