Treating Others With Respect Is a Core Value

Treating Others With Respect Is a Core Value

“Mission first, people always” is a motto that rings true and cuts to the heart of what the Army is about. The Army exists to deploy, fight and win our nation’s wars, yet every aspect of operations remains a human endeavor. A soldier is behind every weapons system, tank, aircraft, computer and decision made in order to accomplish the mission. It is a soldier, an American son or daughter, who takes an oath to support and defend the Constitution, who stands ready and courageously on point for the nation and who understands the sacrifice involved in being part of a purpose greater than self.

Soldiering is more than a job. It is a lifestyle, a calling, a labor of love and a great privilege. Respect, both for oneself and others, is a value required of leaders and soldiers at all levels to build cohesive teams and allow mission accomplishment.

In order to accomplish the mission, the Army requires soldiers and leaders of character and competence committed to living the Army Values and performing their duty in accordance with the Army Ethic anytime, anywhere. The Army Ethic is the heart of our shared professional identity as honorable servants to the nation. It defines our guiding moral principles and embodies our values, ethos, creeds, oaths, standards and laws within the Army profession. To violate the Army Ethic is to break our sacred bond of trust with each other and society.

Respect, a core Army value integral within the Army Ethic, is fundamental to people’s lives and mission success. Respect begins within oneself and stems from dignity, a basic human right. Dignity comes from a place of value, worthiness and sense of self-respect. People are hardwired for belonging, connection, contribution and purpose. Although hardship, loss and struggle are realities of the human experience, stripping a person of dignity will always lead to suffering. Dignity allows human beings to persevere, engage, remain resilient and courageously strive in the world.

Respect in its purest form is the Golden Rule, to treat others how we want to be treated. As soldiers, we pledge to treat others with dignity and respect while expecting others to do the same. The Army Ethic calls on us to recognize the dignity and worth of all people, treat them with respect and compassion, and place others’ needs above our own. Respect leads us to give our best effort for the team, expect the best in others and humbly realize we are part of a greater mission: defending America’s freedom.

The most respectful thing a leader can do is create a climate of accountability to ensure actions and behaviors align with the Army Values and standards for team and mission success. Just as a parent corrects a child they love or a pilot makes course corrections to stay on a glide path, leaders must ensure a healthy team climate for high performance.

The Army Values and standards live or die in the small moments, and when it comes to respect, we must treat the person in front of us, right now, in the right way. Any disrespectful interaction strips dignity and leaves people feeling oppressed, humiliated, ignored, belittled and de-energized. Disrespect is dangerous and can spread like a disease if tolerated. Any form of disrespect must be corrected promptly as every misdeed left unchecked will erode the organization, placing the mission and people’s lives at risk. Leaders must keep a finger on the pulse of the organization from the center to the furthest end to determine true health and promote a climate of respect and accountability in order to accomplish the mission.

Leadership is paramount to the profession of arms. When it comes to accomplishing the mission and caring for people, leaders must do both. Then-Gen. Colin Powell demonstrated that service is about people and every person’s contribution matters for the mission. As a leader, he emphasized that kindness toward others is an overall attitude, a sign of confidence, not weakness. Leaders should show compassion to others and expect nothing in return, as people need it more than we realize.

Powell was known for engaging with the lowest-level soldiers, greeting everyone by name, taking care of subordinates, listening and learning about others. He taught that respect is earned by leaders through care, competence, honesty, sacrifice, personal courage, being an inspiration and never being abusive. Respect is also earned by remaining tough but fair, communicating clear expectations and creating a climate of accountability for mission success. His leadership proved that if subordinates respect you, they will never let you down.

Gen. Omar N. Bradley observed, in part, “Leadership means firmness, not harshness; understanding, not weakness; generosity, not selfishness; pride, not egotism.” His perspective aligns with guidance given by Maj. Gen. John Schofield regarding leading soldiers in 1879:

The discipline which makes the soldiers of a free country reliable in battle is not to be gained by harsh or tyrannical treatment. On the contrary, such treatment is far more likely to destroy than to make an army. It is possible to impart instruction and give commands in such a manner and such a tone of voice as to inspire in the soldier no feeling but an intense desire to obey, while the opposite manner and tone of voice cannot fail to excite strong resentment and a desire to disobey. The one mode or the other in dealing with subordinates springs from a corresponding spirit in the breast of the commander.

Respect, how we treat others, is ultimately a condition of our heart. Character is who we really are: our innermost thoughts, motives, attitudes and moral qualities. Who we are on the inside matters most because who we are on the inside influences what we do on the outside. Our inside development and victories must always precede our outside ones. As one legacy leader put it, “To win once takes talent, but to win again takes character.” 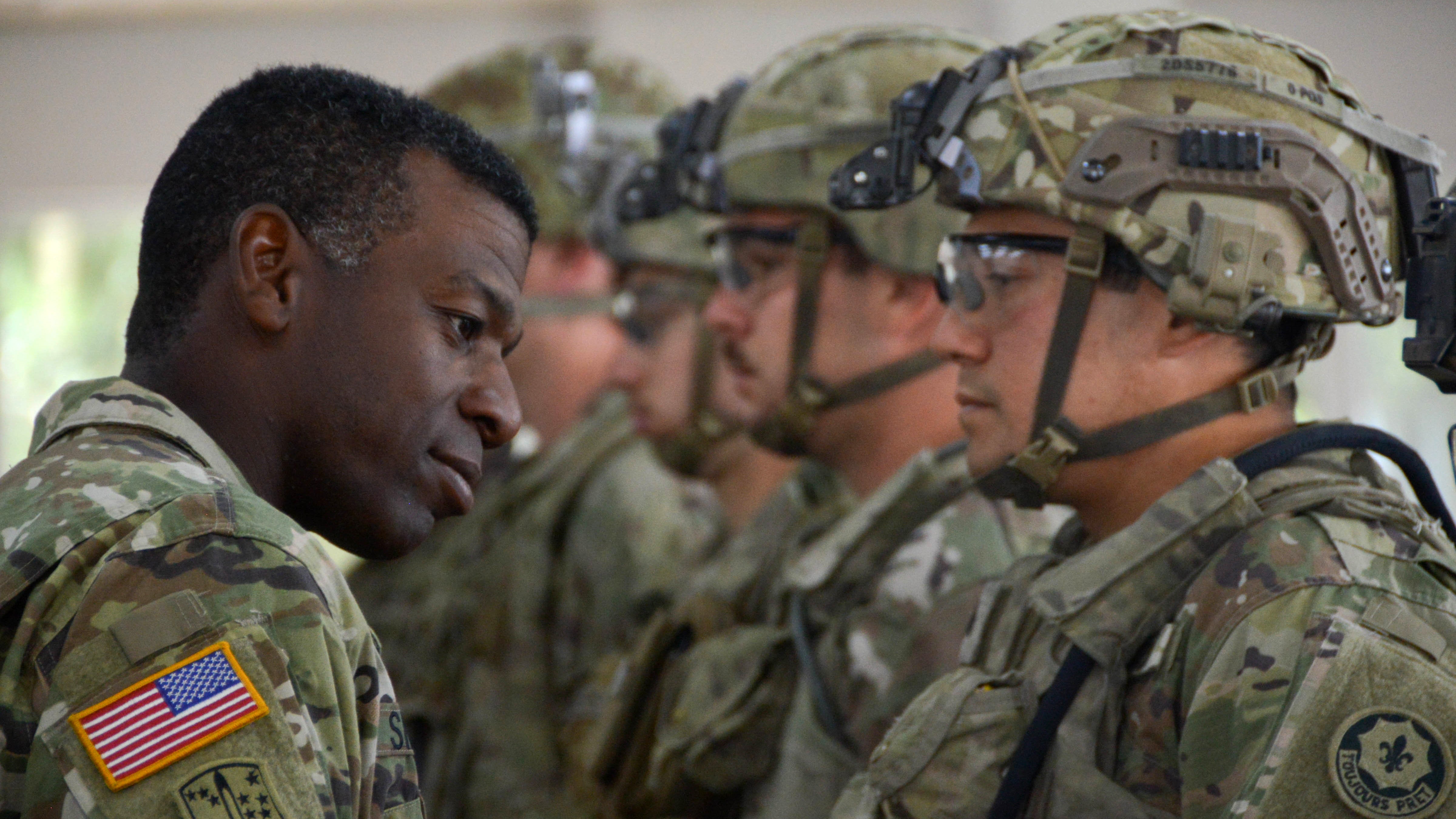 The Army requires leaders of character who display respect for others, and who can withstand adversity and resist temptations to negotiate when it comes to living the values and doing what is right for soldiers and the Army.

A good measure of character is how an individual treats others regardless of status or power. The military rank structure is necessary for maintaining good order and discipline along a clear chain of command. This is a defining characteristic and vital to mission success, especially in combat.

However, with rank comes power, which at any level can be abused and change people for the worse. A leader must be self-aware, continuously reflect upon the condition of their own heart, and realize it is easy and dangerous to prioritize position over people. The best leaders close the power gap, get their egos out of the way, and respectfully and selflessly serve their followers and mission first.

A “kiss up-kick down” approach to people is often on display throughout military culture. Toxic leadership is a combination of self-centered attitudes, motivations and behaviors, while lacking true concern for people or the mission. This type of leadership is delusional and ineffective and has harmful effects on people, the organization and mission performance. Toxic leadership at any level must be eliminated as soon as it is identified to preserve the health of the force. When people feel disrespected by self-serving leaders, they will disengage, look for other opportunities, or give the bare minimum in an effort to self-protect due to lack of trust.

Servant leadership is the only kind of leadership the Army can afford with the mission and lives of soldiers at stake. In every formation, a sergeant is often the most influential leader for a group of soldiers. It is important to understand that the word “sergeant” comes from the French word “sergent,” meaning “servant,” which in turn derives from the Latin word “serviens,” which means “servant” or “soldier.” The goal of a servant leader is to serve, nothing more, nothing less.

Humility is one of the most powerful leadership traits, found in servant leaders, who place the mission and those who accomplish it above self. A servant leader enhances the health and performance of an organization. Soldiers deserve leaders with the heart and strength of a servant.

Our professional obligation to respect everyone applies both in peacetime and in war. The Geneva Conventions encompass standards for humanitarian treatment in combat and recognize the basic human rights of everyone, including enemy noncombatants, the disarmed, wounded, prisoners of war and civilians. Soldiers are expected to treat everyone with dignity and respect and are responsible for the safety and welfare of enemy persons captured during combat.

Any act of violence, outrages upon personal dignity, insults, intimidation, or humiliating or degrading treatment are strictly prohibited. Compliance with these standards may be difficult after experiencing the harsh realities of war, but that never excuses our obligation to do what is right. Even in the worst conditions, the Golden Rule applies, and we must treat our enemies as we want to be treated.

Combat medics accompany the infantry into every combat mission to provide immediate lifesaving treatment and evacuate casualties under fire. A medic’s job is to be there, to put the needs of others before self, even at the cost of their own life. “Angels of Mercy” are how combat medics have been portrayed on the battlefield because of their lifesaving presence for others in the worst and most vulnerable moments. Medics triage and treat combat casualties, including friendly forces and enemy noncombatants. Combat medics risk their lives to save others and demonstrate dignity and respect for all of humanity in the worst possible conditions.

Mission first, people always. The Army’s mission and the life of every soldier demand the utmost respect. Respect originates from within and must be given freely to others. When respect is present in all our actions, it strengthens the health of teams, the Army and the nation.

Ultimately, sacrifice is at the heart of the profession of arms, and there is no greater form of respect than a soldier willing to lay down their life for the freedom of another.