In his new job as commander of the U.S. Army Training and Doctrine Command, Gen. Stephen J. Townsend brings deep combat and operational experience to an assignment he had never considered before—commanding the part of the Army that recruits, trains and educates the soldiers he’s led into battle.

During 36 years in the Army, assignment to the machine that churns out the newest soldiers and molds them into professional leaders had eluded Townsend. Now at Training and Doctrine Command (TRADOC), he is at the helm of one of the Army’s four major commands and responsible for the Army’s doctrine and annual recruiting mission, over 2,400 education and training sites around the world, more than 47,000 soldiers and civilian employees, and at least 500,000 students each year.

Townsend is approaching the job from the point of view of someone who is at once fresh and learned. 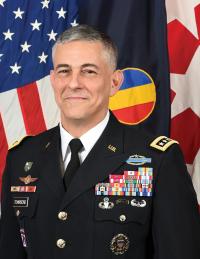 “I never really gave much thought to what TRADOC does for our Army,” Townsend said in an interview that he pointed out was taking place on his 120th day on the job. “Now I’m in charge, so I’m thinking about it a whole lot. Just now, today, I told my staff that I’m starting to feel like I have enough [situational awareness] to start directing some things.”

Townsend’s familiarity with the needs of the operating force is woven into his life. Adopted at birth by a U.S. Army family in Germany in 1961, he was raised in Griffin, Ga., and commissioned into the infantry from North Georgia College ROTC in 1982. A year later, Townsend deployed with the 82nd Airborne Division to Grenada as part of Operation Urgent Fury, followed by deployments to U.S. operations in Panama in 1989 and Haiti in 1994. Townsend continued his operational march in dozens of combat jobs and units, including the 75th Ranger Regiment, and took on increasingly higher levels of responsibility after 9/11 in Iraq and Afghanistan.

When Townsend took command of TRADOC on March 2, he had just completed nearly three years as commanding general of the XVIII Airborne Corps at Fort Bragg, N.C. During his time there, he also commanded Combined Joint Task Force-Operation Inherent Resolve, leading the U.S. effort against the Islamic State group in Iraq and Syria.

As his career progressed, Townsend trusted that TRADOC’s leaders were “on their mission like I was on my mission,” he said, admitting that TRADOC courses were “more demanding than I expected they would be.” He never gave a thought to how it all came together, though. “I was never a TRADOC basher because I was never a complainer. The new privates and the new lieutenants arriving in my units all seemed to be pretty good, high-quality, ready to go.”

Townsend’s newest mission became clear during an intensive, 90-day battlefield circulation to TRADOC’s schools, recruiting stations and subordinate commands, where he put an ear to the ground and investigated what needed to be done. “The big thing was listening to the leaders and then bouncing that off of what I was hearing and seeing otherwise,” said Townsend, who understands TRADOC’s responsibility as one of keeping the Army ready for war by staying steady on the road to improvement.

“An army is either improving or it’s going backwards,” Townsend said. He added that because adversaries around the world are always working to improve, the Army must maintain a constant focus on being “more deployable, more lethal, more sustainable, and better integrated as part of the joint force.” Townsend’s plan to instill that constant focus is centered on a mix of near-term and enduring priorities laid out in his first missive to TRADOC leaders addressing issues such as leadership, accessions, basic training, soldier lethality and TRADOC’s role in Army doctrine.

The Army has placed a premium on keeping the operational force manned at the highest levels possible, and coming from that side of the Army, Townsend said, “I always thought that was exactly the right decision.” However, following his TRADOC familiarity tour earlier this year, where he observed up close the effect those manning decisions have had on the training base, Townsend discerned “that we’ve probably taken it a bit too far.”

“I think we have trimmed to the bone on manning our Initial Entry Training enterprise, the first courses people go to, basic training and Advanced Individual Training. I think those enterprises have been drawn down absolutely as far as they can go,” Townsend said, citing the need to invest more in the Army’s “generating force.” Comparing it to a pickup truck factory where getting quality output means hiring more factory workers, not asking more from the same workers or taking shortcuts, Townsend said he is “engaged in discussions with Army leadership” about how to increase the leader-to-led ratio in the training base.

“We’re still growing the Army, and we want to increase the quality, so to do that we have to man the factory,” he said.

Townsend shares Army Secretary Mark T. Esper’s concern that the service is becoming a family business and needs to appeal to a broader audience. He’s brimming with ideas on tackling that concern, and he is running with some ideas that were underway when he arrived at TRADOC.

One of those is an increase in hometown recruiters, junior enlisted leaders and officers who return to their communities on special temporary duty for up to a month to make the rounds with recruiters and tell the Army story.

“Usually, when soldiers come out of basic training, they are all fired up, and the young people have been transformed. We want to take advantage of that,” Townsend said.

Townsend strongly supports the ongoing effort to rebrand the Army and revamp its marketing campaign, believing more Americans would be willing to serve if they know something about the Army beyond what they see on TV and in the movies.

“They don’t really know what the Army is, what the Army does and what the Army offers to a young person starting out in life. We need to find a way to improve that,” he said, predicting that “doing a better job” of explaining the Army will inspire more Americans to serve and bridge the civil-military gap he observed during his tour.

Calling for strengthening the Army profession by developing leaders of character who are “alert, calm, approachable, competent and committed,” Townsend’s own tenet for leadership has been shaped by Army doctrine and experience, but also by leaders who were less than ideal. “I still remember them to this day,” he said.

Townsend’s guidance is simple: Be the kind of boss you would want, foster a professional, positive command climate, and lead with a philosophy of Mission Command.

“Be the leader you want to be led by. All the great leaders I’ve had, the great subordinate leaders I’ve seen, knew their soldiers, and their soldiers weren’t afraid to walk up and talk to them because they were calm and approachable,” he said, noting that this guidance goes for everybody, including civilian leaders.

Soldiers coming out of the training base will need to be ready to fight the day they sign in to their first units, and “on very short notice deploy to conduct operations worldwide,” Townsend said, praising current efforts to “improve and toughen basic training around our Army” and extend infantry one station unit training.

Townsend also commended Army leadership’s decision to place soldier lethality, the focus of a cross-functional team of the U.S. Army Futures Command, on par in importance with the Army’s other top modernization priorities. “It puts the soldier and the small unit, the squad and platoon, at that same level of priority as major platforms or weapons systems, which I find to be refreshing,” Townsend said.

The importance of readiness, he said, is the shared responsibility of the U.S. Army Forces Command and TRADOC. “A lot of people think TRADOC mostly is focused on readiness for tomorrow,” he said, suggesting that the same people may think the job to “fight tonight” belongs to Forces Command. “I don’t think that’s the case. I think TRADOC has a foot in both roles equally.”

Emphasizing the importance of constant improvement, Townsend will focus on the continuing education and training soldiers and officers receive as they progress through their careers. His guidance will encourage strong and regular reference to the wealth of information found in the Center for Army Lessons Learned, a TRADOC resource at Fort Leavenworth, Kan.

The center gathers and observes lessons learned from across the Army and makes them available to commanders and units to learn from the mistakes and successes of others and avoid relearning or repeating mistakes. “We still sometimes make the same mistakes two or three times, but when one leader or one unit learns a lesson somewhere in the Army, there’s a deliberate process to spread that around. I think it’s one of the strengths of our Army,” Townsend said.

In one of his first decisions as TRADOC commander, Townsend reviewed his predecessor’s concept of Multi-Domain Battle and refined it to become known as Multi-Domain Operations, an updated concept he plans to accelerate into doctrine and practice.

The change quickly won the approval of Army leadership, he said, because it addresses the view outlined in the National Defense Strategy that nation-state competition occurs before conflict, and the Multi-Domain Battle concept rolled out in 2016 “seemed overly focused on the conflict phase.”

Multi-Domain Operations addresses how the Army will fight in the air, land, sea, space and cyber areas. “We will be able to integrate those faster and better than any of our adversaries can. This is the strength of the Army today and we will improve dramatically our ability to do that in the future,” Townsend said.

The Army’s future material will be better because of Futures Command, but Multi-Domain Operations is the doctrine that will make application of that material “vastly better than our adversaries will be able to do.”

*The online version of this article corrects the year Townsend was born and eliminates a phrase that had stated the soldier lethality cross-functional team fell under TRADOC. The team is now under Futures Command.