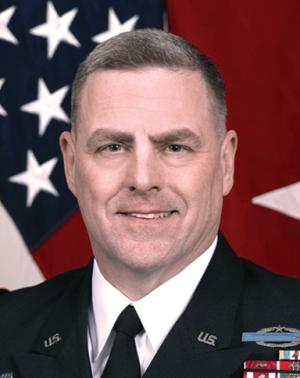 The mission of U.S. Army Forces Command is to train, mobilize and provide forces to operate as part of the joint team when our nation calls in order to prevent conflict, shape outcomes or, if necessary, win decisively against any foe, anywhere, anytime. Winning matters; there is no second place in combat.

The key to victory lies in a professional land force—tough, well-trained and led by smart, inspired, adaptive leaders. That is the task of U.S. Army Forces Command (FORSCOM), and for four decades, the dedicated soldiers and civilians of FORSCOM have answered the nation’s call. Located at Fort Bragg, North Carolina, FORSCOM prepares U.S.

Army conventional forces to provide a sustained flow of trained and ready landpower to combatant commanders (CCDRs) in defense of the nation at home and abroad.

To accomplish our mission, FORSCOM operates as a strong, integrated total Army team—active component (AC), Army National Guard (ARNG) and U.S. Army Reserve (USAR). FORSCOM incorporates a total force approach into everything we do. The deployable formations from our Army total force are organized into three corps headquarters, 16 division headquarters (eight AC and eight ARNG), and 22 AC, ARNG and USAR functional general-officer-level commands. These headquarters, along with their subordinate brigade combat teams (BCTs) and multifunctional and functional brigades, create a powerful landpower team.

A Year of Mission Success

This year, the FORSCOM team met every Joint Chiefs of Staff-validated request from the CCDRs for trained and ready decisive land capabilities at every echelon from small teams to corps and divisions. Early in the year, III Corps redeployed from its successful mission in Afghanistan and was replaced by XVIII Airborne Corps Headquarters. I Corps, stationed at Joint Base Lewis-McChord, Washington, continued its assigned mission in support of U.S. Pacific Command (USPACOM), developing a joint task force capability specifically for USPACOM. Throughout 2014, all eight of FORSCOM’s AC divisions deployed as allocated or aligned forces to CCDRs, providing Mission Command forward and reach-back analysis and planning from home station. This year, 90 percent of FORSCOM’s AC combat brigades, 15 percent of ARNG combat brigades, and 100 percent of USAR functional and multifunctional brigades were either allocated or aligned to combatant commands under the regionally aligned forces (RAF) concept. Thousands of soldiers deployed globally in small tailored units to conduct deliberately planned exercises as part of regional CCDR engagement or in response to emerging contingencies.

To offset sequestration’s impact on fiscal year 2014 readiness, the Army directed full readiness resources to six of our 32 AC BCTs and a combat aviation brigade, enabling them to train to the Army’s highest readiness level. Referred to as the Army Contingency Force, this prioritization of resources ensured that a portion of the Army remained ready and available to provide our nation’s leaders with strategic flexibility and operational depth.

In collaboration with sister commands and agencies, we transformed the way we employ home station and CTC training enablers. At the CTCs, we implemented a program employing multicomponent observer-controller/trainer teams for every rotation. Our CTC training strategy also focuses our units to operate as members of the joint and combined team. We have dramatically increased integrated training events between U.S. conventional forces and special operations forces (SOF) at home station and CTCs, integrating SOF in 12 of 18 CTC rotations in 2014. Similarly, this past year saw units from partner nations Japan and Korea training at the National Training Center alongside their regionally aligned U.S. counterparts during two separate rotations, reinforcing the combined nature of the modern battlefield.

Our training strategy is fully nested with the Army Total Force Policy. This year, we tripled RC unit participation in our CTC rotations, and the total force team achieved similar results with the 2014 Mission Command Training Program (MCTP). Of the 38 brigade-level and above formations that participated in MCTP, 21 were ARNG or USAR. In 2015, all CTC rotations, ARNG exportable CTC events and USAR combat support training exercises will include fully integrated, multicomponent organizations.

To better enable leader development in units, we reorganized our headquarters structure to create a multicomponent leader development directorate. This reorganization enhanced FORSCOM’s interaction with the broader network of Army leader development partners and serves as a foundation for values-based decisionmaking focused on developing leaders of character across the continuum of service.

Other priority areas of commandwide focus are the Health of the Force campaign and our Sexual Harassment/Assault Response and Prevention program. FORS-

COM commanders and command sergeants major have implemented innovative approaches to defeat the scourge of sexual crime in our Army. Many of these tools are being replicated in units Armywide. These reflect our enduring commitment to support an environment of dignity and respect based on mutual trust that is essential to our current and future readiness.

FORSCOM’s top priority for 2015 remains readiness. We will provide CCDRs trained, staffed, equipped and well-led conventional forces that can win decisively or conduct myriad operations in order to deter our enemies and assure our allies. In 2015, FORSCOM will maximize opportunities to improve readiness and continue our efforts to enhance regional engagements and provide globally responsive forces in support of CCDRs within the RAF framework. We will mature the AC-RC Partnership Program and execute longer-range planning and coordination to provide increased predictability to our units and greater responsiveness to CCDRs. Expansion of the AC-RC Partnership Program will align AC-RC functional and multifunctional brigades as well as increase the frequency of integrated training and partnered activities.

Regionally engaged units will expand responsive support to our CCDRs. We will continue our close collaboration and coordination between Army service component commands and corps headquarters to sustain delivery of mission-tailored total force landpower capability to CCDRs. Most decisively, we will increase momentum with leader development efforts across the operational force, with particular focus on rigorous unit home station training programs supported by improved training support systems.

Today, we are taking practical steps to prepare through planning, innovation and strengthening the resilience of our team while fully leveraging our technological and industrial edge. To prevent wars, shape outcomes or decisively win, the essential capability is a dominant land force. Air and sea power are key and necessary but not sufficient to prevail and gain decision. That requires landpower, and it is FORSCOM’s mission-essential task to prepare, mobilize and deploy the Army’s conventional land forces as the decisive capability for the geographic combatant commanders.

Gen. Mark A. Milley assumed command of U.S. Army Forces Command in August. Previously, he was the commanding general of III Corps and Fort Hood, Texas. He has held multiple command and staff positions in seven divisions and Special Forces over the last 34 years. He commanded 2nd Brigade, 10th Mountain Division (Light), in both Afghanistan and Iraq; served as the deputy commanding general (operations), 101st Airborne Division (Air Assault), Fort Campbell, Kentucky; deployed as the deputy commanding general (operations) Regional Command-East, Afghanistan; served as the Joint Staff’s deputy director regional operations J33 at the Pentagon; and served as the commanding general, 10th Mountain Division (Light) and Fort Drum, New York. Milley is a graduate of Princeton University, and he holds master’s degrees in international relations from Columbia University and national security and strategic studies from the U.S. Naval War College.