The Army is at an inflection point, where the rate of technological and geopolitical change is outstripping our capacity to anticipate, adapt and then implement transformative institutional processes to gain and maintain competitive advantage. We are combating information and knowledge-age challenges with industrial-age solutions. Few would call our acquisition and personnel management processes nimble and responsive enough to address the complex challenges of the contemporary operating environment.

After more than 25 years of unprecedented conventional combat power overmatch with long and troubled flirtations with peacekeeping, nation-building and counterinsurgency operations, we have awakened to near-peer adversaries with sophisticated anti-submarine, cyberwarfare, electronic warfare, and other anti-access/area denial capabilities. We have access to ideas and inventions that can be leveraged to gain competitive advantage in these areas if we have the will to develop, select and empower staff colonels, the innovation engines of our Army.

If the Army wants to foster a culture of innovation as senior leaders profess and doctrine proclaims, then we must innovate to create that culture. We must break from our current command-centric leader development model to build the military’s finest senior staff officers, making strategic-level staff positions sought after and progressive assignments for the best and brightest officers. Staff colonels and the talented teams that support them are the engines of the institutional Army and essential components of an innovation chain converting ideas to competitive advantage for our joint force. In short, staff colonels are key to Army innovation.

Consider how armed drones and rifle-mounted aiming lights both formed the basis of a chain of progressive activities that culminated in competitive advantage. In each case, existing technologies were cleverly integrated, refined through experimentation, fielded in sufficient mass, and employed with new tactics and training to decisive effect.

With armed drones, the missile was not the innovation. Neither was the drone, the trained operator, the communications and targeting systems, or even the capability development and budgetary and logistics processes that eventually brought that complete weapon system to the field.

Instead, the real innovation was the entire cumulative process through which decisive value—unmanned long-loiter intelligence and precision strike—was created from change—integration of existing capabilities—to gain competitive advantage—destruction of adversary leadership. Similarly, in the 1990s when small, advanced, rifle-mounted infrared aiming lights were paired with night vision goggles and employed by trained soldiers—integration of capabilities—the effect was precision nighttime small arms engagement, or decisive value, resulting in both greater lethality and force protection with smaller force structure and lighter soldier loads—in other words, competitive advantage.

Every day throughout the Army in personnel offices, motor pool bays, communications facilities, and turrets of combat vehicles, soldiers and Army civilians are developing and refining standardized operating procedures to improve mission effectiveness. Similarly, new technology is being developed in university-affiliated research centers, private industry and academia, enabling the Army to better defend its networks, navigate and communicate in satellite denied or degraded environments, maintain persistent situational awareness in urban terrain, or tackle any number of other critical challenges in the future security environment.

However, none of these inventions or activities can rise to the level of innovation unless there are skilled professionals within the Army who can convert these ideas into competitive advantage across the enterprise. That is the role of a colonel serving in a major command staff leadership assignment.

Staff colonels are the Army’s innovation center of gravity. Whether these leaders are serving as division chiefs or equivalents on the joint or Army headquarters staff, the Army Secretariat, the U.S. Army Training and Doctrine Command, the U.S. Army Forces Command, or other major commands and activities, they drive the process of institutionalizing the change at both scale and scope to create the value that commanders can implement for decisive effect.

These leaders do not typically create the change. But they have the necessary institutional and operational expertise and experience, contacts, resources and risk tolerance to manage processes across the entire framework of doctrine, organization, training, materiel, leadership and education, personnel and facilities, converting invention into competitive advantage. These processes, including documenting requirements and managing capabilities, experimentation, doctrine development, budget processes, force structure design and strategic planning, span the entire spectrum of institutional activities that run the U.S. Army.

If staff colonels are the innovation center of gravity, how is the Army as an institution focused on developing and growing our best staff colonels? The Army should remain an organization where due regard and authority are given to those officers with the command responsibility of preparing and leading soldiers to “deploy, engage, and destroy the enemies of the United States of America in close combat,” as stated in the Soldier’s Creed. That is the fundamental mission of the Army.

Changes to policy and practice should include more deliberative and predictive talent management processes, progressive broadening experiences, advanced education with focused utilization assignments, and developmental models that recognize the importance of assignment stability, institutional expertise and strategic competencies. As Michael Colarusso and David Lyle wrote in their Strategic Studies Institute report, “Senior Officer Talent Management: Fostering Institutional Adaptability,” the Army’s officer management approach “may have been sufficient during the relative equilibrium of the Cold War era, with its industrial economies, planned mobilization of conscript armies, clear adversaries, and manageable pace of change, but it is unequal to the needs of a volunteer force facing the challenges of a competitive labor market, a relative decline in American economic power, and a complex global threat and operating environment that changes at breakneck pace.” This industrial-age approach to officer management is the single greatest impediment to fostering innovation in the Army.

The Army must change leader development models and promotion and selection board instructions to recognize the criticality of senior staff assignments, selecting and incentivizing the right officers for those positions. As expressed by Colarusso and Lyle, a “rigid, time-based, up-or-out system, while fairly simple from a management perspective, engenders talent flight and is devoid of the dynamic talent management which must be implemented across the entire officer corps to ensure senior officers are equal to future national security demands.”

Regrettably, the Army is failing in this endeavor. For example, consider how the Army treats officers centrally selected for command-equivalent positions on a corps or joint task force staff, such as corps intelligence or signal officers. Despite promises to the contrary, the Army disenfranchises colonels selected for command-equivalent staff assignments with dismal promotion selection rates to brigadier general.

In a review of two officer basic branches with these type of command-equivalent staff assignments, not a single general officer of the 31 presently on active duty exclusively held a command-equivalent staff assignment as a colonel. Each had a brigade-equivalent command even though in doctrine, the Army considers both central select list staff and command positions to be equivalent key developmental assignments. Unfortunately, these practices are reinforced through mirror-imaging by these very general officers and their peers who sit on Army senior promotion boards.

A further challenge of current policy is that many primary senior staff positions are coded as follow-on assignments for those who have successfully completed command. Are those officers—rigorously screened and competitively selected for command based on their demonstrated leadership attributes and competencies—best suited for our most important staff positions in the Army? In effect, these senior staff assignments have become byproducts of successful command, not deemed worthy of specialized development, screening and selection processes independent of command boards and assignments. As a result, these staff assignments are considered a necessary evil en route to senior command instead of admirable destinations themselves for our best and brightest thinkers.

Considering the developmental requirements for these critical strategic staff officers, there are compelling arguments that it is more difficult to develop a successful division chief on the joint or headquarters staff than it is to develop a typical brigade commander. It is essential that our senior staff officers are able to successfully maneuver in this environment and drive staff processes instead of becoming victim to them.

For example, just as brigade command requires a progression of successful command assignments at the company and battalion level, an equivalent process should hold true for division chief or equivalent staff assignments. A division chief assigned to Army headquarters staff should have held two operational or strategic-level field grade staff assignments, preferably with one in the Pentagon. Simply stated, a colonel newly assigned to the Pentagon should never have to ask directions to his or her office.

Some would argue that while obviously important, staff colonels are not the innovation engines of the Army and consequently, the Army should maintain its command-centric leader development models for basic branch officers to ensure we focus efforts on basic combat readiness. Some also might argue that we have undervalued the contribution played by junior soldiers and NCOs, who routinely generate creative solutions to difficult problems, throughout the tactical Army.

While we believe innovation is often a bottom-up process driven by great ideas from the force, we also believe these great ideas languish in unit motor pools and research laboratories unless the right people—staff colonels—can harness and convert these ideas into competitive advantage for the Army. 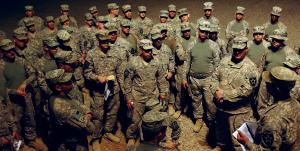 Many of our most senior military leaders have approached this challenge by focusing their energies on creating new organizational structure and special staff positions to foster innovation. However, creating innovation outposts, developing strategic initiative groups, designating chief innovation officers and even conducting special innovation conferences can become innovation theater unless the underlying processes of the military enterprise are adapted and harnessed, enabling real innovation throughout the force. How often are complex problems solved by simply creating new organizational structure?